On Alexandre, the Greatest Jewish Composer You’ve Never Heard of 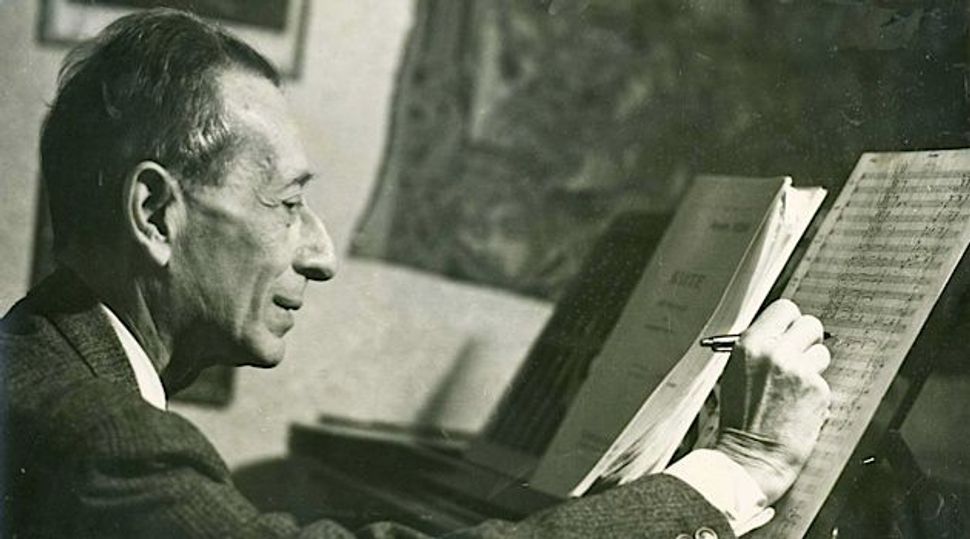 Artist at Work: Born in Poland, star composer fled the Nazis and composed an Oscar-nominated score for the 1946 film ‘Sister Kenny.’ Image by Courtesy of mireille tansman

When “Ida” received the Oscar for best foreign film, it put a global spotlight on a Polish story about that nation’s struggle to face Jewish memories from the Nazi era. Earlier this year, the Los Angeles Philharmonic gave a concert that touched on these themes in a different way.

The orchestra performed the long-awaited American premiere of the Symphony No. 4 by the late Henryk Górecki, Poland’s most famous 20th-century composer. In this piece, he paid homage to Alexandre Tansman, a Polish Jewish composer who fled the Nazis, and whose work is almost never played now though he was once a star. Górecki named his powerful symphony “Tansman Episodes” and built its harmonic structure using the letters of Tansman’s name. The program also included a piece that Tansman wrote for a close friend with whom he shared his exile in Los Angeles, “Stèle in memoriam Igor Stravinsky.”

Los Angeles Times music critic Mark Swed praised Tansman’s music, saying it had “elements of late Stravinsky in it, as well as jazzy or chest-beating elements that are not reminiscent of Stravinsky at all.” Swed called him “the most noted Polish composer” of the 20th century next to Karol Szymanowski and Górecki, citing Tansman as “an important influence” on Górecki’s haunting Symphony No. 3. That work, “The Symphony of Sorrowful Songs,” speaks to Poland’s grief under the Nazis and, in the 1990s, was the best-selling classical music recording ever.

Also, this winter, a pair of wildly gifted young Poles in a cello-piano ensemble called the Cracow Duo toured the U.S. with Tansman-centered programs, pairing his work with Chopin’s at the Weill Recital Hall in New York. All this Tansman seems to be sheer coincidence. Still, it feels fated that this season, long after Tansman’s name went underground, he would appear so frequently, a re-invigorated ghost.

Are we in the early spring of a Tansman revival? Rediscovering composers whose lives were destroyed by the Holocaust or eclipsed by World War II has become something of a rage. A growing array of Tansman recordings — his ouevre comprises over 300 works — can be heard online, along with YouTube videos that reflect Tansman’s startling variety, from the “Sonatine for Bassoon and Piano” to his stunning “Cavatina for solo guitar.” The Chandos label has released most of his nine symphonies and other major pieces. In 2010, the rising Israeli-born pianist David Greilsammer recorded Tansman’s Piano Concerto No. 2.

In a midtown Manhattan hotel lobby, I spoke with cellist Jan Kalinowski and pianist Marek Szlezer, both in their early 30s. As members of the Cracow Duo, Szlezer said they champion Tansman because “he writes with precision, but also with the jazz influences and a lot of feeling.” Kalinowski, soul patch on his chin, agreed with a nod.

“For us,” Szlezer added, “Tansman is really one of the great composers of the 20th century.”

Tansman, who was born in 1897, is considered a neo-classicist; he had an ease with traditional forms, but much of his work defies labels. It can seem well ordered at first, but the beauty has a deeper purpose. It pulls effortlessly to the center from emotional opposites, often exuberance and melancholy. His musical language blends expressive harmonies, rich but restrained melodies, and inventive rhythms, drawing on Polish dances, jazz and Spanish forms. Pianists marvel at Tansman’s feeling for 1920s jazz, which he absorbed when he toured America as a virtuoso pianist. It’s risky to ascribe moral qualities to his music, but the constant I hear — one people say reflects his personality — is a haunted but unbroken decency.

Most of Tansman’s Jewish pieces came amid the rise and fall of the Nazis, and then after the war. In 1933, when the Nazis took power, he created a series of 12 chants — “Chants Hébraïques,” he called them — after meeting a young woman from Yemen who sang Yemenite Jewish melodies to him.

“He didn’t practice the Jewish religion,” Mireille Tansman, the composer’s daughter, told me by phone from Paris, where she still lives in her father’s old apartment, among photos of him with George Gershwin and other greats. “He was agnostic. He grew up in an assimilated family but wrote beautiful Jewish works, many of them because of what happened during the war, in memory of the Jews who perished, and for the creation of the State of Israel, which moved him deeply.”

Tansman had two daughters, and they tell his story on a well-organized website, Alexandre-Tansman.com. The biographies on the website cite a turning point in Tansman’s career that came in 1919 when he moved from Poland to Paris. He went mainly to seek his fortune, but Mireille Tansman said he was also anxious about pogroms in Poland after World War I. He quickly made friends in Parisian music circles.

As articles discussing Tansman’s life in the 1920s and ’30s make evident, numerous fellow artists were drawn to his talent and forceful yet reserved manner. He interacted with Bartók, Schoenberg and Stravinsky. His pieces were played in Europe and America. Toscanini and Koussevitzky conducted his work.

He stayed busy as Europe slid into a new dark age. Joseph Goebbels marked him as a “degenerate artist.” The Tansmans fled Paris two days before the Nazis marched in, reaching America in 1941. According to Mireille Tansman, he and her mother — Collette Tansman, a concert pianist — were painfully homesick in Los Angeles. Still, he wrote both concert music and film scores. In 1944, he wrote his Symphony No. 6, a work for string quartet, chorus and orchestra that roils with anguish over the Nazi invasion of France. His score for “Sister Kenny,” a film starring Rosalind Russell, was nominated for an Oscar in 1946.

That year, when he was nearly 50, he returned to Paris. But the world he’d left behind was largely changed or gone. “It was hard,” Mireille Tansman said of his re-entry. In the 1950s, an avant-garde wave — Schoenbergian atonality, electronic music — tended to drown out more traditional members of Tansman’s generation. He kept working. “I don’t want to be a modern composer,” he said. “I think this expression is too equivocal for its very roots, implying fashion.”

Tansman expressed his Jewishness increasingly after the war. In 1950, he wrote “Isaiah the Prophet,” a piece for chorus and orchestra that treats the Jewish liturgy with an aching, steely resolve. The oratorio honors the victims of the Holocaust. Its absence from concert stages — you can hear it online — is a wrong someone should right.

In addition to responding to the Holocaust through his work, Tansman was also inspired by Jewish themes. His daughter described an evening in 1927, when he and George Gershwin went to the Yiddish theater in New York. The play they saw gave Tansman the idea for an opera about the false prophet Sabbatai Zevi, and Mireille Tansman said he was “obsessed” with writing it for 30 years. He completed the work, “The False Messiah” in 1958 and thought it the best of his seven operas. His daughter said it was played in concert in 1961, but has never been staged.

In the hands of classical guitarist Jorge Caballero, Tansman’s “Cavatina” is gaining new life. A YouTube video of him playing Tansman’s piece has gotten over 24,000 hits. A video of Russian guitarist Anna Likhacheva playing “Tansman’s Variations on a Theme by Scriabin” has been viewed over 266,000 times. But Caballero’s Tansman — and that of Andrés Segovia — stood out for me. In an email, Caballero wrote that the “Cavatina,” with its “broad harmonies and expansive melodic content,” has “captivated” him since he was a teenager.

Michael Lorimer, known as Segovia’s favorite student, told me about an exchange between Tansman and the great guitarist — an old friend and collaborator — that he observed in 1967. Lorimer had spent time studying composition with the avant-garde composer Karlheinz Stockhausen. Now, he was visiting Segovia in Spain. “The three of us sat around a table one morning,” Lorimer told me, when I visited his Upper West Side apartment. “They talked about the sorry state of modern composition. One said that composers will come to their senses and return to tonality, and the other heartily agreed.

“The idea of timelessness, for Tansman,” Lorimer continued, “was more connected with the content of what a composer says, not the idioms he uses. He said composers would repent the extremes of the 1960s. I remember looking at the two of them and thinking: ‘They have no idea about how far out things are and where they’re headed.’ Now, I look back and people did go back to tonality, just as Tansman predicted. It’s amazing,” Lorimer added, laughing. “The old guys were right!”

In other words, Tansman fits into today’s world, where composers mix atonal and tonal writing, and culture-combining music is standard. Tansman’s appeal to young performers and YouTube surfers suggests his music should be brought back to concert venues. By the time he died, in 1986, composers were fulfilling his prophecy by moving away from modernist dogma. Górecki put radical modernism to personal uses for decades before he wrote his more accessible “Symphony of Sorrowful Songs” in 1976. The piece didn’t find much of a critical welcome, and wasn’t even well known, until the popularity of a 1991 recording took everyone by surprise.

Carving someone’s name in sound is a technique that reaches from Renaissance monks who honored the Virgin Mary to 20th-century composers like Alban Berg, writing for his lover. Górecki’s Symphony No. 4 thrusts out cliff-like masses of sound, withdraws to a lost sort of murmuring, but keeps returning with insuppressible force. These giant chords shape the “Tansman Episodes.” It’s quite a story, how a Polish Catholic modernist dug up the memory of a non-modernist Jewish one.

Does anyone want to make the movie?

Allan M. Jalon is a freelance writer based in New York.

On Alexandre, the Greatest Jewish Composer You’ve Never Heard of