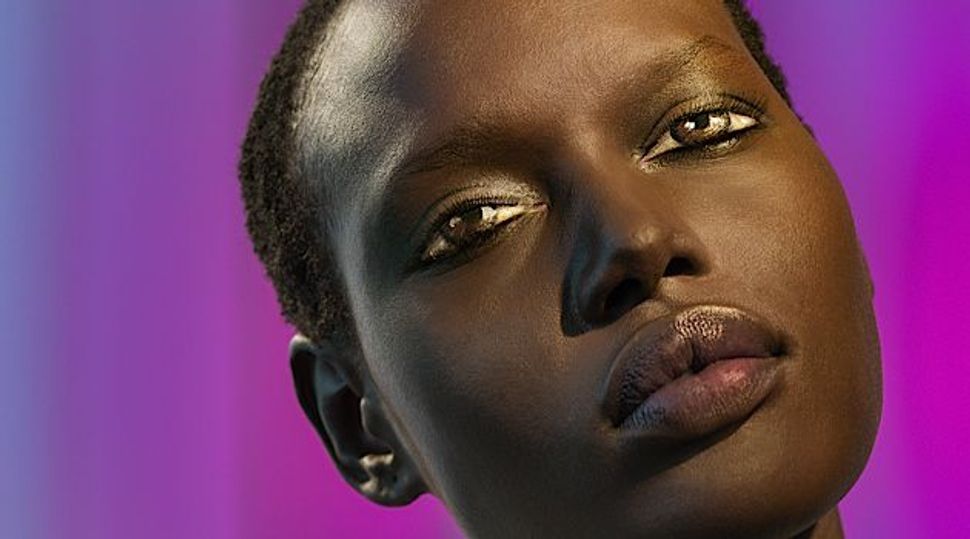 Here’s Looking at You: ‘How We See (Ajak/Violet)’ from Laurie Simmons’s exhibit at the Jewish Museum. Image by Courtesy of Laurie Simmons and Salon 94 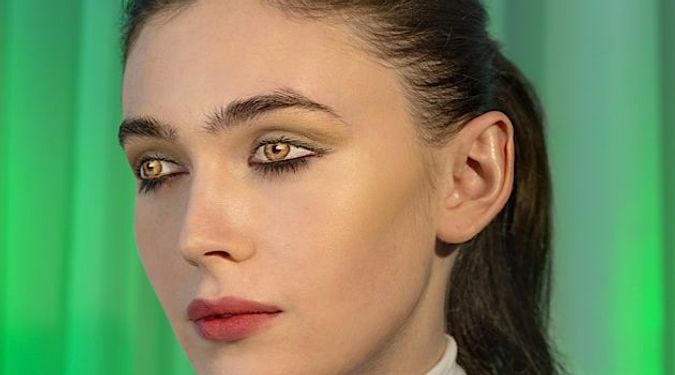 Model Subject: ‘How We See (Edie/Green)’ at the Jewish Museum. Image by Courtesy of Laurie Simmons and Salon 94

First I notice each model’s eyebrows. They are fluffy and coiffed into perfect, thick, modern arches as if ripped from this month’s glossy fashion magazines. And then below, eyes with wide-open pupils stare intensely at nothing, as if I don’t exist. I feel my reality challenged. And even more so since the eyes themselves are merely drawn on. Who knew mere makeup could cause an existential crisis?

Six of these portraits, each of a different model, are hanging in Laurie Simmons’s new exhibition, “How We See,” currently on view at the Jewish Museum in New York. Simmons photographed the models with their eyes closed, and had makeup artists Landy Dean and James Kaliardos draw new eyes on their lids. The models wear crisp white and grey blouses with embroidered details from the collections of designer Rachel Antonoff. Aside from these haunting, hollow, polarizing eyes, nothing is out of the ordinary.

The fashion model is already such an anomaly in daily life — she is thin and tall where the rest us are often the opposite — that to look at her in a setting where she is made even more unusual brings her from rarity to oddity.

“I never worked with models outside of a fashion shoot but I feel like there is something both stunning and eerie about fashion models. There’s a kind of perfection,” Simmons, 65, said when she spoke to me on the phone from her studio in New York City. “I feel like for these pictures, it made the painted-on eyes feel like even more of an interruption.”

This series was inspired by the online “doll girls” community, in which women alter their appearances through makeup and sometimes even plastic surgery to look more like porcelain dolls. Some women in this community also draw lifelike eyes on their closed lids, as Simmons chose to do for “How We See.”

“I thought that this idea of painting a real face would be just the kind of interruption I needed in the photograph to make me feel more comfortable with it, like this photograph had one foot in reality and one foot in fantasy, and I was very attracted to that. And also, almost like a little kid, I was attracted to the concept of ‘what’s wrong with this picture?’” Simmons said.

Simmons, who is well-known both as an artist and as the mother of Lena Dunham, became interested in the doll girls community while developing her 2014 project on kigurumi, a subgenre of Japanese costume play, or cosplay, in which participants dress like specific characters or ideas from a variety of animated sources for the purposes of role-play. Within the subculture, some dress like dolls in masks. For this series, Simmons dressed models in doll head masks and all variety of costumes, from beige, woolen knee socks to red latex minidresses. “When I researched the kigurumi characters and started shooting them, I was looking online and I discovered girls that kind of dress themselves up to look like Barbies and look like doll girls, and I also ended up watching lots of makeup tutorials, girls showing how to use eye makeup, putting on eyeliner and fake eyelashes and also drawing eyes on their eyelids, on their closed eyelids, and I was completely fascinated,” said Simmons.

The “How We See” series reflects the escapism inherent in dressing oneself as a doll; the incongruous faces bring us into another plane points to Simmons’s romantic desire for escape in her early life. “Really when I was growing up, I grew up in a Jewish suburb, my main thoughts were about getting away from the place I grew up,” says Simmons. “I had a very romanticized idea about leaving my childhood behind, leaving suburban life behind, and pursuing a life as an artist. I’ve always identified very deeply as a Jew [and] as a Jewish woman, but being an artist, becoming an artist was really a driving force in my life.” 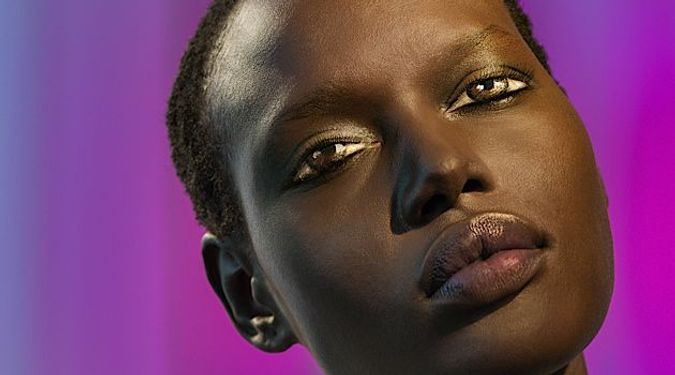 Here’s Looking at You: ‘How We See (Ajak/Violet)’ from Laurie Simmons’s exhibit at the Jewish Museum. Image by Courtesy of Laurie Simmons and Salon 94

After studying at Temple University’s Tyler School of Art in Philadelphia, Simmons began working in New York City. She saw, and still sees, herself not as a photographer but as an artist whose medium is photography. “I think when I was first exposed to photography, I believed that photography was about truth-telling and I imagined photographers going out in the streets with their cameras waiting for what’s been called the decisive moment,” she said. “And I didn’t see myself as a photographer or a street photographer or a photojournalist. I still wanted to create worlds in the studio and a camera seemed like a great way to document that. So I never had any interest in recording what I saw around me, that which really exists.”

The work Simmons made in the 1970s — first black-and-white and then color images of reappropriated dollhouse figurines and accessories that question typical social and familial constructs — made her part of what is known as the “Pictures Generation,” which includes artists like Cindy Sherman and Richard Prince, who were raised with the consumerist, mass media-driven culture of the 1950s and 1960s, and transitioned from consumers to critics.

It’s interesting to consider “How We See” in light of social media, where doll girls are so active. After all, we’re fed manufactured images of beauty and style from mass media, social or not, on a daily basis, manipulated by visuals that tell us what to be and, occasionally, how or why to be it. When we insert ourselves into the conversation on social media, we too become manipulators, manufacturing our identity to the point where our personal authenticity becomes questionable. Are we really what we say we are online? Are we really what others see online? Does it matter if our eyes are open at all?

Elyssa Goodman is a writer and photographer based in New York.