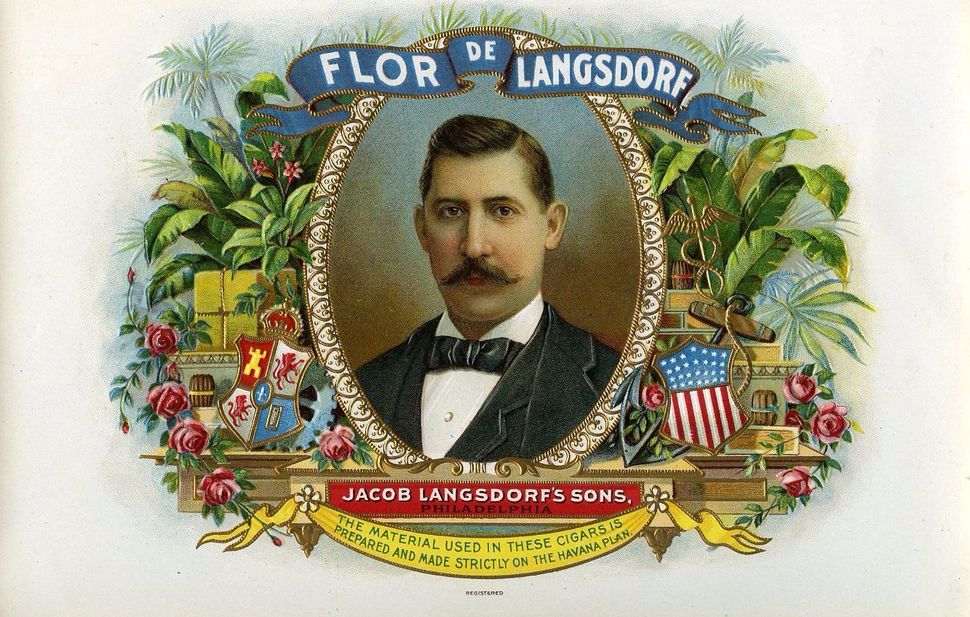 Image by Courtesy of National Museum of American Jewish History

Against the backdrop of the Liberty Bell and Independence Hall, the National Museum of American Jewish History describes the Jewish immigrant experience: the lure of freedom and economic opportunity, struggles against poverty and prejudice, the balancing act between tradition and assimilation.

Here are men and women who took risks, made discoveries, survived hardships and pioneered new forms of religious expression. The museum is national in focus, but many of its exhibits naturally draw on archives, collections and stories close to home.

On a recent afternoon, I wandered the galleries of the NMAJH’s permanent exhibition with Claire Pingel, the museum’s chief registrar and associate curator, in search of objects and images that illuminate Pennsylvania Jewish history.

Here is some of what we found:

Born in Prussia, Barnard Gratz (1738-1801) immigrated to Philadelphia in 1750s and, with his brother Michael, became a fur trader and a supporter of the revolutionary cause. Judging from a portrait — by Charles Peale Polk, circa 1792 — on loan from a private collector, Barnard Gratz took especial pride in his Jewish heritage.

Polk, a nephew of the Philadelphia painter Charles Willson Peale, depicts a white-haired Gratz seated at a table and holding a pair of folding spectacles. On the table is one of the five books of Moses; the other four are visible on shelves behind him. The association of Gratz with the Torah was highly unusual, Pingel says: “It’s significant because portraits of Jews in this period rarely included any indication that the sitter was Jewish.”

The books are impossible to identify from the portrait alone. But the collection of Congregation Mikveh Israel, Philadelphia’s oldest synagogue, contains volumes with identical bindings that were once owned by the Gratz family, Pingel says — “darker now from age.”

The Gratz family looms large in Philadelphia Jewish history. Rebecca Gratz (1781-1869), Michael Gratz’s daughter, was a noted philanthropist and educator who helped establish the Female Hebrew Benevolent Society, as well the Hebrew Sunday School Society, the Jewish Foster Home and Orphan Asylum and other organizations. Representing her philanthropy is a book containing minutes of the Female Hebrew Benevolent Society from 1845 to 1858; a facsimile page beside it is in Gratz’s hand. Founded in 1819, the society, whose mission is to help Jewish women in financial need, describes itself as the oldest Jewish charitable organization in continuous existence in the United States.

Pingel says that Gratz’s charitable endeavors had a strong religious motivation. “Gentile missionaries pressured Jews to convert to Christianity, often going into Jewish neighborhoods and proselytizing to immigrants,” she says. “So Rebecca Gratz was very interested in helping Jews remain Jews because there were a lot of forces to the contrary at the time.”

According to an 1861 federal law, a military chaplain had to be “a regularly ordained minister of some Christian denomination.” Pennsylvania’s largely Jewish 5th Cavalry, organized by Colonel Max Friedman and known as the “Cameron Dragoons” (after Pennsylvania-born U.S. Secretary of War Simon Cameron), challenged the law by selecting a Jewish chaplain.

The Army rejected the pick, but public outcry persuaded Congress to change the law, Pingel says. The museum displays the September 1862 document, signed by Lincoln and decorated with military symbols, commissioning Rabbi Jacob Frankel of Philadelphia’s Congregation Rodeph Shalom as the Army’s first Jewish chaplain. “It was something that had to be fought for,” Pingel says.

Photos from the National Farm School in Doylestown

A Jew driving a tractor? Why not? The museum exhibits 1931 photographs from the National Farm School in Doylestown showing students engaged in agricultural tasks. Founded in 1896, the school has, over the last century, evolved into Delaware Valley College, an educational institution that stresses experiential learning and offers courses in agricultural sciences.

The school began as a result of the search for alternatives to urban crowding and sweatshop labor. In 1894, Rev. Dr. Joseph Krauskopf of Philadelphia traveled to Russia, where he visited a model farm school in Odessa. He returned to found the National Farm School as “one of the best means of securing safety and happiness to the sorely afflicted of our people.” An 1897 New York Times article approvingly lays out his vision: “Instead of slaving in the sweatshops, the sons and daughters of these laborers will be glad to do better work and live happier lives on farms.”

Delaware Valley College’s website offers an even more colorful version of its history. It says that Krauskopf went to Russia to appeal to the czar to give Jews the right to own land and farm. The czar declined to grant him an audience, so Krauskopf saw Leo Tolstoy instead. The novelist is said to have advised him to “lead the tens of thousands from your congested cities to your idle, fertile lands.”

In the antebellum era, the Bavarian-born Jacob Langsdorf owned a Savannah, Georgia, tobacco plantation — destroyed, according to his family, during the Civil War. Langsdorf subsequently moved to Philadelphia, a major manufacturing hub, where he founded a cigar company that was continued into the 20th century by his five sons.

The museum displays a striking and colorful cigar-package label, circa 1905, for a brand known as “Flor de Langsdorf,” or Flower of Langsdorf. At its center is a portrait of a mustachioed man, identified by family members as Morris Langsdorf. He is surrounded by palm trees, tobacco plants and heraldic symbols representing the United States and Cuba. The label promises that “the material used in these cigars is prepared and made strictly on the Havana plan,” suggesting the high regard in which Cuban cigars were held and the likelihood that the Langsdorfs traveled to Havana to observe cigar manufacturing.

The daughter of a Philadelphia ba’al tefilah (prayer leader), Jean Gornish (1916-81) used the name “Sheindele die Chazente” (Sheindele the Cantor). “Women couldn’t be cantors, so she performed in theaters and on the radio,” where she was sponsored by the Planters Edible Oil Company, Pingel says. Her renditions of religious and folk songs were hugely popular. She wore the black satin gown and cap during concerts in Philadelphia, New York, Chicago and other cities.

A 1913 ship manifest gives her name as Chava Bein, her age as 19, her home as “Nowograd” (in modern-day Ukraine) and her profession as a dressmaker. This immigrant woman, who came to be known as Eva Baen, is represented in the exhibition by a variety of objects, including a family portrait, a table runner she embroidered during her voyage to America, her grandmother’s muffin tin and a handkerchief she made from scraps salvaged in the shirtwaist factory where she worked.

According to Pingel, Baen traveled to Philadelphia, where her uncle lived, to further her education. At night school in 1917, she wrote a letter seeking a job as a bookkeeper at the Philadelphia department store John Wanamaker’s; she addressed it to “John Vanamaker,” reflecting her own accented speech. The letter was completed as an assignment, Pingel says, and was never sent.

Jewish immigrants who settled Pennsylvania were a diverse lot. This fez belonged to Albert Hatchwell (1875–1938), whose naturalization papers record his original name as “Abraham Attouel.” Hatchwell left Constantine, Algeria, then a colony of France, in the 1890s. He settled in Philadelphia, where he met and married Matilda Levan, a native of Bulgaria.

In May 1939, more than 900 refugees, most of them German Jews, departed from Hamburg, Germany, holding Cuban visas. According to the United States Holocaust Memorial Museum, Cuba denied entry to all but 28 and, despite worldwide attention to the passengers’ plight, the United States also turned the ship away. The refugees were obliged to sail back to Europe, where they were finally offered asylum by France, Belgium, the Netherlands and the United Kingdom. According to the Holocaust Museum, 254 died during the war, many in Nazi concentration camps.

The steamer trunk represents one of the more fortunate families. The trunk, covered with decals, belonged to Josef Joseph (1882-1945), a lawyer and member of Germany’s Social Democratic Party. Traveling with his wife, Lilly, and daughter, Liesl, he chaired the ship’s passenger committee, which struggled to keep up morale.

According to an account given by Liesl Joseph Loeb to the Holocaust Museum, the Josephs disembarked at Antwerp, Belgium, and traveled to England. At one point, Josef was interned on the Isle of Man as an enemy alien. But he and his wife and daughter were able to sail from Glasgow on the SS Cameronia in August 1940 and settle in Philadelphia.

Liesl Joseph Loeb put the steamer trunk up for auction in the Port Richmond neighborhood of Philadelphia in 1995. Barry S. Slosberg, the auctioneer, recognized its value, purchased it himself, and donated it to the National Museum of American Jewish History.