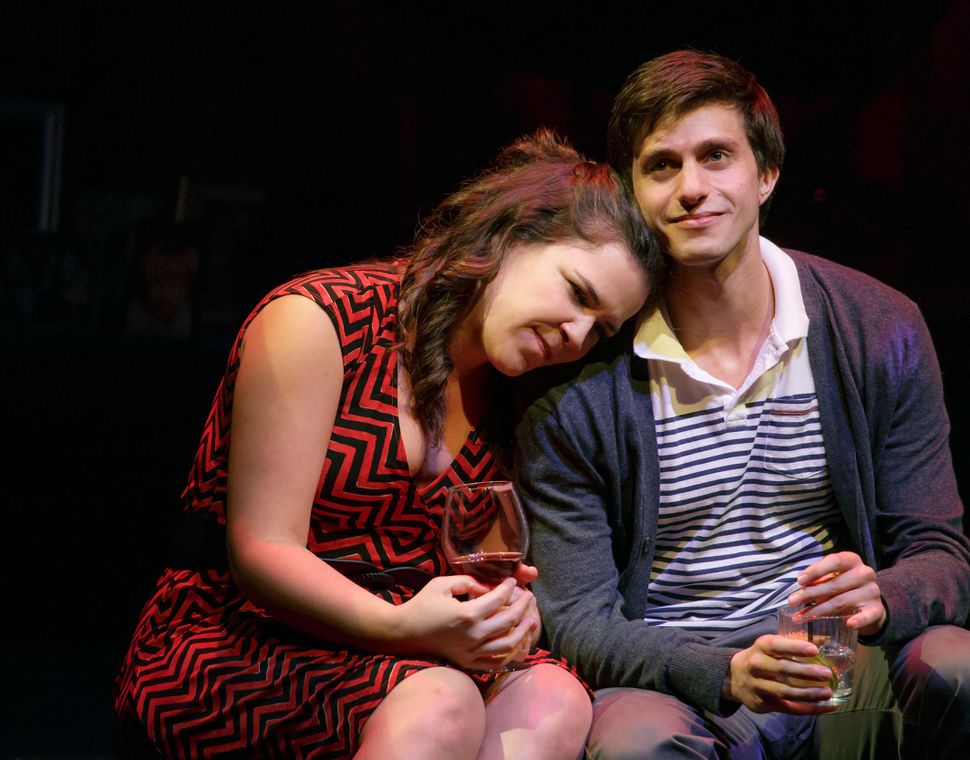 Mirror, mirror, on the wall, who’s the most marriageable of all?

According to a recent New York Times article, “How To Make Online Dating Work,” 70% of gay and lesbian couples meet online. Unfortunately, no one sent a link of that article to Jordan Berman (Gideon Glick), the gay man at the heart of Joshua Harmon’s new play, “Significant Other,” at the Laura Pels Theatre. Jordan is wandering lonely amid the marriages of his three best girlfriends: Kiki (Sas Goldberg), Vanessa (Carra Patterson) and Laura (Lindsay Mendez). Given the success of Harmon’s last play, “Bad Jews,” a J-Date-based comedy could have been expected, but “Significant Other” takes the old-fashioned route, skewering society’s most dressed-up ritual as Jordan travels between love and death — literally.

For comfort, Jordan goes to his grandmother Helene, who provides a parallel plot: Jordan is losing his friends to marriage; Helene is losing her friends to death.

“It feels like all my friends are dying,” Jordan says.

“Well, all my friends are dying, too,” says Helene says. “They’ll come back. When their husbands die. You’ll see. They’ll all come running back, wanting to play mahjong.”

Harmon sticks to his roots: The relationship between grandson and grandmother forms the center of his play. Jordan brings his grandmother her medicine; she talks to him about suicide and about relatives like his bubbe and zeyde.

And, of course, there are Jewish mother jokes!

“He’s also Jewish. Not that that matters, but we can talk about our mothers and it’s not a buzzkill,” Jordan says about a date. His date responds: “I changed my mom’s name in my phone because I got sick of seeing ‘Mom’ on my Caller ID all the time. Now when she calls, it says ‘George Clooney.’”

Harmon wants his characters to have their wedding cake comedy and eat it with a dose of post-purchase remorse. There’s the obligatory critique of the wedding industry that will hit home with any bridesmaid who has had to buy a $200 bright-purple chiffon dress. The play is a comedy, yet Harmon cannot seem to decide if his play will critique the financial aspects of modern American weddings or pander to an audience that might be partially responsible for what The New York Times reported as “a 36 percent increase in spending on bachelorette parties over the course of a year.”

“This is my bachelorette party. For my wedding. Me. Me, Jordan,” his best friend Laura says. And while some in the audience might sympathize with her, I suspect that those of us who have had city hall weddings but were forced to pay for $1,000 flights and $300 all-inclusive hotel rooms at Caribbean weddings and bachelorette parties with $200 cakes of chocolate pubic hair and genitalia (which the bride did not eat because she had been starving herself for the past three weeks), sympathize with Jordan’s rant:

“You’re still adhering to this religion of cliché with your white dress and your lady bridesmaids and their f—king matchy-matchy dresses and your cake… and then play f—king docile little wifey in others is so f—king weird, like legally changing your name.”

Jordan’s big blowout with Laura is Harmon’s attempt to deconstruct the marriage business — the crazed ladies worshipping at the altar of the goatlike and sex-starved god Bacchus — but there is better relationship drama in the play, and ultimately, an attempt to bring the conversation, and wedding convention, back to the consecration of love.

Jordan’s struggles may not be the stuff of which great plays are made — and weightier issues like money, health, race and class were left off the invite list. But Harmon’s play is a comedy in the manner of Moliere — sort of. Every Moliere play ended in marriage, but the French comic genius had a much bigger bite of social critique than Harmon proves capable of wedding into his work.

“Significant Others” may not be groundbreaking, but I laughed really hard, and really loudly, throughout it. Sometimes it’s okay to just be one more member of the party, and on the B-list of social comedies. At any rate, it’s certainly better than being married to any of these characters.