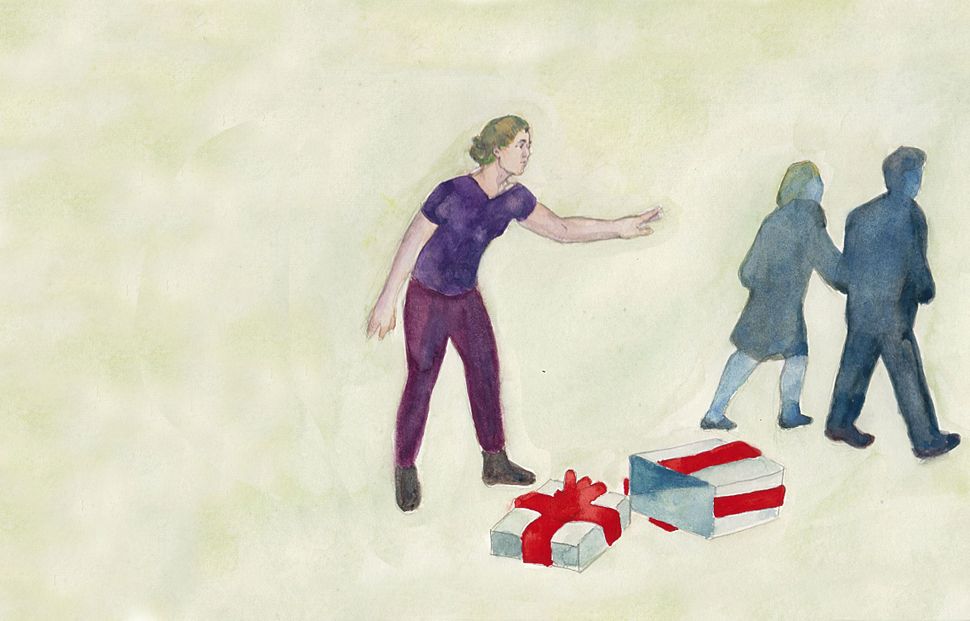 ‘When you turn 21, then you can do what you want,” my mother said over and over again. While most of my friends were counting down for tattoos and piercings that would “make the neighbors talk,” I was waiting for the day I would be able to help a couple have a baby. I still can’t recall exactly when I first felt this deep craving, but attempts at suppressing it only made it more buoyant. I always loved babies and was a total natural — a “baby whisperer,” as some still call me. My age prevented me from deciding to become a mother, but my maternal desire persisted. It was inherent.

Shortly after my birthday, I found an agency in Los Angeles that matched potential donors to recipients. I called the director and pitched myself into the world of infertility. Entering naively, I was astonished to find out that I would be paid $3,500 for my efforts — more money than I had ever had in my bank account. I also discovered something that surprised me even more: I was in demand because I was Jewish. Growing up in my town of Ventura, in Southern California, the only Jewish kids I knew were those confined within the Hebrew school walls at temple on Sundays. At public school and among my other friends, I perceived being Jewish as undesirable, and thought we must have actually been the “unchosen” ones. Judaism, to me, was full of concepts I didn’t understand, unfriendly delicacies such as gefilte fish and holidays that couldn’t even try to compete with the glory of Christmas. But at my first medical evaluation with the infertility clinic, I sat with a nurse who insisted that Jewish couples would fight over me because of my genetics. For Jewish genes, she explained, people pay a lot extra.

Stupefied and delighted, I completed giant bundles of paperwork and signed on the dotted line eight different times to make my eggs officially up for grabs. I wrote a letter for my profile folder, which would be shown to potential parents. My own handwriting read:

“I am blonde haired, green-eyed and five feet short. But that is just the beginning of the being I encompass. I am compassionate and quirky to the core; and I possess passion that is sometimes so overwhelming it completely takes over my life. I was born with loyalty that is stronger than steel, never doing wrong to those who have done right by me, and not even to those who haven’t.”

Almost immediately, I was chosen out of a book of donors by a 40-something couple in Beverly Hills, California. Their age, location and that they were very excited they found me was all I knew.

After several phases of hormone injections (and the compulsive lox cravings that got me through them), my eggs were finally aspirated during an hour-long procedure. They were then inseminated with the would-be father’s sperm and handed over for in vitro fertilization.

As with a closed adoption, my agreement, at the request of the recipient couple, prevented me from being involved at all after my donation. In fact, I would not even be permitted to know whether the couple’s attempts for a baby were successful. But I was satisfied that I had practiced and fulfilled tikkun olam, a Hebrew phrase meaning “repairing the world.” My Jewish version of “paying it forward” would be enough, I convinced myself, whether or not a bouncing bundle would come from it.

A few weeks after the aspiration, my abdomen became engulfed in pain and I was admitted to the hospital. That’s when doctors found that I had an ovarian torsion, a somewhat uncommon complication of egg donation in which rotation of the ovary causes medical problems. When the recipient couple, responsible for my medical bills, were notified of the situation and my need for follow-up care, they refused to pay. Although I had signed over to them all of the surplus eggs that were aspirated and stored for future attempts, they had just learned the initial implantation was not successful. I don’t know why they told me. They were devastated that they would not immediately be parents — and, perhaps, disgruntled with me.

It became clear over those days in the hospital and talks with the agency that I would have to take legal action in order to reap justice. There was a strong part of me that insisted I should do just that. But there was something else in me that spoke a resounding no. My act of tikkun olam created a sense of loyalty that prevented me from bowing to my anger and hurt. Perhaps I had repaired the world in some tiny way, just by giving another human hope for a baby. Perhaps my surplus eggs eventually did help give life, in the form of a child who has surely bettered the world. And perhaps the love, compassion and forgiveness of that experience changed me in ways I needed, so that I can give more to those I now know.

I moved on, wishing the recipient couple a successful pregnancy aided by my remaining eggs — eggs that suddenly felt underappreciated. Throughout the years, I have thought of this episode often, wondering what I would have done if confronted with the donation complications now, at the wiser age of 35.

I do wish the donation process turned out differently. I felt a strong connection to the recipient couple that chose me and was deflated by how I was treated. But I am incredibly proud of the 21-year-old who was able to make the difficult distinction between being betrayed and simply being hurt by those who were in pain themselves.

Although I was originally ecstatic at the demand for my Jewish genes, I now see that the act of tikkun olam itself is not where our pride should lie. It should be with our compassion when others don’t respond to our gifts with the enthusiasm we imagined. A true gift has everything to do with what is offered and nothing to do with what is received. Jewishness, I came to understand, is not in your genes — it’s in your guts.

Amy B. Scher is an expert in mind-body healing. Her next book, “How To Heal Yourself When No One Else Can” (Llewellyn Worldwide) will be out in January 2016.