PHOTOS: The Last Jews of ‘The Fiddler’s’ Shtetl 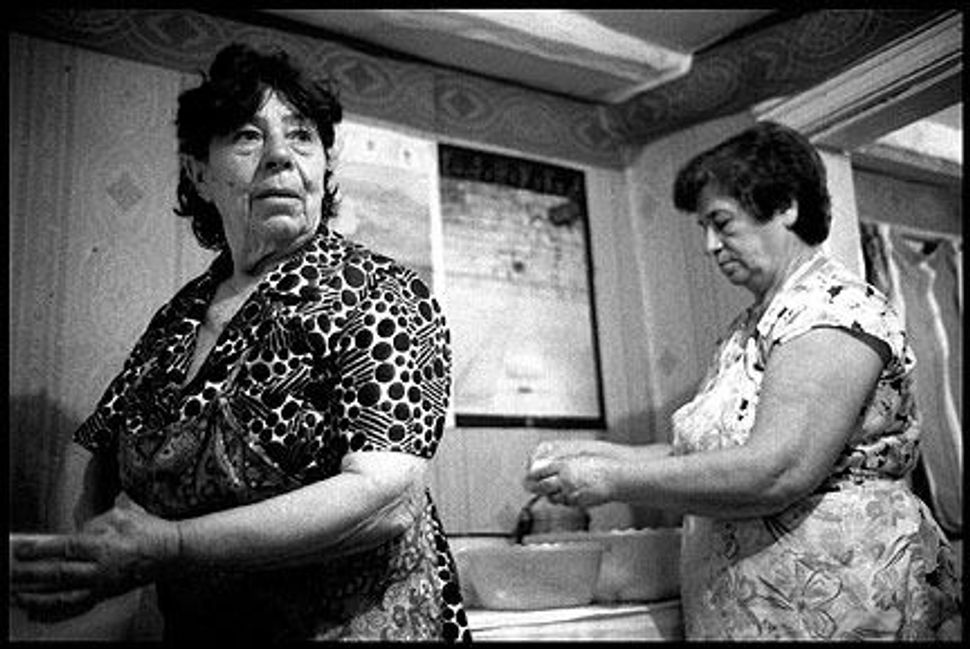 With Fiddler on the Roof opening on Broadway to rave reviews, we republish an article Edward Serotta wrote for the German newspaper Die Zeit on January 8, 1998, after he stumbled upon the former shtetl where Sholem Aleichem first started writing. None of those mentioned in this article are still living, or remain in Bogoslav today. 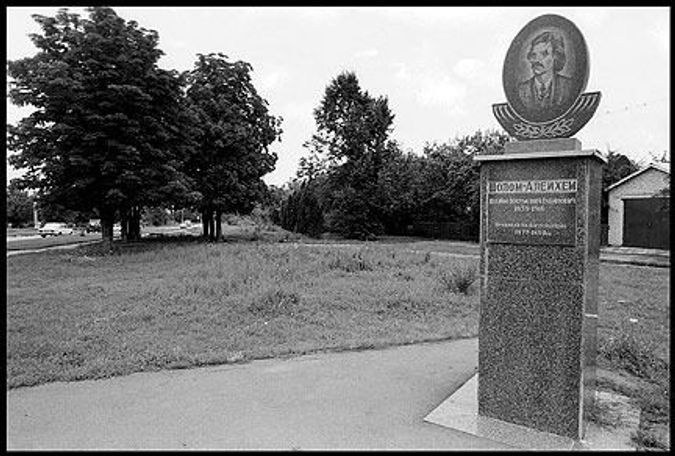 They are both the most remembered—and judging by their dire straits—the most forgotten Jews in the world, and these two hundred-plus souls live in the central Ukrainian town of Bogoslav, 80 miles south of Kiev. Sholem Aleichem, creator of the colorful characters in Fiddler on the Roof, lived here twice in his first twenty years, once as an orphan, then in 1877 as a private tutor just outside town where he began writing. Back then, 8,000 of the town’s 9,000 inhabitants were Jews. Now they make up less than 1% of its population. 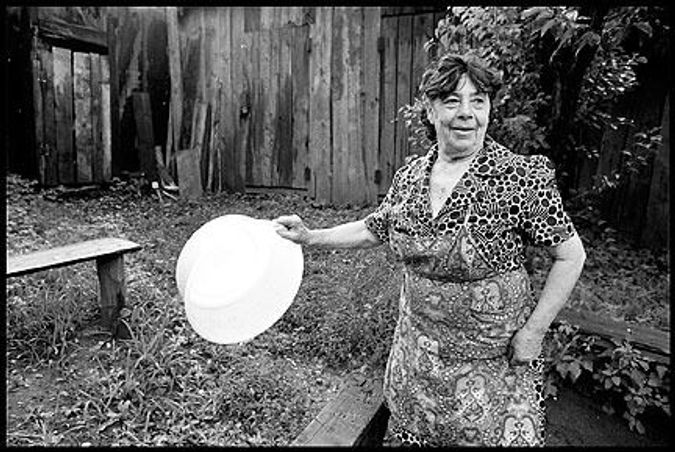 Communist rule, then the Nazis, destroyed the world of the shtetl, and although after Communism’s collapse in 1991there has been a rebirth of Jewish life in Moscow, Petersburg and Kiev, in villages like Bogoslav, this is a temporary phenomenon. It is remarkable that it is happening at all, and it began on a February night in 1993. That was when a bookish, bespectacled aid worker representing the American Jewish Joint Distribution Committee stood at a podium before two hundred ninety mostly elderly Bogoslav Jews and said, “I would like to help you form a Jewish community again.” 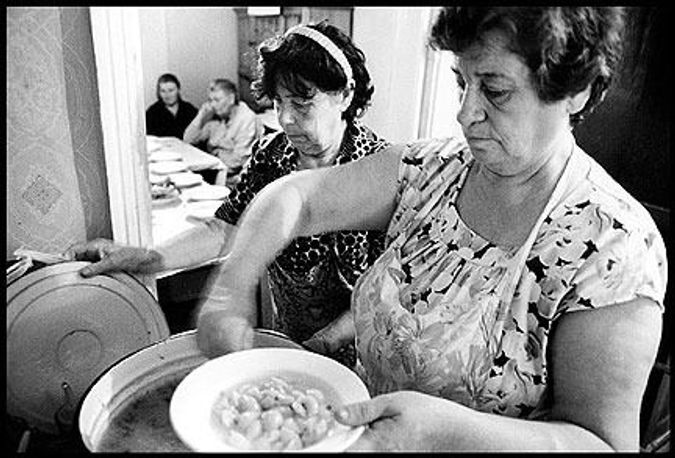 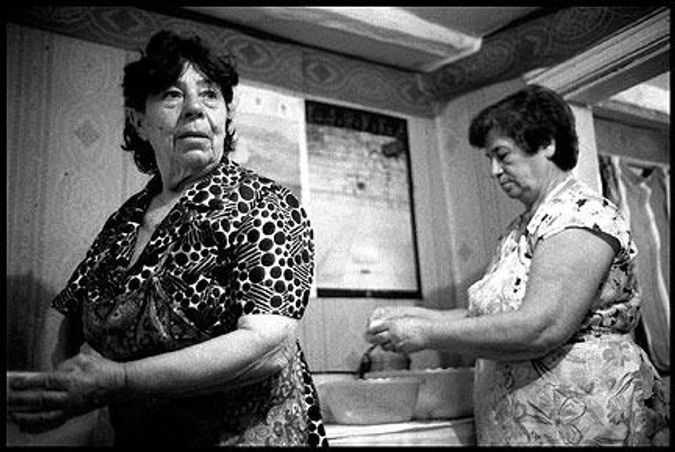 No one had said such a thing in seventy years. There hadn’t even been a Jewish meeting since Lenin’s day. The American then sat down. Boris Grinburg, a Bogoslav resident and a fireplug of a man stood up and said, “Yes, we worry about anti-Semitism and yes, we have some really big problems. No, we don’t have any money at all, but from today, one thing is sure: we don’t have to be afraid anymore.” After a short and passionate speech, in which he called for a community council to be formed, four fleshy women from Kiev took the stage and belted out Yiddish songs. Some audience members clapped in rhythm, a few tried to sing half-forgotten melodies their parents once sang to them, a few just sat and cried. 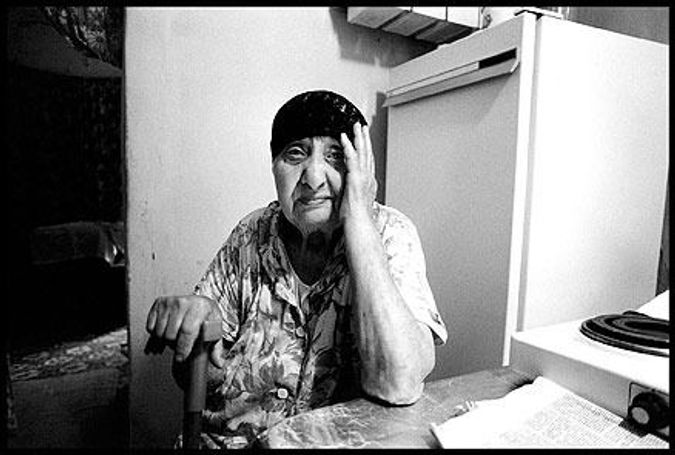 In post-Communist, stumbling-toward-capitalism Ukraine, where an entire populace struggles to make ends meet, no one suffers like the elderly—regardless of their religion. But for elderly Jews in villages like Bogoslav—many of whose only relatives are in the Nazi mass graves that dot the forests and fields—they have no one to turn to. The Conference on Jewish Material Claims Against Germany gives funds to JDC, which then channels funds to Grinburg to care for at least a few elderly Jews (“but never enough,” he mutters darkly), and the Bogoslav city council gave the reborn community a single floor of a ramshackle house (“And they should take their hats off for this?” he shrugs, looking around the cramped quarters with an outhouse in the yard). 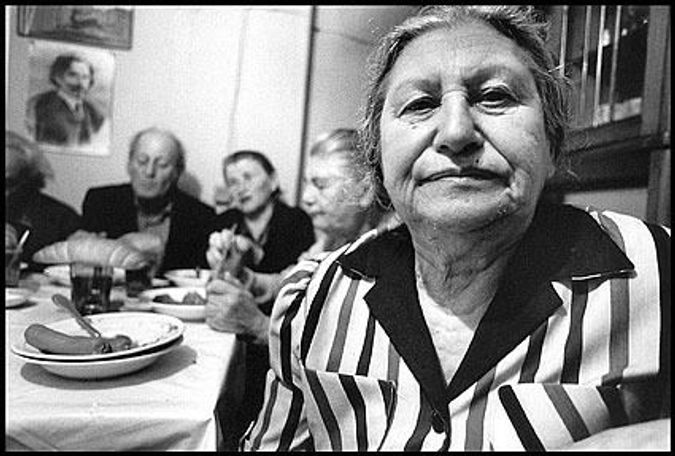 Still, five days a week, two Jewish grandmothers, Lisa Sorokin and Sofia Kailevitch, come steaming in from the local market to prepare an oversized luncheon for twelve of the neediest community members who squeeze there way around a single table, then set about delivering eight more to the house-bound. 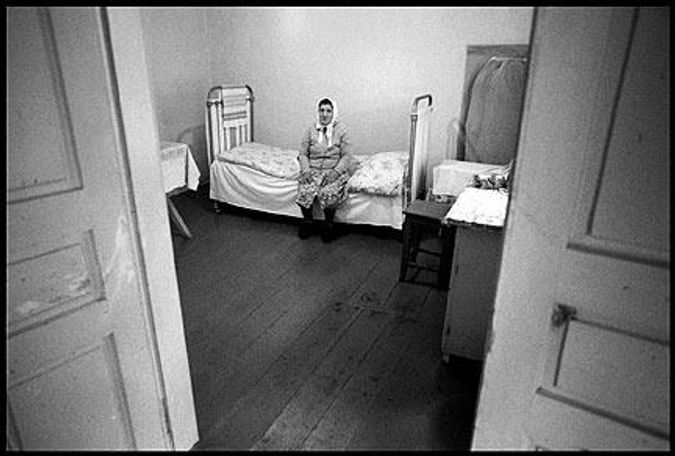 Faina Gurevich, mentally ill, receives meals and medicine daily and a community member fetches water for her each morning to wash with. She had spent the Second World War hiding in a barn; she never recovered. Faina Vasielieva, blind and in failing health, waits for Grinberg or his colleagues to visit each afternoon; she lives in a tumbledown house on the outskirts of town and the only time she has running water is when it rains. Chaya Rizhaya, whose arthritic hands are so swollen they resemble baseball mits, stands in her doorway each day waiting for Lisa and Sofia, who cook and clean for her. 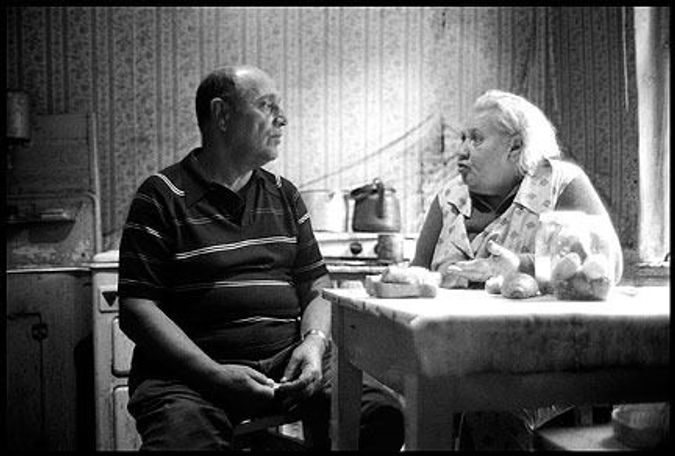 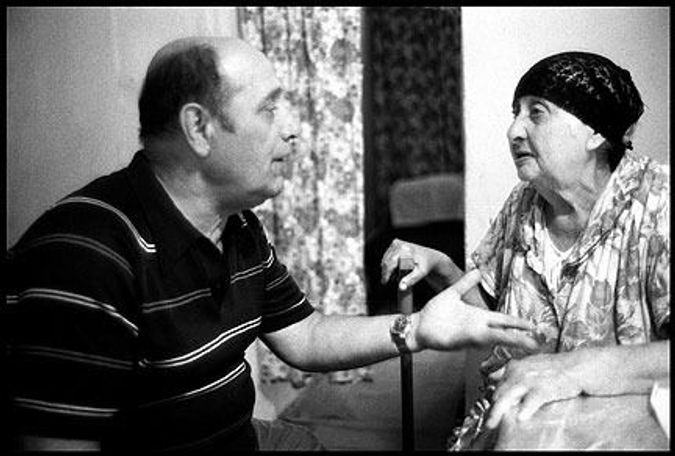 With its few young Jews departed for Israel or Germany, the Jewish community of Bogoslav—like so many other small town communities in Ukraine—is nearing its end. Still, as if to take a final curtain call, Jewish communal life in this former shtetl has taken back the stage, and players like Boris, Lisa and Sofia are running the house as best they can. While in theaters throughout the world, actors stomp, sing, dance, and mug to “If I were a Rich Man,” the real Fiddlers are still there. And they are playing to an empty house.

PHOTOS: The Last Jews of ‘The Fiddler’s’ Shtetl