Meet the Orthodox Star of Oscar-Nominated ‘Son of Saul’ 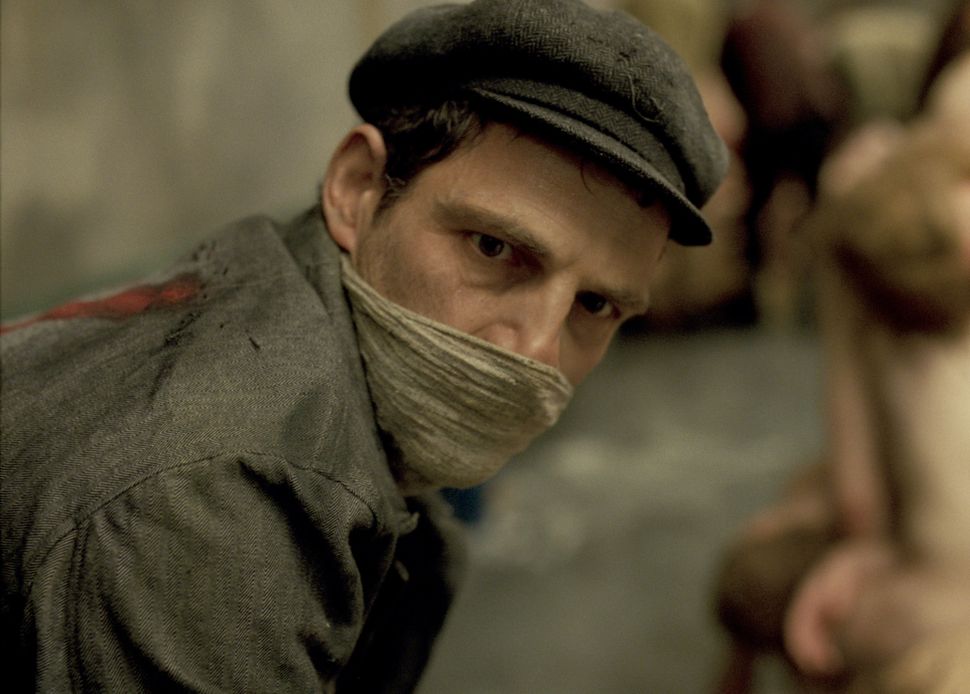 In November of 2015, Geza Rohrig, the 48 year-old Hungarian-born lead actor of “Son of Saul,” an Oscar nominee for Best Foreign Language Film, had an unexpectedly poignant moment.

In the film, Rohrig plays a member of the Sonderkommando, the units of Jewish male prisoners in the Nazi death camps who were forced to escort fellow Jews to the gas chambers, burn their bodies and shovel the ash into the river. The actor had come to the Los Angeles Film Festival together with the film’s director, Laszlo Nemes. After the screening, a member of the audience came up to Rohrig and asked him whether he would like to meet a real former member of the Sonderkommando. “There’s one who lives several blocks from here,” the man said.

“Of course I want to meet him,” Rohrig replied. Soon he was sitting with Dario Gabbai, a 93-year old Greek Jew who was deported to Aushchwitz Berkenau in 1944. Of the 950 members of the Auschwitz Sonderkommando, only 90 survived the war. The Nazis usually killed them every three months for “knowing too much” about the genocide process, and would then replace them with new arrivals. Gabbai is believed to be one of the last ones remaining.

During an interview with the Forverts, Rohrig recounted the meeting. “We went for tea, and it was fantastic just to hold his hand. He even knew some words in Hungarian.” According to Yad Vashem, more than 400,000 Hungarian Jews were burned in the crematoria at Birkenau.

Rohrig’s eagerness to embrace moments like these are one of many traits that set him apart from most film actors today. An Orthodox Jew, the author of seven books of Hungarian poetry and the married father of four children in Riverdale, NY, he is best known by family and friends by his Hebrew name, Rafi (full disclosure: Rohrig is a neighbor and good friend of mine). But after being recruited by Nemes, whom he met 8 years ago in New York, to play the lead in his first feature film, and thanks to his searing performance, Rohrig has suddenly, and a bit reluctantly, become a star.

In the film, Rohrig plays Saul Auslender, one of the Sonderkommando at Auschwitz, who discovers a boy among the dead that he believes is his son, and embarks on a quixotic mission to find a rabbi to bury him. Saul is so fixated on this task that he even refuses to join fellow members of the Sonderkommando planning an uprising against their Nazi captors.

The film has won the Golden Globe Award for best foreign film and the Grand Prix at Cannes and is Hungary’s nomination for the foreign-language Oscar. “The Guardian” called it an “astonishing debut film” and rated the film five out of five stars, as did Time Out.

But as Rohrig attends screenings of “Son of Saul” around the US and Europe, he has been dismayed by negative comments expressed by audience members regarding the Sonderkommando. One man approached him after the film, saying; ‘This guy was jeopardizing the revolt. His mission to bury the boy served no purpose.” After a showing at a Miami synagogue, another viewer exclaimed: “You guys are glorifying the collaborators.”

“No one earns the right to say anything about the Sonderkommando unless they were there,” Rohrig said softly. “It was a demonic system, to force young Jews to usher their sisters and brothers to the gas chambers. The Nazis’ goal was to kill the most Jews possible with the least number of Germans involved, and to make sure that the German executioner who administered the Zyklon B was physically and psychologically removed from the victims.”

The process developed by the Germans was, in fact, chillingly effective. Shlomo Venezia, an Italian Jew who was one of the Sonderkommando at Auschwitz, once described it in his own testimony to the Holocaust Research Project: “The door was closed. Once everyone was inside, a little truck with the Red Cross sign on its sides, drove up. A rather tall German got out… He took a can, opened it, and threw the contents in through the little opening. Then he closed the opening and left. The shouts and crying … lasted for ten or twelve minutes, then silence.”

Rohrig believes that this highly organized division of labor accounted for the ability of the Germans to kill as many Jews as they did. Additionally, Rohrig says, “by separating the murderer and the murdered, the Nazi didn’t feel any guilt, because he didn’t see the suffering.”

Rohrig and Nemes both lost relatives in the Holocaust, but Rohrig discovered this only by accident. Born in Budapest in 1967, he lost his parents when he was four years old, and after several years in an orphanage, he was adopted by Jewish friends of the family.

“I had no Jewish education but I was very close to my grandpa,” Rohrig said. One day when he was 12, as his grandfather was playing chess, he found a cardboard shoebox on top of a shelf in the wardrobe. Inside was a pile of photos. He could tell they were taken before the war due to their brownish tint and zigzag edges but didn’t recognize the people in them. Puzzled, he went over to his grandfather and asked him who they were.

His grandfather slowly put the chess pieces away and then told him that those were his own parents. It was then that Geza learned that his grandpa had lost both parents, his younger brother and older pregnant sister in Auschwitz.

The discovery made an indelible impression on the young boy. Although he experienced no anti-Semitism growing up in Budapest, he recalled an incident as a high school student of 17, not long after his grandfather passed away. “A boy passed me by in the hallway and pretended to sneeze, saying: ‘Ah-Jew!’ I confronted him in the toilet, and asked: ‘What’s the problem with the Jews?’ and slapped him hard.”

Yet, despite his success in fighting back (the boy never bothered him again), Rohrig began to sense that Jews were not safe, even though the Holocaust had long ended.

By this time, Rohrig had begun to engage in anti-Communist activities as a frontman of an underground music band called Huckleberry. Since he couldn’t attend the university without a recommendation from the Communist youth party, he decided to study in Poland where party membership wasn’t required.

While there, Rohrig spent each weekend in Crakow. “I loved it there, the jazz music, the girls, the beautiful city…” But in the back of his mind was a promise he had made to his grandfather to visit Auschwitz, about 40 minutes by train from Crakow.

One day in December, he woke up and thought: “Well, it’s going to happen anyway, so why not today?” He packed his bags, went to the town of Oswiecim, the Polish name for Auschwitz, and rented a room there.

During the 1980s, there were few visitors to Auschwitz. But Rohrig made an effort to go there every day. “I was the first to arrive and the last to leave. I never ate in the camp so I ate only at night. It was there that I found an unwanted survivor – my God. I felt sorry for Him and started nursing Him with my prayers in Hungarian. But then I realized, I don’t know Hebrew, I’m not even circumcized, so I decided then and there that I was going to be Jewish in the real sense of the word.”

During his meditative visits, he began writing poems about Auschwitz, later to become his first book of poetry, which was also translated into German. Eager to begin his formal Jewish education, Rohrig enrolled in a yeshiva in Jerusalem before moving to Manhattan in 2000 to study at the Jewish Theological Seminary.

The intense mission that he felt in reclaiming his Jewish roots was something he sees in Saul Auslender’s quest to bury his son. “Saul may not know the kaddish [Jewish prayer for the dead] but in essence, I think he is a religious man, in the same way that some secular Jews believe in tikkun olam. They’re always there for the homeless and the oppressed, which seems deeply religious to me, even though they would deny it,” Rohrig said with a smile.

But as he travels to international film festivals, giving lectures and interviews to support the film, Rohrig has also become an unexpected spokesperson for the Sonderkommando.

“I know many people find it hard to sympathize with them, but they need to understand that the Nazis forced them into playing the role of decoy ducks whose function is to fool the real ducks into thinking the water is safe,” Rohrig said. “When the Jews were taken off the trains at the camps, they were frightened and disoriented, but when they saw other Jews there speaking Yiddish, they figured it can’t be so bad.

“Even though the Sonderkommando were fed better than the other prisoners, it was only to assist in the machinery of extermination. They were under a thick and protective armor of numbness, mechanically doing their duty. In such misery, the only way to function is not to think, not to feel. The will to live becomes independent of the person.” In some cases, members of the Sondercommando, in extreme despair, snuck into the gas chamber with the other prisoners. “Those were saints,” Rohrig remarked.

“That’s why this was such an auspicious time to make the film,” he added. “In the growing absence of witnesses, we need to show people how the Nazis carried out the genocide. Two thirds of the Jews in Europe were wiped out in the Holocaust, and yet, almost every Holocaust movie that’s been produced till now tells us only about those who made it. We tell about those who didn’t.”

Meet the Orthodox Star of Oscar-Nominated ‘Son of Saul’