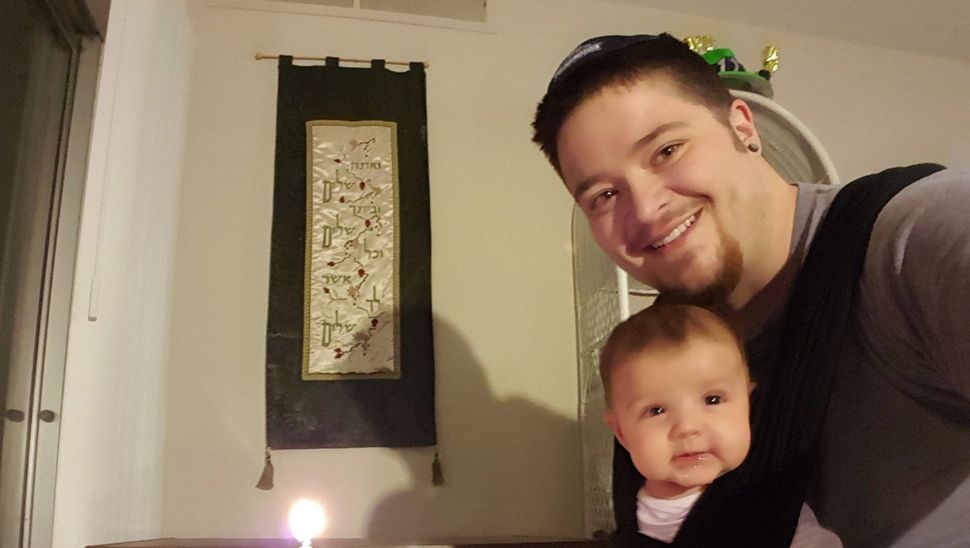 (JTA) — When Rafi Daugherty went to the hospital for the birth of his first child, he posted a sign on the delivery room door.

“I am a single transgender man having my first baby,” it read. “I use he/him/his pronouns and will be called ‘Abba’ (Hebrew for father) by the baby. Papa, Dad, Daddy, Father … are also ok.”

Rafi, 33, wanted hospital staff to be prepared for what they were about to see: a man laboring in bed. 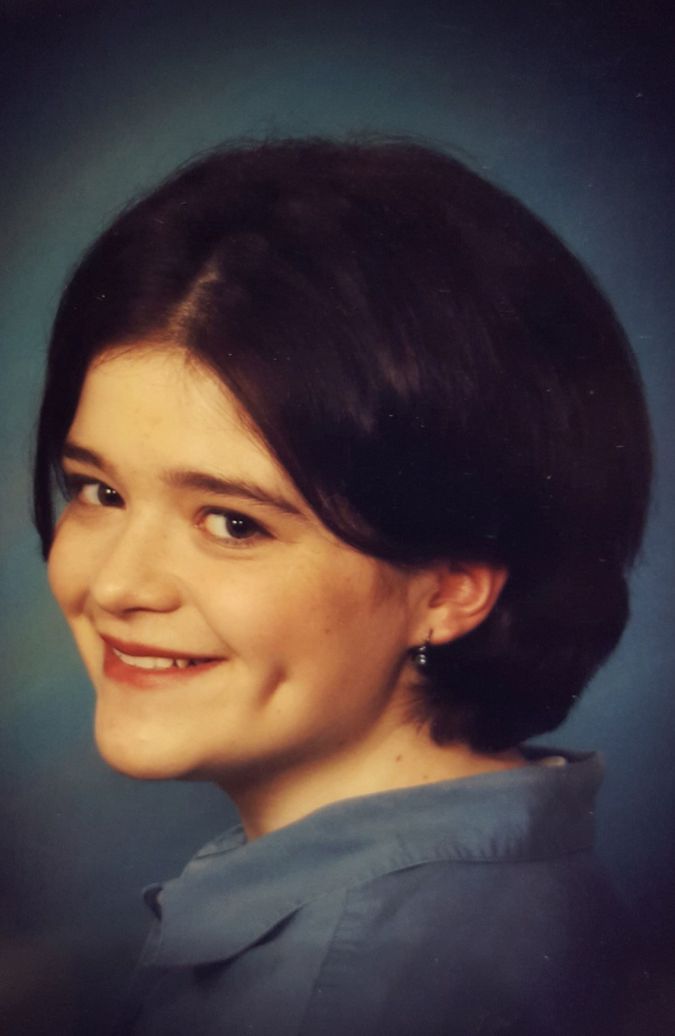 “I didn’t want them to assume that I identified as female because I was having a baby,” he said.

After eight hours of labor, Rafi was holding his 7-pound, 10-ounce daughter: Ettie Rose, named, in the Jewish tradition, for Rafi’s maternal grandmother and great-grandmother.

Since bringing Ettie home from the hospital, Rafi’s days have been filled with frequent feedings — unable to nurse, he gives his daughter donor breast milk — and diaper changes and stroller walks around his Denver neighborhood.

Nearly five months on, Ettie is a thriving infant with an impressive collection of plush seahorses.

“We got a lot of seahorse toys, for obvious reasons,” Rafi told JTA.

Obvious, that is, if you happen to know that male seahorses carry and birth their offspring.

Male pregnancy first made headlines in 2007, when Thomas Beatie, a transgender man, became pregnant — and went public with his story, posing for magazines and appearing on “Oprah.” Back then, there were virtually no resources for pregnant transmen. (“I had nothing to go by; the organizations I reached out to had nothing,” Beatie told JTA.)

That’s slowly changing thanks to nascent research, as well as the emergence of closed social media groups devoted to transmasculine birthing and infant-feeding.

Furthermore, transgender rights and inclusion are increasingly a part of public — and Jewish — discourse. That’s due in part to the recent transition of the Olympic gold medalist and reality TV star now known as Caitlyn Jenner, and the prominence of transgender characters on hit series such as “Transparent,” where the protagonist is a Jewish transwoman, and “Orange Is the New Black.”

In November, the Union for Reform Judaism issued a resolution affirming its commitment to the full equality of transgender and gender non-conforming people. The flagship Reform, Conservative and Reconstructionist seminaries welcome transgender students, and the Reform movement’s Hebrew Union College–Jewish Institute of Religion and the Reconstructionist Rabbinical College have ordained transgender rabbis.

“I have dreamed of being a parent since I was just a small child,” he said at the ceremony in October. “It’s something that has been a part of me for as long as I can recall. I remember carrying my baby dolls around and dreaming of the day that they would be real and not just fabric and plastic.”

That day would have come sooner, he explained, but he felt he had to be “the most authentic and fulfilled human that I could be before trying to raise kids,” he said. For Rafi, that involved transitioning from female to male — something that had long seemed out of the question, given his religious upbringing.

Growing up, Rafi attended a haredi Orthodox Bais Yaakov school in St. Louis. (Like many in the transgender community, Rafi is guarded about his birth name and asked that it not be published.) On Purim, he sometimes dressed up as a boy, donning a kippah and tzizit ritual fringes. 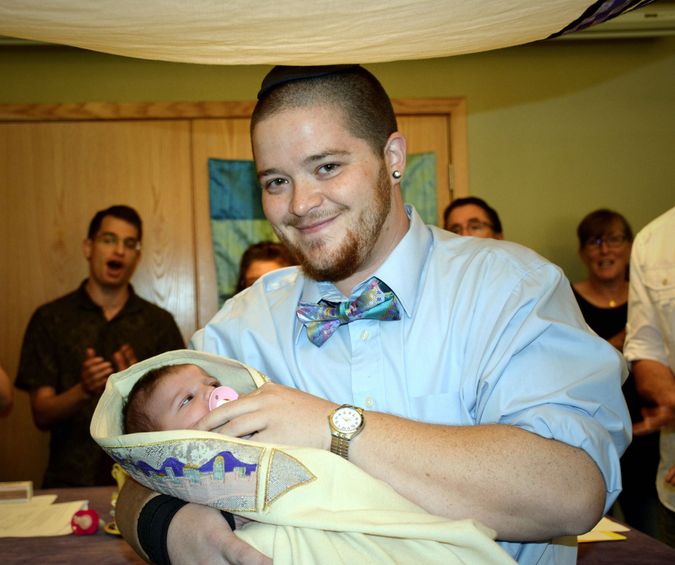 At night, young Rafi would pray to God to turn him into a boy. But because he was brought up to believe that gender is immutable, he didn’t think he had any agency in the matter.

Rafi was 21, living in New York, and in recovery for alcohol and drug addictions when he first met a transgender person.

“My immediate thought was, ‘Wow, if I wasn’t Orthodox I would totally be transgender,’” Rafi recalled during a 2012 speech to Congregation Bonai Shalom in Boulder, Colorado. “But I didn’t think God made mistakes and I always wanted to be a mommy, so I tried very hard to stay female.”

But in 2007, Rafi came out as a male. He had a renaming ceremony, becoming Rachamim Refael “Rafi” Yehoshua Ben Zechariah Leib, at Congregation Beit Simchat Torah, an LGBTQ synagogue in Manhattan. Rafi turned 25 a few weeks later and began taking testosterone. His voice became lower and hair sprouted on his chin. He then underwent chest reconstruction surgery, but opted against other procedures, such as a hysterectomy.

“I was created with a body that could create life, and I didn’t want to damage that ability,” he said.

Living as a man, Rafi was finally comfortable in his own skin.

But his transition was met with resistance from his Orthodox mother and then-stepfather, and his haredi Orthodox brother. Rafi didn’t see his mother for three years after his transition, though they have since reconciled, and his older brother has refused contact since 2007. In an interview, Rafi’s mother described herself as a doting grandmother — she attended Ettie’s simchat bat — who is trying to respect the life choices of both her children. She acknowledged, though, that she holds out hope that the daughter she raised will go back to living as a woman. (She asked that her name not be published to protect her family’s privacy.)

After college and graduate school — Rafi has a master’s degree in crisis and trauma studies from Tel Aviv University — he settled in Denver. Rafi began working as a community organizer, then a regional manager, for the Jewish LGBT advocacy group Keshet. In 2014, he took a job at Ramah Outdoor Adventure, a Jewish camp affiliated with the Conservative movement; he is now the director of camper care.

“We welcomed Rafi as a Jewish leader, and one that pushed us to live our value of being open and accepting,” said the camp’s executive director, Rabbi Eliav Bock.

Summer session 2015 at Ramah Outdoor Adventure, which serves children in grades 3–12, coincided with the third trimester of Rafi’s pregnancy. Rafi was met with a round of applause when he told the camp staff his news. But he asked his colleagues not to discuss his pregnancy with campers, who, Rafi said, “just thought I was a fat dude.” But by the end of the summer, with Bock’s blessing, Rafi disclosed to the high school-age campers that he was pregnant.

Rafi became pregnant by artificial insemination. The sperm donor is a friend whom Rafi described as “a tall, dark and handsome gay man, who is half South Asian.”

“He’s expressed gratitude to be part of this journey for us,” Rafi added, “and not have to deal with the diapers and the crying.”

In 2014, the journal Obstetrics and Gynecology published a groundbreaking study that drew on data from 41 people who had been pregnant and given birth following a female-to-male transition. The study showed use of the male hormone testosterone did not seem to prevent conception, though some respondents who conceived reported being turned away when they sought prenatal care and facing insensitive comments from health care providers.

Rafi did run up against records software that wouldn’t allow hospital staff to enter the name of a father without first entering the name of a mother. He was ultimately successful in changing the birth certificate to reflect what Rafi called “the truth of our family”: that Rafi is Ettie’s father.

In recent months, Rafi has become accustomed to the assumptions people make when he and his daughter are out and about: that Ettie is adopted, for example, or that Rafi has a spouse at home. (Rafi is single, but open to a relationship; he said he’s attracted to “androgynous to masculine” individuals.)

“I’m getting used to saying, ‘I’m transgender and I gave birth to her,’” Rafi said, “so that Ettie can be empowered to know her story and share her story, and not feel like it’s something embarrassing or weird.”