‘Yidlife Crisis’ Takes Off — With Assist From Mayim Bialik 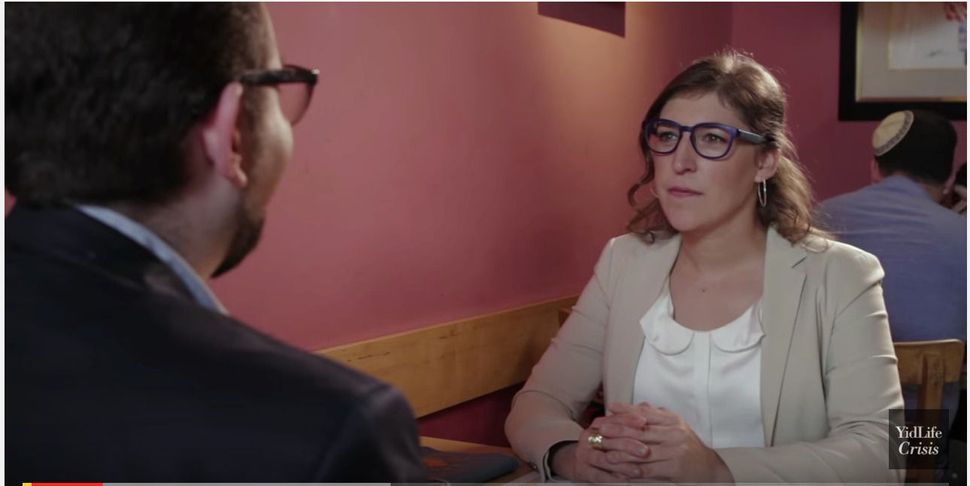 Eli Batalion and Jamie Elman, the co-creators and stars of the online Yiddish-language sitcom “YidLife Crisis” have been on a roll in the past few months.

The comedic duo was recently nominated for a Canadian Screen Award for best original digital media series and has taken their act on the road, performing a live version of their show in Krakow, Tel Aviv, Toronto, Montreal, Los Angeles and Birmingham, England. The pair has also received a prestigious grant from the Natan Fund and will soon release a series of five travelogues featuring their impressions of Tel Aviv. The first two episodes of YidLife Crisis’s second season have already been viewed more than 100,000 times on Youtube and the comedians have just released a Valentine’s Day episode guest-staring the Mayim Bialik. I caught up with Eli and Jamie to find out more about their trips and what it was like to work with the “Big Bang Theory” star.

Speaking with the Forward from Los Angeles (Jamie) and Montreal (Eli) the longtime friends noted that their trip to Krakow “was great.”

“We really enjoyed it,” Eli added. “We did a show in a 16th century synagogue. It was really interesting to see the city because there’s lots of cool stuff there. The Jewish quarter has become hip like the Lower East Side. There are four synagogues there within a half mile radius.”

Eli explained that their appearance, sponsored by the local JCC, like most of their live shows included two portions: a live performance in English and a screening of several episodes of their sitcom in Yiddish.

“People seemed to like our material,” Jamie said. “The Jewish community there is primarily made up of non-Jews so they impressed us a lot with their Judaic knowledge. It was a very different crowd than we’re used to because it wasn’t just a Jewish audience. We couldn’t tell during the show if they were into it but we heard great feedback afterwards.”

In England the two took their act to the annual Limmud conference, an intense five-day gathering held in Birmingham that attracted over 3,000 participants. As part of Limmud they recorded a talk for the online series JDOV, a sort of Jewish answer to Ted Talks. During their JDOV talk the duo reflected on the origins of their show.

“We decided to do something based on the very real conversations that we had together,” Eli noted during the talk. “We tried to square this traditional Jewish upbringing that we came from (with) this totally secular adult world that we had encountered. And we decided to do it in the Yiddish language for a variety of reasons: to preserve the language, to pay tribute to our upbringing and to make a little comedic nod to our Jewish comedy heroes, many of which we believe were deeply influenced by a Yiddish comedy tradition.”

After reading off a computer screen for the first part of their talk the duo transitioned into a staged argument, appearing to go completely off-script while fighting over the authenticity of their Jewish identities. As they shouted at each other over the perceived hypocrisies in their religious practice the debate echoed the frequent fights between their Yiddish-speaking alter-egos, Chaimi and Leyzer, who spend the bulk of each episode of YidLife Crisis arguing about the merits of different elements of Jewish tradition. After finishing their staged argument Jamie, who plays the proud heretic Chaimi and Eli, who plays the more observant Leyzer, explained that the basis of their series is the debates that they have among themselves about their sometimes contradictory relationship to Jewish tradition.

“It’s the struggle of identity that we battle within each other and within ourselves,” noted Jaime. “It’s the struggle that is as old as that between God and Jonah and Abraham and Moses, between Hillel and Shammai, Dzigan and Schumacher and now in our own admittedly ridiculous way – us.”

In Tel Aviv the comedians met up with Mendy Cahan, the director of the Yiddish cultural center Yung Yiddish and visited Jaffa, where Arab merchants still yell “alte zakhn” (used goods) even though nobody at the marketplace speaks Yiddish anymore. The duo also attended Tel Aviv’s famous Gay Pride Parade.

“Tel Aviv is an awesome city,” Eli told me over the phone. “With our series of travelogues we’re trying to show different perspectives of the city which will hopefully flip peoples’ pre-conceptions of it.”

In one episode Jamie and Eli set off on a self-directed tour of Tel Aviv’s Central Bus Station. Widely notorious as perhaps the seediest place in Israel the duo checks out a sex shop located conveniently in the station. Whether done purposefully or not the short interlude spent jokingly examining dildos serves as a poignant contrast to their time spent looking over the thousands of high-brow Yiddish books and literary journals stored at Yung Yiddish’s headquarters in the same station. The fact that one of the largest collections of Yiddish literature in Israel is relegated to sharing space in a half-abandoned bus station with sex shops serves as a profound, if perhaps inadvertent, meditation on just how marginalized Yiddish culture has become in Israel.

Despite the many interesting moments in their new travelogue series YidLife Crisis will undoubtedly receive more attention than the films of their trips thanks to the duo’s recent collaboration with Mayim Bialik. Bialik, a distant relative of Israel’s national poet Haim Nahman Bialik, grew up in a Reform-Jewish household and learned Yiddish from her mother. Although best known for her role as neuroscientist Amy Farrah Fowler Bialik herself holds a PhD in neuroscience and is prominent as perhaps the most famous religious Jewish actress in Hollywood. Appropriately enough Bialik’s character on “YidLife Crisis” is also a religious Jewish neuroscientist. Bialik’s Chaya is a no-nonsense woman who has no time for romance and would rather seek a suitable husband by asking potential suitors awkward and probing questions. Batalion’s Leyzer and Elman’s Chami both end up on a Shidduch date with her after she decides that it’s more efficient to interrogate them both at once than to get to know them separately.

Asked how the two relatively unknown comedians managed to attract such a famous celebrity guest-star for their web-series Jamie recalled that they first reached out to Bialik through “official channels.”

“The idea was to show it to her because we thought that she would dig it.” Jamie said. “We showed her an episode from the first season and she tweeted about it… We have a friend in Los Angeles and he reviewed our LA show for the Jewish Journal and she tweeted that too so we tried to pin her down for an episode. We heard in August that she would be in Montreal to be the keynote speaker at the (Jewish) Federation’s campaign launch. We met up with her that night right when she flew in; she was only in town for 12 hours and we brought her gluten-free Kosher bagels.”

Eli added that they pitched the episode to her and that she liked the idea and gave them a list of dates when she would be available. Bialik rehearsed with them for a day in Los Angeles and helped to fine tune some of the dialogue. “We’d like to emphasize how much of a pro she was and how generous she was with us,” Jamie said. “It was a ‘mekhaye’ (delight) to work with her.”

As far as their future plans the comedic duo hopes to make more episodes with celebrities in order to raise the profile of both Yiddish and themselves. They’re also planning a series of trips and hope to make new episodes of their travelogue series in Jewish communities in Australia and Latin America.

A version of this story originally appeared on the Yiddish Forward.

‘Yidlife Crisis’ Takes Off — With Assist From Mayim Bialik