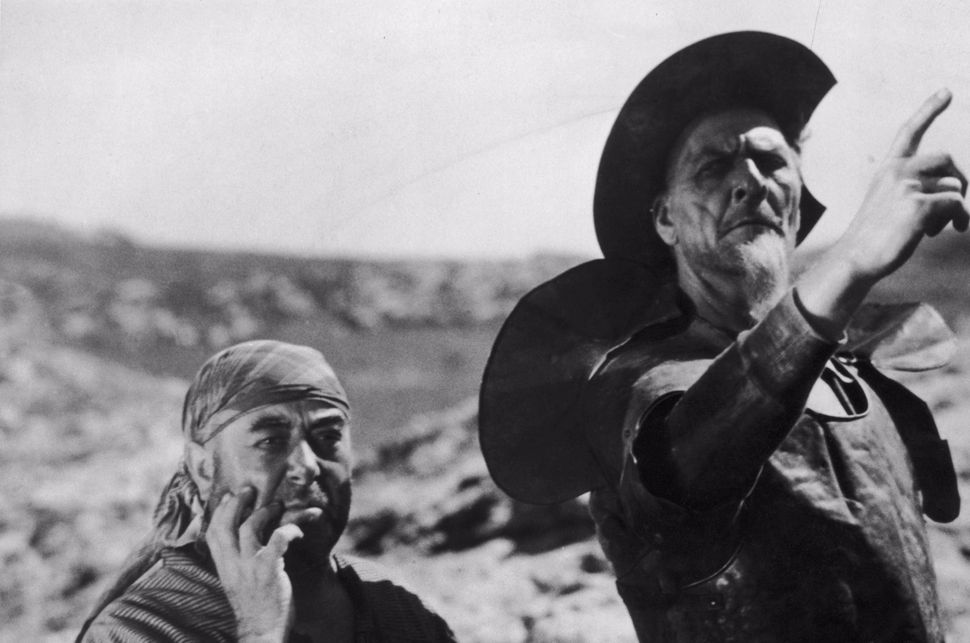 April 22 marked the 400th anniversary of the death of the Spanish novelist and playwright Miguel de Cervantes, who was likely born into a family of conversos, Spanish Jews forced in 1492 to convert to Christianity or leave their homeland. Jewish themes have been discerned by some readers in Cervantes’ “Don Quixote.” In time to commemorate the occasion, “The Forward’s” Benjamin Ivry spoke with Ruth Fine, professor of Spanish Literature at the Hebrew University and president of The Israeli Association of Hispanists. Currently working on “A Comprehensive Study of the Presence of the Old Testament and Jewish Elements in the Work of Cervantes,” the Argentinian-born Professor Fine shared insights about Spain’s celebrated author.

Benjamin Ivry: There are some indications that Cervantes was from a family of conversos. Is there any reason for thinking Cervantes was not of Jewish origin?

Ruth Fine: Well actually, the traditional view mainly from Spanish philology never considered the possibility that Cervantes was of Jewish origin. They always defended the notion that he came from the lower Spanish nobility. The arguments against Cervantes’ Jewish origins are two: that there is no concrete document to testify to this and that Cervantes claimed he was of pure [non-Jewish] blood and had to produce a document to receive a position in Italy. But we know that such documents were falsified many times, and the people who testified for the document did not know his family.

In a 2001 article, María del Carmen Artigas goes a step further, asserting that Cervantes “had to be a practicing Jew.” Is this plausible, or does the search for secret meanings and references mean that a literary masterpiece has been overstudied?

I tend to agree with your second hypothesis. I don’t see any reason to suspect he was a Crypto-Jew or Marrano or practicing Jew. Cervantes knew a lot about Judaism because he spent five years in Algiers where he had contact with Jews, and also in Italy.

In your review of “Cervantes and the Jews” by Luis Landa (Ben-Gurion University Press) you point out, “The Jew in the work of Cervantes is relatively free to believe and practice his religion – just the opposite of the reality of Spain.” Was this wishful thinking by Cervantes?

It could be, or it could also be that he was practicing irony in a broad sense, and this was meant ironically. Cervantes was turning a mirror to the Spanish public and showing them another reality that exists somewhere else, to let them see the miserable context they were living in. He does this in other respects as well. It’s obvious in his play “The Sultan’s Queen,” where a Jewish doctor hosts a Spanish Christian, when so clearly the reality was different at the time.

In a 2005 interview with “Haaretz,”, Professor Landa said that in Israel, if someone says “don’t be a Don Quixote,” they mean “sit still, don’t be an idiot.” Is the character still seen this way in Israel?

I extremely respect Professor Landa’s opinions but would not agree in this respect. This is not something particular to Israel. Anthony Close wrote about all the meanings of being a Quixote in the world, and one was being driven by false dreams, not exactly an idiot or silly person. Benyamin Netanyahu has used the image of Don Quixote and windmills quite a lot in speeches, and I think he means having unrealistic dreams, but I would not say that this is the stereotypical interpretation.

Cervantes was a great believer that sharing in dialogue with someone else, a kind of confession that is not the same as the Catholic form of confession, was a good way of curing or reaching a certain introspection. Not the whole Freudian theory, but dialogue as a way to take an introspective route, is very Cervantesque.

When the poet Hayim Nahman Bialik adapted “Don Quixote” into Hebrew, since he did not know Spanish, he apparently translated from a Russian-language version. Yet supposedly he was admitted to the Royal Spanish Academy.

That’s not true. In the prologue to his translation, Bialik says that he has been supported and also advised by the greatest Hispanists in the world. Suggesting that he was part of the Hispanist milieu was probably the origin of that myth. In Bialik’s prologue, he suggests that the whole intentionality of “Don Quixote” is close to Judaism. Don Quixote was an underdog in Spain, and decided to confront that situation through books, and it is clear in the novel, and surprising for the period, that he cared so much for people who suffered. So maybe that is what Bialik meant when he suggested that Don Quixote should have been Jewish.

In Part I Chapter IX of Cervantes’ novel, Don Quixote refers to Arabic pamphlets he saw in Toledo, claiming he could have found a translator for a “better and older language” than Arabic. Readers, including Santiago Trancón see this as a reference to Hebrew; if so, what does it imply?

Yes, of course. I have no doubt, and not only me, but also editors of the “Quixote” who are conservative in this respect, all agree that he is making a reference to Hebrew, and this is an intriguing question. Who are those people he could find who know Hebrew in the middle of the 16th century when the novel takes place, although it was written in the 17th century, two or three generations after the Expulsion? Either he was referring to Crypto-Jews, or possibly he was again being ironical. Or perhaps he was referring to Spanish universities, where Hebrew was still being studied.

In “The Travels of Benjamin III,” Mendele Mocher Sforim depicts a Jewish Don Quixote driven mad by 19th century European anti-Semitism rather than by books of chivalry. Were Jews of the Diaspora formerly given few choices but to be Don Quixotes?

Mendele’s book is about a Jew who read the Talmud and because of that became crazy. Books were a way to escape a hard reality. Cervantes is a symbol of how books, literature, fiction, are a way of constructing an alternate reality as a way of making life liveable, but this is at the heart of almost every book written after “Don Quixote.”

S. Y. Agnon’s novel “The Bridal Canopy” set in the 19th century shtetls of Galicia, the unworldly protagonist Reb Yudel has been seen by some as a Don Quixote figure. Yet isn’t Agnon’s Hassidic narrative considerably gentler than Cervantes’ or Mendele Mocher Sforim’s satire?

I completely agree, it’s a soft way of following the model, and not in the same direction. Agnon was preoccupied with nostalgia, rereading the Midrash and the Bible, profoundly immersed in the idiosyncratic frame of the shtetl and Jewish Diaspora.

Isn’t a major mystery about Cervantes how, towards the end of a difficult life of middling achievement, he managed to create this immortal book?

The mystery is that he got published in the best publishing house of the time as a nobody, an unknown writer already old and without resources. And also probably a New Christian. This is the great mystery, of how he did it.

Why does Cervantes attract such odd commentaries?

I would say that Cervantes attracts even more odd theories than Shakespeare. Cervantes said in the first chapter of the second part of “Don Quixote” that children would understood his book one way and older readers in another way. He knew his book was able to meet readers at all different levels. It is an enigmatic book, with the possibility of unending subjects. This quality or condition is really his genius, triggering so many odd readings, as you say. You know the book has also been interpreted as having been originally written in Arabic by a crypto-Muslim. The religious, sexual, and political interpretations are really infinite.