Viewing the World Through Chicken Goggles 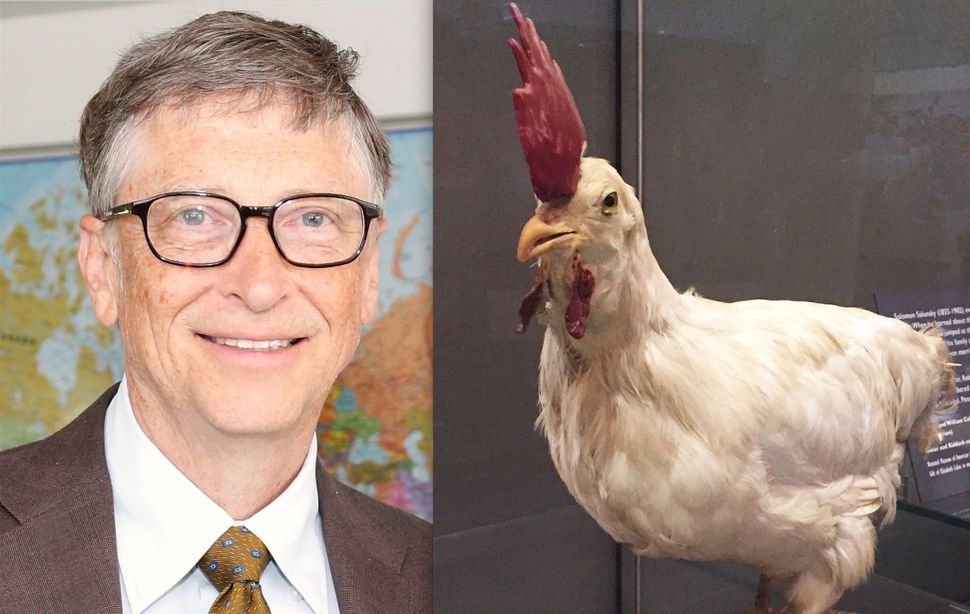 Victors? Bill Gates would raise chickens, Meg O’Day laid an egg a day for a year in 1956. Image by DFID/NMAJH

History is written by the victor which is why when Bill Gates said in late June that he would raise chickens the world listened. The authority of Meg O’Day — an award-winning hen from 1956-1957 who is stuffed and presiding over a public installation in the lobby of the National Museum of American Jewish History — is less clear.

Meg was a leghorn from Gus Stern’s New Jersey farm who won a contest for laying an egg a day at his Vineland farm at a time when the state was the fifth biggest producer of eggs in the nation. And, until the end of August, you too can visit her vitrine for free as part of “Locally Grown: Jersey’s Jewish Farms” the summer installation at NMAJH in Philadelphia. Partly driven by Jewish farms around Vineland, the pre-refrigeration egg industry — and the Holocaust survivors working there — is what people remember about New Jersey’s Jewish farms. 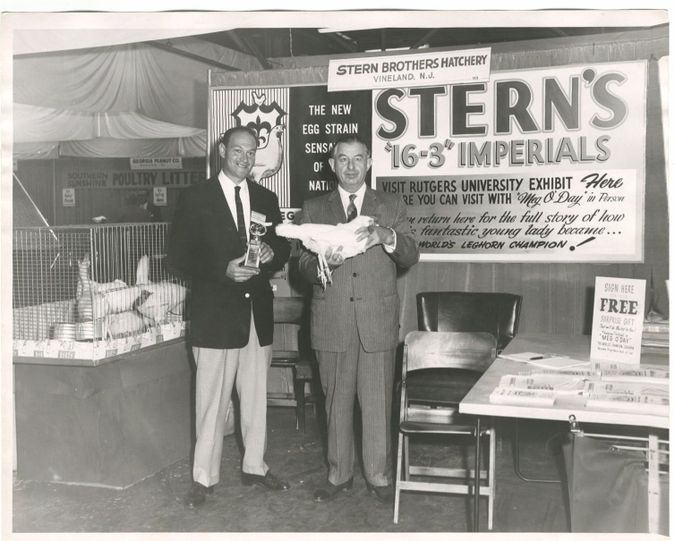 In Her Pomp: Meg O’Day on display with her trophy at the Stern stand. Image by Courtesy of NMAJH

But those economic winners were the atypical tip of the national Jewish farming iceberg that had formed slowly over the previous century. This installation — based around a specific donation by farmers’ descendants and curated by Claire Pingel — takes off our chicken goggles (of which more below) and gestures beyond the tip, to nearly two centuries of diverse farming.

Pushed from Eastern Europe by pogroms and anti-Semitic economic laws, pulled to the New World by the promise of opportunity and placed on the land by philanthropists from Western Europe like Baron Maurice de Hirsch, Russian and Polish Jews were scattered in what now seem a myriad of unlikely places. For example some, like Rachel Bella Kahn (better known as Rachel Calof because of her 1936 memoir under her married name) ended up digging the dirt in North Dakota (Calof, specifically, arrived at the alluringly named Devil’s Lake), the first “Am Olam” settlement was in an old plantation in Louisiana and, using Russian science and New World soil, Jewish farmers in Argentina were able to grow sunflowers as a crop for the first time. 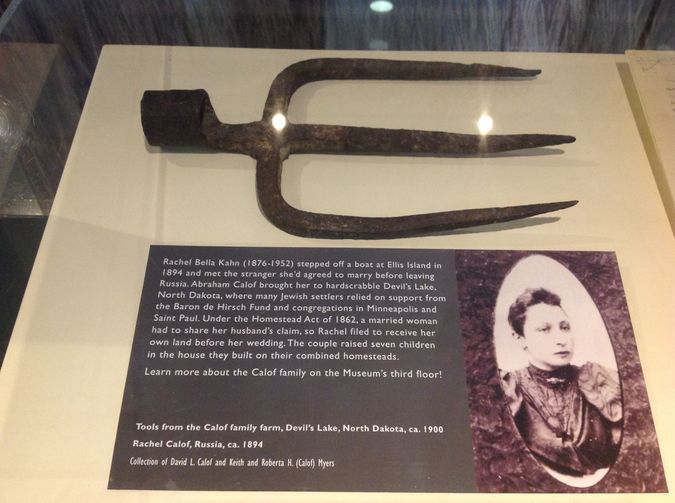 Lady From Devil’s Lake: Rachel Calof arrived in North Dakora in 1895 and wrote her memoirs in 1936. Image by Courtesy of NMAJH

Sidebar: The Homestead Act of 1862 provided land to those who would settle and work it for a minimum of five Years. Jewish aid organizations like Am Olam, Alliance Israelite Universelle and the Hebrew Immigrant Aid Society based their support on similar stipulations that the immigrants would farm for a length of time. Because the United States government recognized the law of coverture — according to which wives were property of husbands until surprisingly late in the twentieth century — women like Calof would come, apply for homestead land while they were single and their own legal agent before marrying and joining their land to their husband’s.

Ideologically, too, communities were excited to come to the New World and live on farms. The idea of working the land appealed to those who lived in crowded industrial cities but such a productive lifestyle was also a lived rebuttal to anti-Semitic caricatures of Jews as economic parasites. A particular idea of usefulness from the European Enlightenment had heavily influenced the philosophy of the Haskala, or Jewish enlightenment, and prompted various responses including Bundist self-government, Zionism and a Jewish back-to-the-land movement.

From 1881 onwards, refugees and immigrants were settled on the land and helped to farm it. Contrary to popular misconceptions, although Jews were often forbidden to own land back in Europe, many of the early settlers — up to a quarter of them — did have farming experience. But that wasn’t enough to help them overcome poor land, isolated locations and vulnerability to extreme weather. Floods, droughts, distant or impoverished markets and simple population attrition put paid to many of the settlements.

Many remote locations like Clarion, Utah, and Cotopaxi, Colorado, failed, but New Jersey, by and large, succeeded. It was successful because of its proximity to markets and its pre-existing infrastructure connecting the nearby cities to local farms and settlements established by Germans and Italians. The train lines brought piece work in, delivered it out and connected the Jewish settlements to a market that helped it diversity its revenue streams and also stay in touch with those donors who were facilitating their induction into American life.

Of course, if a quarter of settlers had farming experience, three quarters didn’t. And even those with experience could learn more. In 1896 Rabbi Joseph Krauskopf, a Reform rabbi fresh from a trip to Europe founded the National Farm School in Doylestown, Pennsylvania, with the intention of teaching practical skills to young Jewish men (sadly not women). 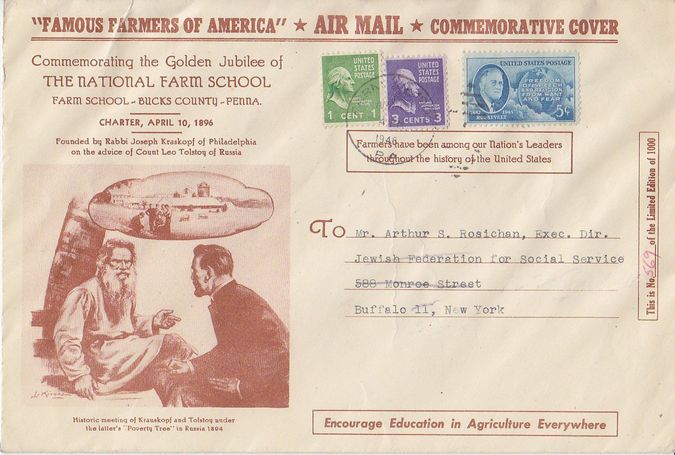 Tolstoy and the Rabbi: The founding of the National Farm School in 1896 was credited to a meeting with the famous Russian writer. Image by Courtesy of National Museum of American Jewish History, Philadelphia

The founding myth of the school is that Krauskopf saw Count Leo Tolstoy the famous writer (and sometime farm-owner) while he was visiting the Pale of Settlement in Russia. Pictures of the two of them can be seen on the celebratory Golden Jubilee letter envelope on display at the installation. The story goes that Krauskopf came upon Tolstoy sitting outside and asked him whether he should set up a farming school whereupon Tolstoy said yes. It’s a convenient mythology but, given the school’s longevity (it still exists, now known as Delaware Valley University), it has proven an effective basis.

But the area was also responsible for industrial innovation. The installation has some hilarious looking chicken goggles. Designed to stop hens scratching each other’s eyes out — a serious matter — they make any casual visitor wonder how the workers manually fitted these onto thousands of chickens. 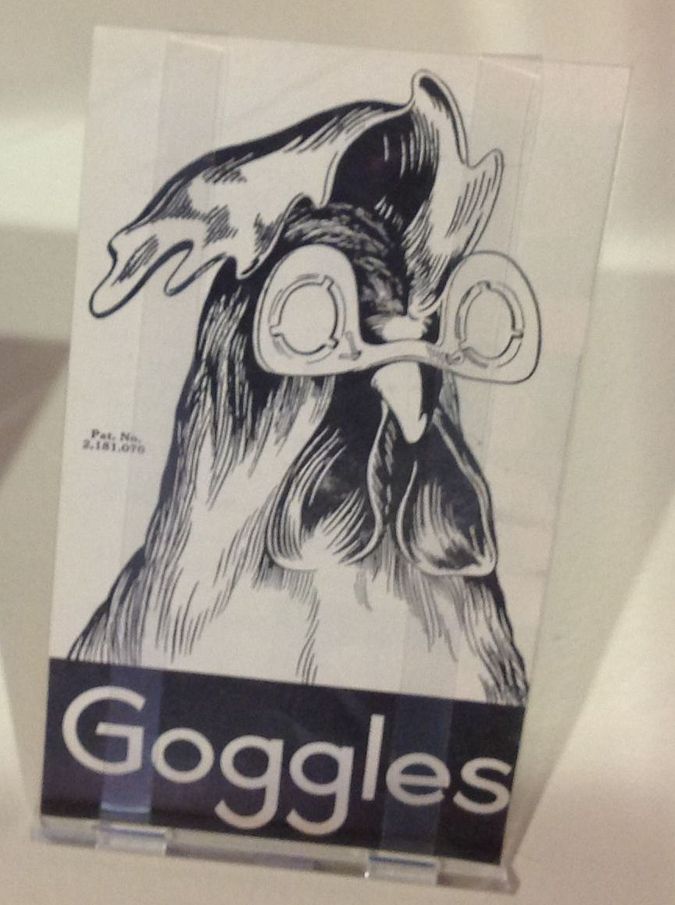 Hen Fashion: These chicken goggles prevented birds from harming one another. Image by Courtesy of NMAJH

Now a new generation is developing a new relationship to the land and the food it provides. They are forging a closer, more organic bond to the land (sometimes, literally, the exact land) that their families farmed in previous generations. Although the play area at the end of the exhibit, with toy chicks and toy produce, is designed to serve the younger visitors who arrive with school or camp groups, it reflects the eagerness of a section of millennial Jews to get down in the American dirt and escape — if not the tyranny of the Tsar, then the the hegemony of agro-business. 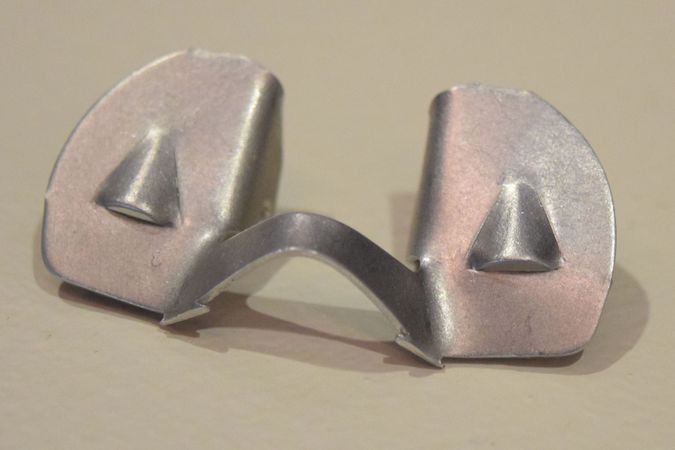 For Your Protection, Ladies: These chicken goggles forced the chickens to look down, and prevented hen-pecking. Image by Courtesy of National Museum of American Jewish History, Philadelphia

“Locally Grown: Jersey’s Jewish Farms” is on view now at the National Museum of American Jewish Heritage in Philadelphia, until August 28.

Viewing the World Through Chicken Goggles