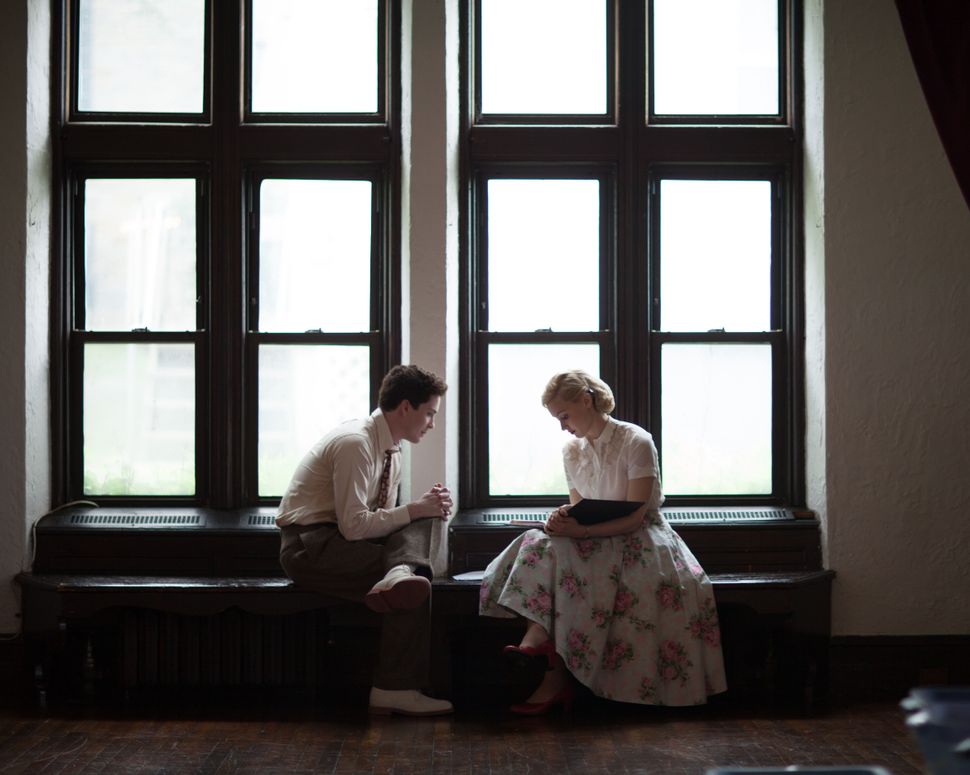 The title “Indignation” doesn’t suggest a movie about nostalgia. But “Indignation,” directed by James Schamus and based the 2008 novel by Philip Roth, is about nostalgia in its purest form — about the way time slips through our fingers, about the bittersweet solace of memory, and about how every choice has unforeseen and irreversible consequences.

Like other Roth novels, “Indignation” is set partly in Jewish Newark, New Jersey, in the early 1950s. While elsewhere Roth has described his upbringing in the city as provincial and stifling, here we are given a more affectionate portrait. The Jewish community is insular, but also close and supportive. Everyone knows everyone else, and everyone knows Marcus Messner (Logan Lerman), the intelligent, handsome, well-behaved young man who can often be found behind the counter of his family’s kosher butcher shop.

But outside this peaceful enclave, danger looms. The Korean War is raging, threatening to swallow up Newark’s young men just as World War II did to their brothers and cousins before them. In an early scene we see parents saying Kaddish and sitting shiva for their son, a high school friend of Marcus who was recently killed in combat.

Such a fate seems unlikely to befall Markie, as his family calls him; he is a good son and a good student. Instead of following his hardworking father (Danny Burstein) and mother (Linda Emond) into the kosher meat business, he’s going to college in Winesburg, Ohio, and will be exempt from the draft. But it’s no spoiler to say that Marcus meets the same end as his friend. Even before we see him in Newark, we see a flash-forward to Korea. “There are reasons you die,” the narrator tells us. “There are causes.” The only question is, what were those causes? What went wrong?

As in many of Roth’s books, much of the drama in “Indignation” comes from the contrast between the homey comfort of Jewish Newark and the cool gentility of WASP society. And Winesburg College, with its quaint brick buildings and obsession with “tradition,” is a near perfect representation of that world.

There are shades of “School Ties” here — that classic 1992 movie about prep school anti-Semitism — but on the whole, Marcus and his fellow Jewish students face no overt bigotry. Although they are forced to attend chapel, there are easy enough ways to avoid that requirement. And though they are confined to their own fraternity, they make the most of it through a combination of academic and extracurricular achievement, and through the charismatic personality of their president, Sonny Cottler (Pico Alexander).

It isn’t anti-Semitism that produces the antagonisms that form the heart of the movie. Instead it’s Marcus’s own stubborn idealism — his indignation, you might say — that produces one conflict after the next, each case a potential cause for his expulsion and his death in Korea. Following the structure of Roth’s book, the movie becomes a series of heated dialogues between Marcus and other characters. And while this isn’t a bad thing per se, the dialogue, which is often lifted straight from the page, seems stilted and artificial onscreen despite the actors’ best efforts to make it sound natural.

In a series of escalating scenes, we see Marcus fight both with peers and with authority figures, and while his arguments are inevitably justified, his passion for pursuing them seems increasingly foolhardy.

He fights with an American history professor about the Puritans, whose accommodation of nonbelievers he believes was hypocritical.

He refuses to join the Jewish fraternity; this leads to a heated telephone exchange with his father, who has become almost pathologically concerned with his son’s welfare.

He fights with his roommates, a monosyllabic lunk who hardly budges from his desk (Philip Ettinger) and a flamboyant theater kid (Ben Rosenfield) who blasts Beethoven on the record player and recites Shakespeare ad nauseum.

When Marcus decides to switch rooms, he is called to a meeting with Dean Caudwell (Tracy Letts) that devolves into a fight over a host of issues aside from housing: about whether his father should be described as a “kosher butcher” or just a “butcher”; about his objection to the chapel requirement not as a Jew but as an atheist; about the philosophy and morality of Bertrand Russell; about whether he should try out for the varsity baseball team.

And we see Marcus wander over to the precipice in the most stereotypical way of all: through a relationship with a woman.

And it’s Olivia who provides the most nostalgic element of the movie. In Roth’s novel the story is narrated by Marcus himself, speaking to us from beyond the grave. The afterlife here is nothing but a memory, a perfect novelist’s device. That doesn’t work as well in a film, however, so instead Schamus shows us Olivia as an old woman in a nursing home, gazing into the middle distance against a backdrop of rose-patterned wallpaper.

Here the whole story seems to be taking place in her memory, including that afternoon in the hospital, when the light came in just so and the joy of young love was at its most pure. Instead of the moment recurring eternally in the mind of a dead man, it plays over in the mind of an old woman whose life, it is intimated, has not had much in the way of joy or fulfillment in the meantime.

In the end, what gets Marcus expelled and sent to Korea isn’t his argument with the dean or his relationship with Olivia or his fights with his roommates. But it happens nonetheless, and in his dying moments he, too, thinks about that moment when “someone did love you.” There is solace here in the memory, and tragedy in its passing. Try as we might, it is impossible to hold on.

Ezra Glinter is the critic-at-large of the Forward and the editor of the forthcoming “Have I Got a Story for You: More Than a Century of Fiction From the Forward” (W.W. Norton & Company). He is currently writing a biography of the Lubavitcher rebbe for Yale University Press. Contact him at glinter@forward. com or on Twitter, @EzraG