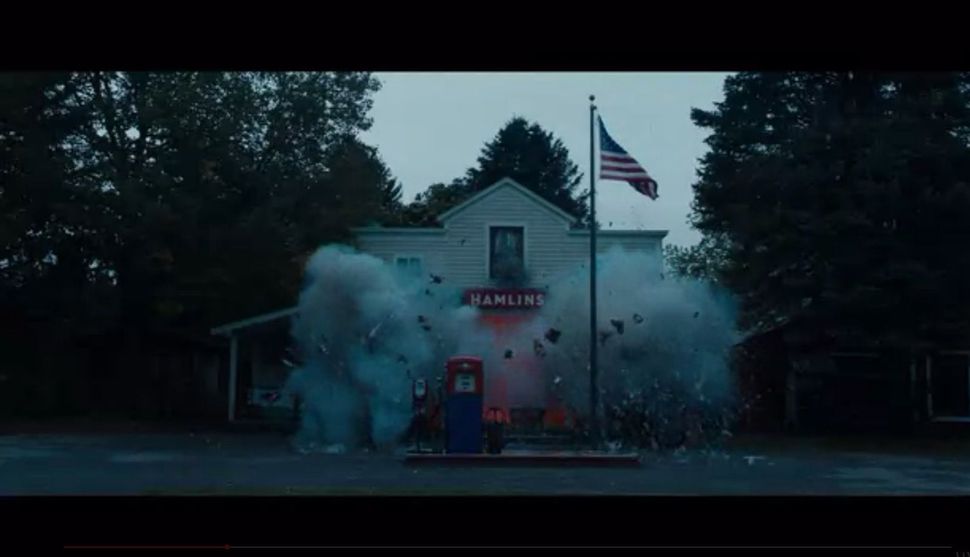 Tears for Fears Meet Philip Roth: The trailer for ‘American Pastoral’ has everything. Image by courtesy of lionsgate

No one does dystopia quite like the Jews. We claim no monopoly but, after Hitler (and to paraphrase Walter Pater), all dystopias all aspire to the condition of Jewish tragedy.

And it seems that the official anthem for dystopias is 1982’s “Mad World,” by Tears for Fears.

It’s not always used for obvious sadness. Here is a version that would surely have tickled and bemused Ralph Baer, creator of the video game, Pong. In this montage for BoingBoing, players lose their lives in a variety of different iconic early video games to an 8-bit cover of “Mad World.”

But it comes as little surprise that Jewish tragic genius and Tears for Fears’s lugubrious melancholy have intersected at the highest level of popular culture — the trailer of Philip Roth’s “American Pastoral.” (for full trailer see bottom of article)

There’s certainly something vulnerable about the original and, as illustrated by Lorde’s cover of “Everybody Wants to Rule the World” for the “Hunger Games” franchise, emo music of the 1980s seems particularly suited to breathless female singers of the twenty teens.

Ewan McGregor (born the week after me, but whom I have never yet met) — here in his directorial debut — has chosen to use one of the favorite songs of our shared British childhood to evoke a perfect world gone wrong. But, in keeping with contemporary aesthetics, he has chosen Jasmine Thompson’s version to express dreamlike corruption. (H/t Karst de Jong for ID)

Amazon also clearly enjoyed the hopeless, deadly quality of the song when they used the song for the trailer for their television version of Philip K. Dick’s “The Man in the High Castle.” They used historical sequences intercut with singer Ilana Tarutina walking and singing as if her face were frozen into a passionless rictus.

Of course it’s not just women who have covered the song. Adam Lambert hauntingly covered it on “The Voice” in 2009 — albeit at an octave above Lorde’s range. That, along with the 2001 remix by Gary Jules for “Donnie Darko” (starring Jake Gyllenhaal), kept the song in the public eye over the decades.

As with all great songs, there are a myriad covers. My favorites include this ska punk cover by King Tuts Revenge, this drum and bass remix by DJ Yogi and this vintage vaudeville-style cover featuring Puddles Pity Party and Haley Reinhart.

Until the movie itself comes out, I leave you to investigate the other 40 versions of the song you can find at the amazing Aimless Direction list.

Watch this on The Scene.