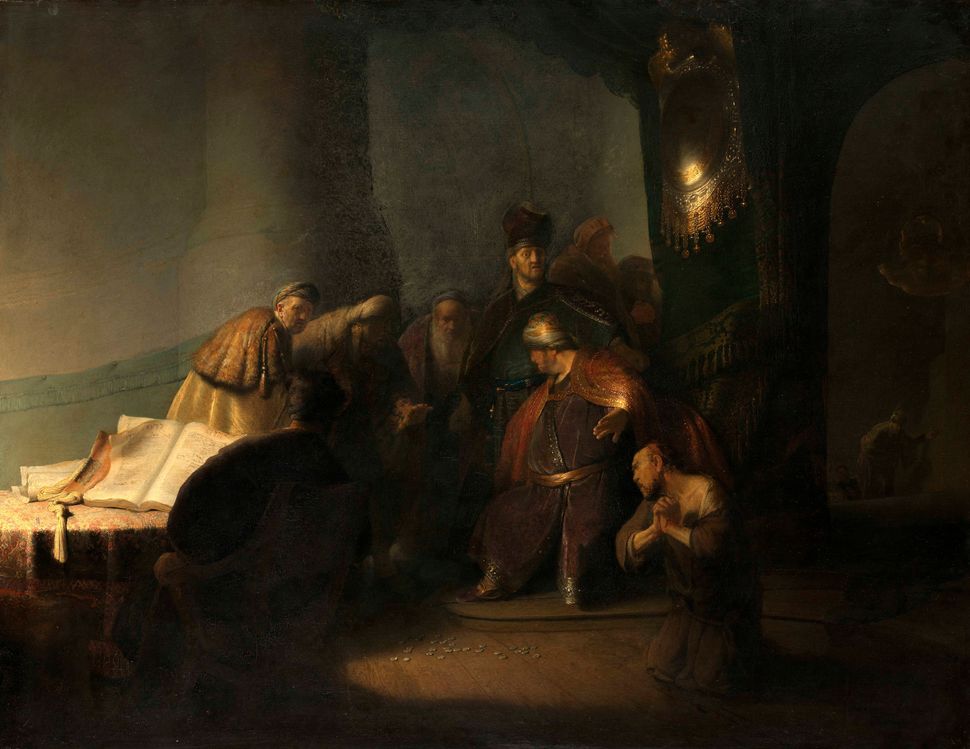 Image by Courtesy of the National Gallery of London

Prior to 1629, when the 23-year-old Rembrandt painted “Judas Returning the Thirty Pieces of Silver,” the scene, the culmination of the biblical episode long associated with anti-Semitism that has come to epitomize greediness and selling out, had been treated only a handful of times in art.

The narrative, which appears only in the book of Matthew (27:3–5), inspired a 1548 etching, at Washington’s National Gallery by German artist Augustin Hirschvogel, who depicted Judas with a money bag around his neck, throwing coins at the feet of Jewish priests. 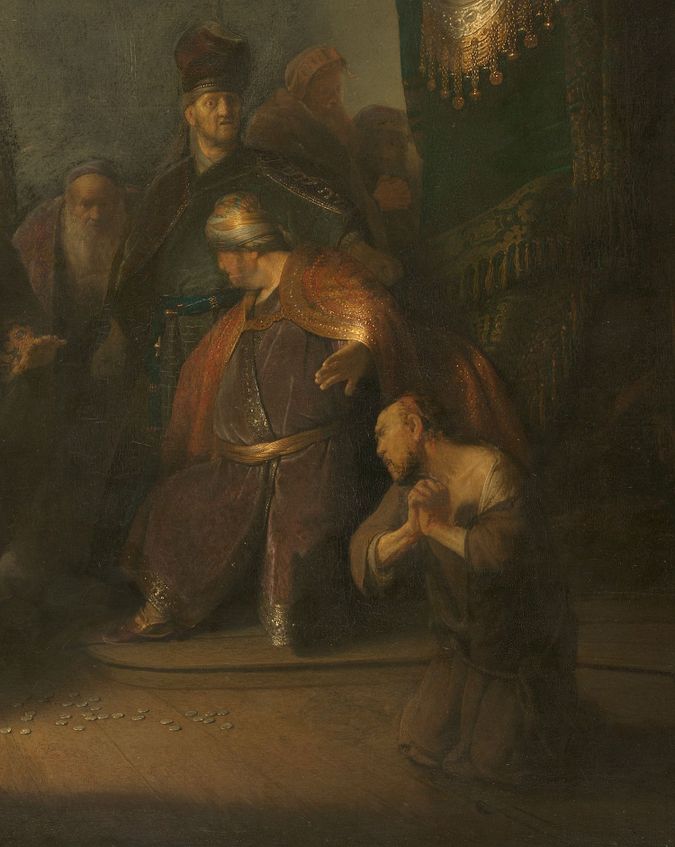 A few years earlier, the Flemish artist Simon Bening painted a prayer book, which is currently at the J. Paul Getty Museum. Bening shows Judas returning a moneybag to Pharisees seated around a table.

An early 16th-century Netherlandish tapestry, in which the Pharisees bizarrely display Ten Commandment motifs on their hats, may show Judas returning silver coins to the Sanhedrin. And an anonymous, sixth-century Byzantine manuscript depicted Judas, in a flowing white robe, dropping the silver in front of a throne, in the Jewish temple upon which two Pharisees sit. The rabbis hold up their hands in refusal.

Judas still tries to return the blood money in a manuscript illumination by the 14th-century English monk William of Nottingham. The initial deal, in which Judas accepts the 30 silver pieces from the Pharisees, has a longer standing aesthetic tradition. At San Marco in Florence, Italy, Fra Angelico’s workshop depicted that scene, as did a mid-13th century polychrome, stone work on the Cathedral of St. Peter and St. Paul in Naumburg, Germany, and an early 14th-century fresco by Giotto at the Scrovegni Chapel in Padua, Italy. In the latter, a black devil holds Judas by the shoulder, a motif that also surfaces in a 14th-century Franciscan French missal.

The scene’s infrequent depiction makes the exhibit “Rembrandt’s First Masterpiece” at the Morgan Library & Museum all the more interesting, and provocative. At age 23 when he painted the work in 1629, the Leiden-born Rembrandt hadn’t yet moved to Amsterdam and didn’t yet live in the Jewish section of the city.

When Lloyd DeWitt, chief curator at the Chrysler Museum of Art, in Norfolk, Virginia, and edited the exhibition catalog “Rembrandt and the Face of Jesus,” saw the Morgan exhibit, he was impressed by Rembrandt’s fascination with the temple. “I’ve often thought it was just part of his early production, very much in keeping with the tone of the early Ecce Homo with its use of stereotypes, but having seen it again, I’m not sure it isn’t more sympathetic,” he said. 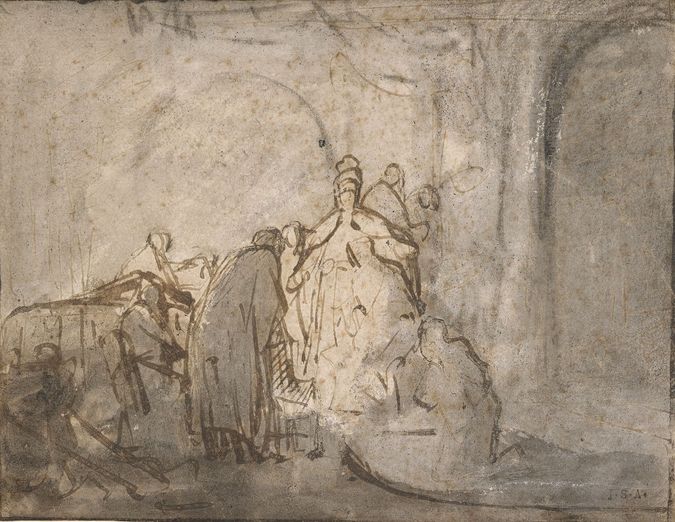 Rembrandt’s 1634 “Ecce Homo” depicts Jewish viewers mocking Jesus with stereotypically anti-Semitic features, while a later Rembrandt depiction of the same scene in 1655 shows a more sympathetic audience. The Judas painting, to DeWitt, has none of that negativity. “I think the reason it feels less negative than the ‘Ecce Homo’ print is the kind of exoticizing distance of the dark temple space, and the dark, emotionless, mysterious faces who are meant to be a foil or contrast to Judas,” he said. “In the ‘Ecce Homo,’ Rembrandt fits himself into a long tradition of exaggerated, unfortunate imagery. ‘Judas’ is much more original.”

Steven Nadler, a University of Wisconsin—Madison professor who has published extensively on Rembrandt, says there’s no reason to assume Rembrandt modeled Jews for his Judas, or that he had contacts in the Dutch Jewish community in 1629, despite his likely apprenticeship to Pieter Lastman in Amsterdam in 1624.

“It’s possible he could have come into contact with members of the city’s Jewish communities then, but also possible, and maybe more likely, that he did not,” Nadler said. “We should not romanticize or exaggerate Rembrandt’s attitude toward Jews or Judaism,” he added.

To Nadler, it’s always possible to read anti-Semitism into how an artist poses Jewish figures. “We have no idea whether Rembrandt was aware at this point of anti-Semitic interpretations of the pieces of silver episode,” he said. “It’s possible he was, at least if he was familiar with any preaching going on in the Dutch Reformed Church.” 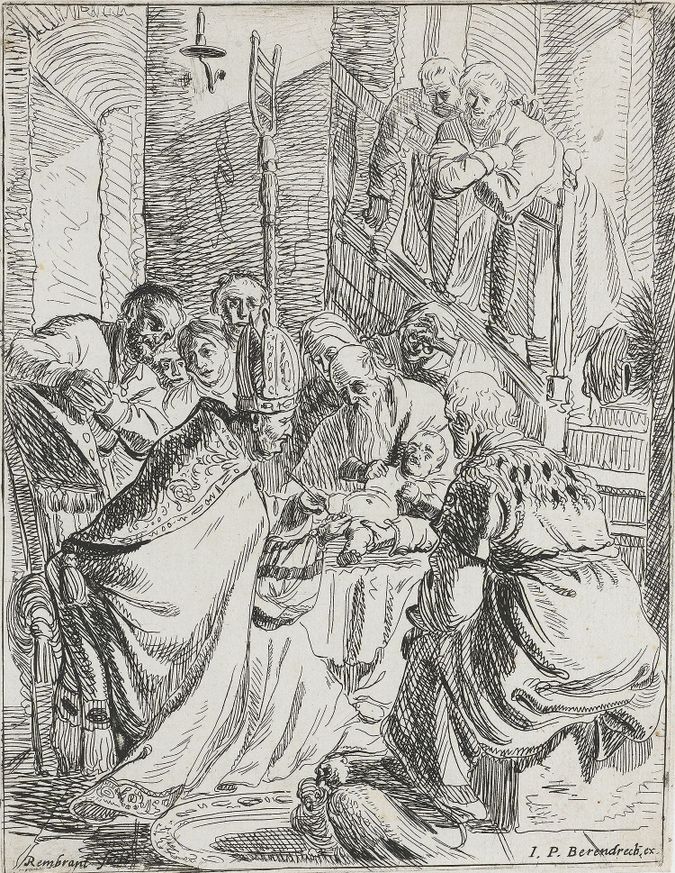 “The Circumcision” (1625) Image by National Gallery of London

Larry Silver, author of “Rembrandt’s Faith: Church and Temple in the Dutch Golden Age,” notes that Rembrandt thought highly enough of the Judas painting to issue a print of that figure in isolation. “It is also closely related to figures of Saint Peter in remorse, a popular subject at the same moment with wringing hands,” he said.

A wall label at the exhibit refers to the Pharisees in the Judas painting as “haughty,” which doesn’t bother Silver, because the New Testament portrays them as arrogant. “Reading expressions is often a fool’s errand, since no two people will characterize them the same way,” he said. “But there is no doubt. When Rembrandt shows Jewish figures in his New Testament scenes, they are hostile establishment figures: haughty, wealthy and commanding.”

The “haughty” description relates to both the context of the biblical episode and Rembrandt’s composition, according to Ilona van Tuinen, assistant curator of drawings and prints at the Morgan. “At the time Rembrandt painted this, there were hardly any other examples, if none at all,” she said. “The depiction of Judas’s suicide featured in medieval art, but this encounter and display of remorse had not been depicted up until then.”

Rembrandt, she added, was interested in portraying the “complexity and ambiguity of the episode, from the point of view of the spectator, of Judas, and of the priests.

“I am not sure I would call any of the figures in this painting stereotypical, and I think Rembrandt leaves a lot of room for interpretation.”she said.

Menachem Wecker writes frequently about art for the Forward.