Can Israeli Startup Use Gene Therapy To Cure Cancer? 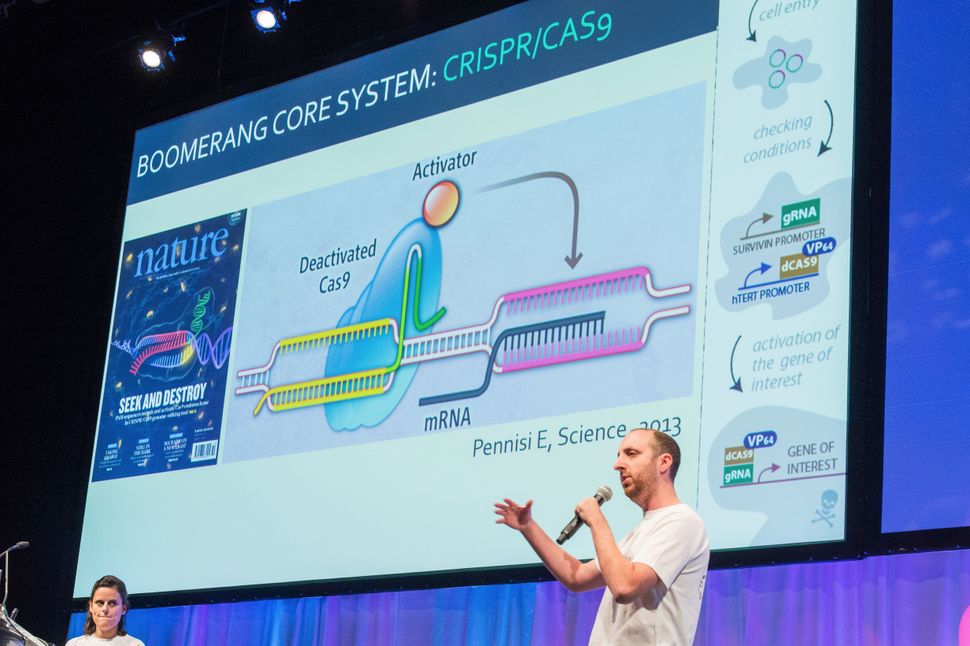 In 1944 Harvard installed Mark I, a computerized calculator, to aid physics professor John von Neumann’s work on the Manhattan Project. The one-of-a-kind machine took up most of a room. Today, for $500, you can keep an exponentially more rapid and versatile smartphone in your pocket.

Imagine what similarly rapid technological growth might look like in health care. Diseases such as cancer, for which today’s treatment is too costly or too fallible to be broadly accessible and successful, could, in 70 years, be addressed in simple, easily personalized ways.

The idea that the principles of engineering can be applied to facilitate rapid technological innovation in a variety of fields is at the core of the field of synthetic biology. Helping new generations reach the forefront of that area is Boston’s iGEM Competition (iGEM stands for Internationally Genetically Engineered Machine). Every summer, iGEM brings an array of high school, college and graduate students from around the world together to present ideas for if and how “simple biological systems [could] be built from standard interchangeable parts,” said iGEM Vice President Meagan Lizarazo.

When it comes to cancer, an Israeli startup called Boomerang has technology in preclinical trials that it thinks might help answer that question. Their idea? Use gene therapy to, in the words of Dr. Emil Ruvinov, “differentiate between cancer and healthy cells, and then destroy specifically cancer cells only, and leave those healthy cells alive and kicking.”

Boomerang began as the 2015 iGEM team for Ben-Gurion University of the Negev, with Ruvinov and his colleague Dr. Efrat Forti, postdoctoral researchers in the lab of Dr. Smadar Cohen, as the team’s supervisors. “It’s more or less a tradition for the Ben-Gurion University to build a team for the competition,” said Ruvinov, speaking with the Forward over Skype. The eight students they assembled came from fields as disparate as biotechnology engineering, economics, and political science; as Lizarazo explained, for iGEM, “synthetic biology is not just the biology, it’s not just the engineering, it’s the human practices, the social, ethical, legal implications of the work that we’re doing in this field.” 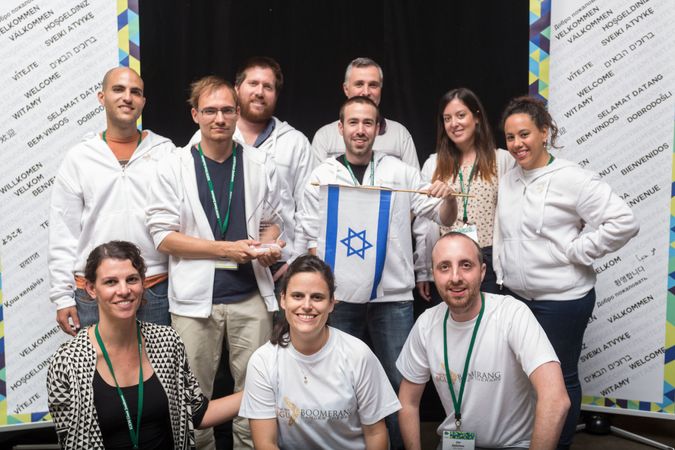 The group initially pursued an idea put forth by Ori Zelichov, then a medical student. “As a doctor, I always saw during the oncology operations that the doctor doesn’t really know where to cut, exactly where is the tumor’s border,” Zelichov said over Skype. “I thought about a way to color cancer cells to allow the surgeon to visualize the tumor. Once the team started working, they realized the technology they were considering had even greater potential. “Once we can so specifically differentiate between cancer and normal cells, why won’t we kill the cell instead of just coloring them?” Zelichov asked.

To do that they used a technology called CRISPR/Cas9 that, Ruvinov explained, “is based on [a] mechanism identified in bacteria” that is “[used] to fight the invasion of various viruses into the bacteria. In mammalian cells,” he explained, “the idea is the following: You can target a specific genetic sequence in the DNA of [a] cell by using that system.”

The CRISPR/Cas9 consists of two components, Ruvinov said: an enzyme called Cas9 that binds DNA, then make a double strand break in it. “You can kill [the] cancer cells by knocking out specific genes,” he said, “or you can…actually produce some protein, which will work as a drug and kill some cancer cells.”

In order to do that precisely, Ruvinov said the system needs to employ a second element. “The enzyme by itself cannot identify the precise location,” he said. “[It] needs the guide RNA (gRNA), [which] has complementarity to a specific sequence in the DNA. The Cas9 only with the help of gRNA combines to that specific sequence in the DNA, and then it can perform its double strand break.”

Those two components proved an ideal tool for the Ben-Gurion team created. “When we tried to differentiate the cancer cells from healthy cells, we looked [to see] what are the genetic components in our cells,” Ruvinov said. “We end[ed] up with something called promoters, which are DNA sequences located before the gene sequence in our DNA. They are responsible for the expression of those genes.” The team identified two promoters that display high activity in cancer cells and almost none in healthy cells, then created a genetic construct in which each was attached to an element of the CRISPR/Cas9 system. “We had one cancer-specific promoter before the Cas9 gene, and the other one before the gRNA gene,” Ruvinov explained. The system, they hypothesized, would only activate in cells that contained both promoters, leaving the healthy cells intact.

To test that hypothesis, the group transferred the CRISPR/Cas9 genes, cancer-specific promoters and a green fluorescent protein attached, to cultures of healthy human cells and human cancer cells. When absorbed by a cell, the protein emits green light visible through a fluorescent microscope.

“After waiting one or two days, we started to see a signal of that protein,” Ruvinov said, “[we saw] the signal only in cancer cells, and no signal in healthy cells.” The signal indicated that the entire genetic construct had been activated in the cancer cells; its absence in the healthy cells meant they’d been left untouched. It was the proof of concept needed to support the technology’s potential as a method of eliminating cancer cells and leaving healthy cells intact. It was also a finding that earned the team first place in the 2015 iGEM Competition’s Health and Medicine Category and overall runner-up in the “Overgraduate” category.

Since the competition, Zelichov has taken charge of the project. Working with Ruvinov and Forti, he’s received a provisional patent on the technology. He’s optimistic that it has a future, but it will take a lot of time and trial to prove the technology is effective and safe for humans, and even longer to make it market ready. Ruvinov estimates the whole process will take 10 to 15 years, and might be made lengthier by anxiety over the safety of gene therapy. (“There was, 20 years back, some huge boom about gene therapy,” he said, “but it encountered several negative cases, several deaths.”) More in vitro trials are needed first. “Our previous experiments tested only the specificity of our system… we have not [yet] tested the efficiency,” Zelichov explained. If those steps are successful, then the team can proceed to animal trials and, finally, clinical trials.

The project currently lacks funding to continue with in vitro trials. Zelichov hopes to remedy that this month, when he’ll present Boomerang at Beijing’s 2016 Shengjing Global Innovation Awards. Boomerang was one of three start-ups chosen from a field of 140 to represent Israel in the competition, which awards $1.5 million in prize money.

“I feel the things that happened today in biology are very similar to what happened in computer science 20 years ago before the Internet revolution,” Zelichov said. “We have tools that allow us to control genes as [if we’re] programming the software. Genes are basically a code, and we know to manipulate it.”

Can Israeli Startup Use Gene Therapy To Cure Cancer?