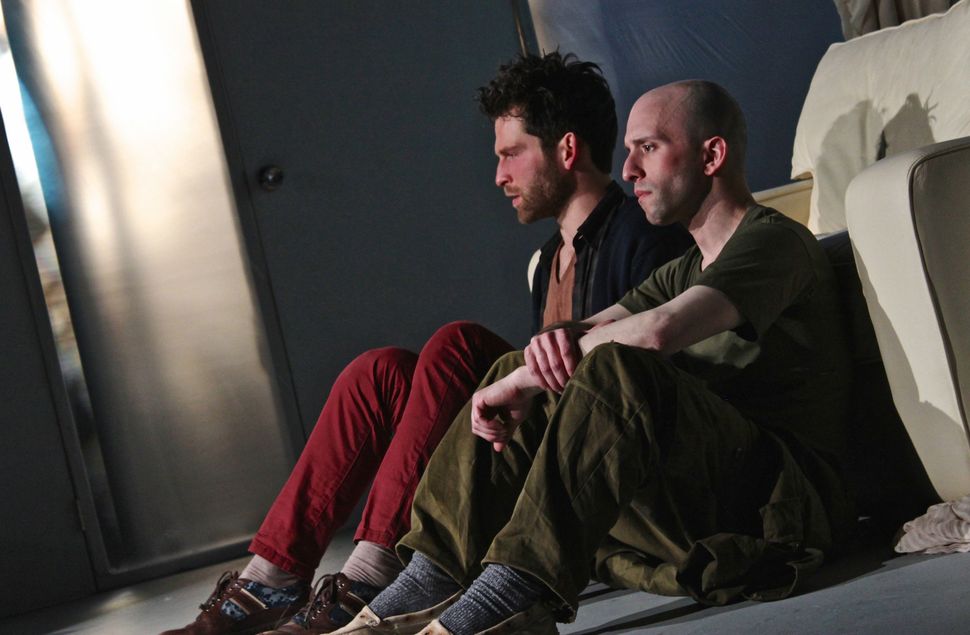 The day after I saw Cassie M. Seinuk’s “From the Deep,” a play about the mental struggles of captivity, at NYC Fringe, I ran into Charles Linshaw, one of two actors in the play, waiting in line to see another Fringe production. Even though I knew that Linshaw, who plays the Israeli Ilan in “From the Deep,” was American, I was surprised to hear him speaking without an Israeli accent. “From the Deep” had stayed with me, in the fashion of a powerful dream, and I still wasn’t ready for the fourth wall to be broken.

The concept of “From the Deep” is half simple, half confounding. The play begins with Ilan playing ping pong with Andrew, played by Jeff Marcus, in a sparse white room. Ilan, in fatigues, speaks with an Israeli accent; Andrew sports the stereotypical uniform of the northeastern American student: red pants, plaid button-down, navy sweatshirt. It becomes quickly clear that each of them is being held captive somewhere other than the room. Ilan is a prisoner of war modeled on Gilad Shalit, the Israeli soldier held captive by Hamas for five years; Andrew has been kidnapped, but until late in the second act we don’t have a sense of why, or by whom.

The room, and its rules, gain a sort of hazy clarity over the course of Ilan and Andrew’s time there. It’s a mental retreat for people in captivity; while their bodies stay captive, their minds get sent to the room to wait out the experience. (Yes, it’s reminiscent of Jean Paul Satre’s “No Exit,” although Ilan and Andrew exist in a markedly different kind of hell.) Only two people can occupy the room at a time; each is assigned a door with a clock over it. The only other exit is clockless, the flaps that cover the door adorned with startlingly grim black handprints. (Before Andrew arrived, Ilan explains, he was paired with a girl who was dragged out through that door, never to return; it’s a fate, he makes clear, that should be avoided.) When something that needs each man’s attention happens in the world outside the room, the clock above his door flashes and sounds an alarm. Neither man can exit the room except when he’s called in this way.

Seinuk, a Cuban Jew who grew up modern Orthodox in North Woodmere, wrote the play for her graduate thesis at Lesley University, where she earned a Masters of Fine Arts in Playwriting in 2013. Seinuk’s father was a cousin of Ehud Goldwasser, one of two Israeli soldiers kidnapped by Hezbollah in July of 2008 whose bodies were returned to the country as part of a prisoner exchange. Goldwasser’s widow became an advocate for Shalit during his imprisonment, and would stay with Seinuk’s family when she came to the United States.

“I felt a personal connection to his story,” Seinuk said, speaking with the Forward over the phone. She started to work on her thesis just as the year anniversary of Shalit’s release approached, and the anniversary provided inspiration.

“In a couple of [interviews] they said what did you do for five years, and he said he played games, he tried to keep his mind active,” Seinuk said. “I just thought wow, that’s a play.”

“Within a week or two there were all of these stories popping up all over the country of college-age male students going missing,” she said. “I thought to myself, in what world can someone like Gilad and this message of his help someone else through their own captivity?”

It took her some time to narrow the play down to just two characters. Her first draft, she said, had a much larger cast occupying a room more directly tied to the real world; it included a TV on which the captives could watch the news. That didn’t last long.

The person who wants to stay is Andrew; Ilan has made it his mission to get Andrew to leave. He believes the only way out of captivity, and out of the room, is to go when called, even if it means experiencing violence. After five years in captivity, Ilan has the practice of prisonership down to an art. He keeps his mind busy with games, he goes when called, and he speaks about his life in the present tense, not the past.

Andrew, who for initially unknown reasons refuses to return to his body when summoned, is reluctant to adopt Ilan’s principles. One of the play’s driving mysteries is what is happening to Andrew, and why his ordeal has so quickly made him lose the will to survive it. The other, of course, is what will happen to each man.

The play is deeply emotional, occasionally humorous, and, most admirably, restrained. It was the third of four Fringe productions I’ve seen so far, and where each of the others has in some way reached for meaning through exaggeration – lots of overacting and overwriting – Seinuk’s writing has been carefully whittled, and Linshaw and Marcus’s performances are easy, nuanced, and natural. Both actors have been playing their parts in “From the Deep” since the spring of 2013, when Seinuk cast them in the play’s first reading. Their long association with their characters pays off; playing men thrust into extreme circumstances, they react as humans striving to remain human, rather than resorting to extremes of performance to convey emotional and physical strain.

Directed by Lindsay Eagle, with a set design by Megan Kinneen, the small world of the room the men occupy takes on an unexpectedly meaningful character, slowly revealing the ways in which it has been marked and changed by its previous occupants. It’s a clever, thoughtful choice. While Seinuk classifies “From the Deep,” as magical realism, to be successful, the play’s environment must be compelling, and its creators have taken pains to make it feel simultaneously impossible and real, sinister and comforting.

Ilan and Andrew are both suffering through extraordinarily traumatic situations. It would be unbelievable for their stories to be resolved happily or neatly, and thankfully, Seinuk doesn’t try to give them falsely promising ends. Yet the play does end with a quiet, melancholy infusion of grace. In the space of the theater, the audience becomes part of the characters’ trap, futile witnesses to an exertion of the spirit that most will never experience. It leaves us feeling guilty for a world so cruel, yes, but just a little more tenderly human, too.