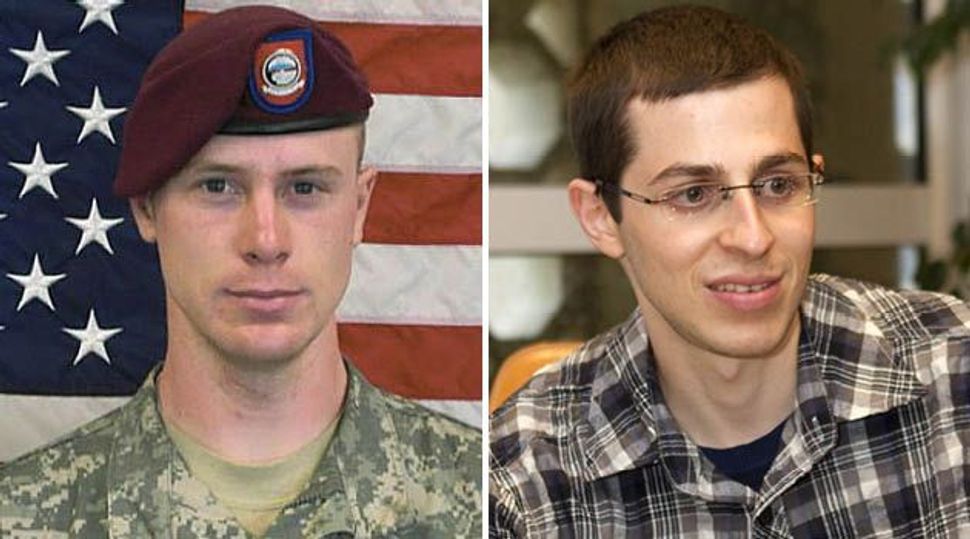 The news of Sergeant Bowe Bergdahl’s release caught Noam Shalit, father of Israel’s most famous prisoner of war, while he was visiting America.

Listening to the media reports about the prisoner swap that freed Bergdahl from years of captivity by Afghanistan’s Taliban, Shalit was struck by the similarities between the case of the soldier from Idaho and that of his son, Gilad Shalit.

“The whole situation of a POW in the hands of a terror organization was just the same,” the elder Shalit told the Forward. Some parallels are obvious: Both were held for five years by designated terror groups, and in both cases, their governments ended up paying hefty prices in prisoner swap deals that sparked fierce national debate.

In Gilad Shalit’s case, the price was 1,027 security prisoners, including 280 deemed to have been directly involved in killing Israelis. To liberate Bergdahl, the United States freed five senior commanders of the Afghan Taliban (though the government of Qatar has promised to keep them under wraps there for one year).

But despite the fact that both soldiers also faced criticism of their conduct after they were freed, one striking difference stands out: the Israeli public’s support for such deals, no matter how lopsided — and no matter what the circumstances of the Israeli’s capture.

In the days following the massive release of security prisoners that brought Gilad Shalit to freedom in 2011, a poll by the Israel Democracy Institute found that almost 78% of those surveyed supported the deal, to varying degrees.

That kind of support is a given in Israel, almost regardless of the character of the prisoner involved. Witness the case of Elchanan Tannenbaum, an Israeli businessman and colonel in the army reserve whom Hezbollah, a government-designated terrorist group, drew to Dubai on the pretext of concluding a huge illegal drug deal. Hezbollah abducted him from there to Lebanon. In January 2004, more than three years after his capture, Israel obtained his freedom (and the remains of two dead soldiers) by releasing 435 security prisoners, including two senior Hezbollah officials.

The circumstances of Tannenbaum’s capture led many in Israel to oppose the swap. The government cabinet approved the deal by a margin of just one vote. But an IDI poll taken shortly afterward showed that 63% of the public supported the exchange. Only 29% opposed it.

Influenced by the reported circumstances surrounding Bergdahl’s capture, American public reaction to his release could not be more different. A photo of Bergdahl on the cover of Time magazine blared the message in bold letters under his image: “Was He Worth It?”

A plurality of Americans apparently think not. A June 10 poll conducted by USA Today and the Pew Research Center found that 43% of those surveyed said that the prisoner exchange was the wrong thing to do, compared with 34% who said it was the right decision. Twenty-three percent were unsure.

Noam Shalit was not surprised when he heard attacks on Bergdahl from TV pundits, politicians and even from his former unit comrades. But this, he said, was no reason to second-guess the swap.

The incoming flak began quickly after Bergdahl’s release, announced by President Obama on May 31 as the soldier’s parents flanked him at the White House. A tirade of criticism, much of it from Republicans, focused heavily on the agreement to release the five senior Taliban officials, who have been held since the early years of the Afghanistan war in the Guantanamo Bay military detention facility in Cuba.

Some hit out at Bergdahl himself. Critics questioned whether he had left his base with an intention to desert. Some fellow soldiers asserted that lives had been lost in the subsequent search for him (and were in turn disputed on this point). Others speculated regarding his alleged sympathy for the Taliban.

Bob Bergdahl, the soldier’s father, faced harsh criticism for statements he had made during the family’s campaign to gain their son’s release. Some of those statements seemed to show understanding for the Taliban and support of its demand for the release of the Taliban prisoners in Guantanamo. Threats against the Bergdahl family led the FBI to announce that it was investigating.

Shalit faced less of an ordeal, although once his homecoming celebrations ended, Israeli media began to dig into military debriefings that indicated he could have avoided captivity had he responded as expected to the Hamas attack on his unit.

Gershon Baskin, a veteran peace activist who conducted back-channel negotiations that helped bring about Shalit’s release, said these claims are par for the course in POW swap deals. “It’s very common in Israeli cases for the media to attempt to discredit the prisoner,” Baskin said. Seeing the same phenomenon in the United States was unsurprising, he added. “[It’s] a voice of anger against the release of some very nasty people,” said Baskin.

Still, the exponential difference in the respective numbers involved in the swaps is striking. In September 1982, Palestinian fighters took eight soldiers from the Israeli army’s Nahal Infantry Brigade captive during the first Lebanon war. They were released more than a year later, in return for 4,700 Lebanese detainees. Here, too, questions were raised: How did eight trained soldiers fall into the hands of two enemy fighters? Why didn’t they fight back? Should Israel pay such a heavy price for their release?

In the end, history has shown that Israel consistently fails to live up to its mythical portrayal overseas as a nation tough on terror and reluctant to compromise. In every case, it was the soft heart that prevailed over the strong rhetoric.

All POWs were deemed worthy of the high price required to achieve their release.

That may soon change. Just as Bergdahl was taking his first steps in freedom, Israeli moves were afoot to prevent future prisoner deals. On June 8, the Israeli Cabinet approved legislation intended to prevent Palestinian prisoners from being freed in future deals.

The bill, in its introduction, decries the “absurd situation by which terrorists who commit murder as part of their fight against the State of Israel get released well before they serve out their term.”

If the bill passes its Knesset readings, which theoretically will happen easily now that it has government backing, courts will have the right to declare certain prisoners ineligible for the presidential pardon needed for release.

In practice, many Israelis don’t think the law will prevent the next large-scale prisoner swap. The planned legislation, said Shlomo Mizrahi, a public policy professor at Ben-Gurion University of the Negev, “will simply not work if there is a way to save lives by releasing prisoners.”

Shalit understands this point better than others. He and his family conducted a massive public opinion campaign while his son was in captivity, in order to apply pressure on the government to enter a deal with Hamas.

This could be the key difference between the prisoner swap experience in Israel and in the United States.

Throughout the years, Israeli families and friends of the POWs have taken to every stage to call for the release of their loved ones and have advocated actively for the approval of prisoner swaps; Bergdahl enjoyed only the quiet support of his family and neighbors in Hailey, Idaho. His case rarely received national attention.

Baskin thinks that American families of captives can learn from the Israeli experience by taking a higher profile and being more skeptical of the claim from the authorities that lying low is in their best interests.

“The system, the establishment, discourages families from going public and making a lot of noise, saying this will raise the price,” he said. “From my experience this is not the case.”

This lesson has already been learned by the family of Alan Gross, an American Jewish contractor to the State Department’s Agency of International Development who is serving a 15-year sentence in Cuba for smuggling Internet communication devices for the island’s Jewish community. The government initially was reluctant to even acknowledge that Gross was in Cuba on its behalf. After initially shying away from the spotlight, the Gross family adopted a more vocal approach and has called publicly on President Obama to cut a deal with the Castro regime.

A State Department spokeswoman last week insisted there would be no change in the policy of refusing to consider freeing jailed Cuban spies in exchange for Gross’s freedom.

Publicity could also be the way forward for the family of another Jewish captive. Elaine Weinstein got the news of Bergdahl’s release when driving home from a bar mitzvah. She had hoped the announcement would include her husband, Warren Weinstein, a contractor involved in development projects who was kidnapped in Pakistan in 2011.

“I thought that if they were going to exchange prisoners, and take that step, that my husband would have been included,” Weinstein said. “Every American deserves the same treatment and needs to be brought home.”