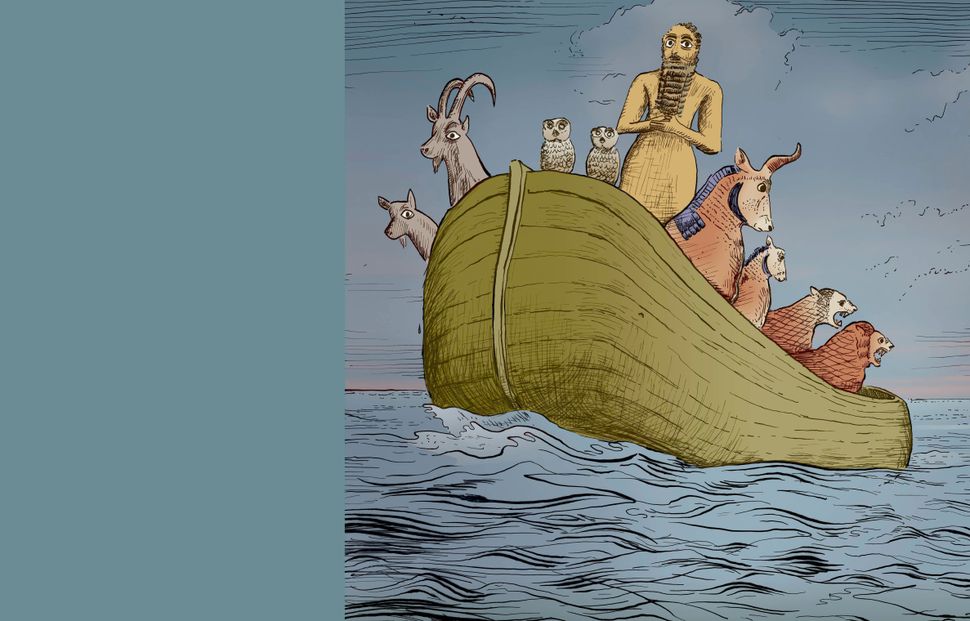 I grew up hearing the Code of Hammurabi read out loud, in Akkadian, at the dining-room table. I did not know that my graduate-student mother was one of Akkadian’s few regular readers. The language of the ancient Akkad region, or modern-day Iraq, is considered a “dead language,” just like Ugaritic and Phoenician. All these dead tongues, however, fed into the Hebrew Bible, the most read book in history, and so they have a form of eternal life.

And so the language my mother read sounded familiar. Abum is like abba, the Hebrew word for father; imum like ima, or mother, and kalbum like kelev, or dog. For years I told myself that Akkadian, its strict legal code, and its dramatic descriptions of what would be done to losers in battle (hint: towering piles of body parts displayed for all to see) was my mother’s terrain, not mine. But the truth is that it is nearly impossible to avoid Akkadian’s influence on all of us.

The language of triangles and lines pressed into clay tablets has a stealth presence in Jewish culture and Western culture. Many of us say a word of Akkadian daily without realizing it; some of us even have Akkadian names. Leah comes from litum, the Akkadian word for cow. Laban, an idol-worshipping shepherd whose other daughter was Rachel, which means ewe, clearly named both his daughters after prized animals. But for centuries, Akkadian itself has been a prize, ensnaring the wealthy and the socially prominent, along with generations of devoted scholars. 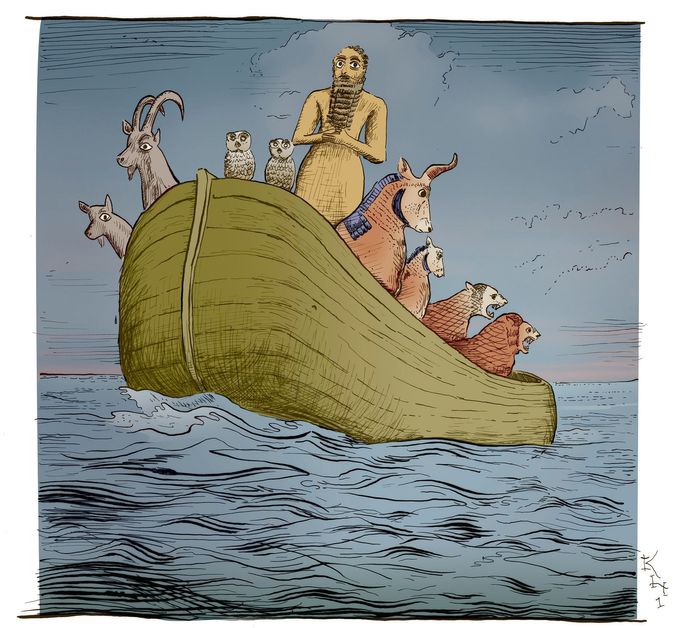 Pierpont Morgan, the banker and financier, is a prime example. As a young man he became fascinated by antiquity, and helped fund the excavation of the biblical city of Nineveh. Luckily, these expensive acquisitions are available for public view, and so I trekked to The Morgan Library & Museum, in New York to see some tablets.

The lobby was full of patrons hoping to snag a table at the museum’s restaurant. Two visitors from Japan were gaping at the hand-inscribed Dylan Thomas volume on display, disappointed that the security guard did not allow photos; a large group was clamoring to see Hemingway’s love letters, from a special exhibit that was about to end, leaving me a surprisingly clear path to the antiquities. I rushed to take a good look before someone else — another dead-language fanatic — blocked my view.

Today, the unearthed treasures Morgan’s millions preserved — an agate piece, the size of a large ring, with an Akkadian inscription, along with several fragments of tablets — are displayed in the longtime office of Morgan’s librarian, Belle da Costa Greene (1879–1950), though “office” seems an odd word for such a lavish space; even the wooden door leading to “the office” is a work of art. I tried not to think I am becoming my mother as I ignored the office’s ornate fireplace and strained to look at the three priceless Akkadian tablet fragments, all featuring tiny intricate writing on peach-colored clay, and all at least 3,500 years old. 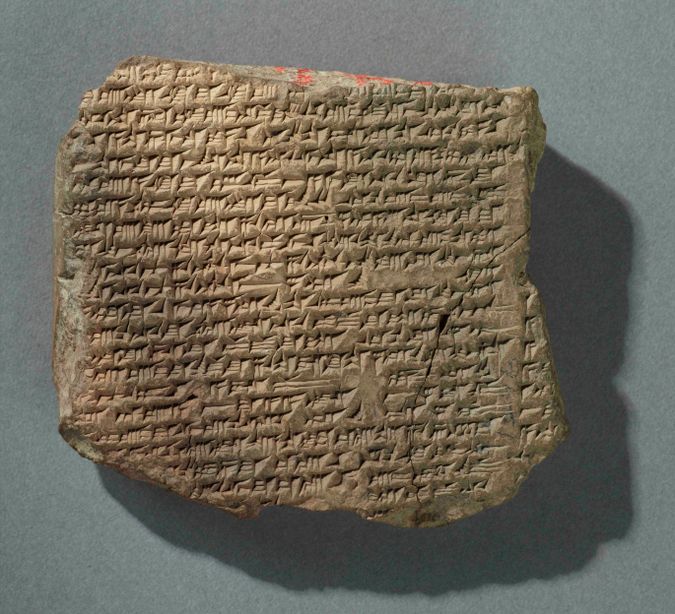 Akkadian Tablet: A fragment of the Epic of Adapa Image by Courtesy of the Morgan Library

Staring at Morgan’s fragment chronicling “the flood” — or the Akkadian version of the familiar Noah story, dating from 1646 to 1626 BCE, I thought of how Akkadian invariably reminds me that the Bible is not all Hebrew and that non-Jewish people and ideas have always shaped Judaism. The epic begins with the creation of man, and soon states that “great indeed was the drudgery of the God.” Disappointed, the deities decided to destroy all of mankind. And so:

The darkness was total, there was no sun.

This continued, we are told, for seven days and seven nights. This was the kind of drama I remember from my mother’s midnight reading sessions. It was always violent, exciting, over the top. But now I find it strangely soothing; it’s a reminder that the story of Noah and God’s unforgettable regret over creating humanity is actually a common ancient narrative, something the neighbors used, too, to explain the world.

Akkadian slips into our day-to-day world, too. When I found myself thinking about gender in Hebrew, I noticed that there were ish and isha, man and woman, which clearly seemed to be related to each other, and then there were also zachar, or male, and nekaiva, or female — words that had no commonality whatsoever.

The Even-Shoshan Dictionary hinted that the word zachar had Akkadian roots, and I wanted to know more. I knew that Chicago, where I now live, is home to the famous CAD — the Chicago Assyrian Dictionary. The CAD catalogs Akkadian and its dialects, and it is modeled on the Oxford English Dictionary. My mother has been talking about the CAD for years. As a girl, I often thought that perhaps if my parents had fewer children they could afford more dictionary volumes.

To my surprise, the famous dictionary has a phone number. I dialed, and someone actually answered.

I cleared my throat, and asked if the dictionary was open to the public.

“Sure,” Ed said hesitantly. “Though you do know we now have PDFs online.”

But I wanted to touch what my mother dreamed of. I drove to Hyde Park, the home of The University of Chicago, and pulled up to the Oriental Institute. The day I visited, there were prominent signs alerting visitors to the looting of antiquities in Iraq, and asking them to protest to their political representatives. The world, I thought, was still a violent place, a danger to humans and tablets. Several graduate students were hard at work, and two barely looked up. The third, Ed, who soon told me that he grew up Mormon and served in the military, graciously offered to give me a tour.

Ed explained that the dictionary project has been underway since 1921. He showed me thousands of handwritten index cards, kept in file cabinets; for 90 years, scholars had been hard at work, and the university was now digitizing their handiwork. He helped me with my word in question — zachar, which indeed is derived from the Akkadian word zikarum. Of course, it had its own index card, as did several other similar-sounding words. I was dismayed to confirm that nekaiva, the word for female, comes from the word nekev, or hole. But that’s Hebrew, not Akkadian.

Then Ed asked if I wanted a tour of the building. We visited the Oriental Institute’s beautiful library, where an Egyptology graduate student helps with copies; then Ed took me to a closet.

I held my breath as he explained that, for decades, Akkadian scholars mailed copies of their books to the dictionary office so that there would be a record of their labors. In the book-stuffed closet, I spied a book by Von Soden, the Nazi officer who came to save Landsberger, his Akkadian teacher and my mother’s professor’s professor. Von Soden told Landsberger to leave the country — now! — and he put him on a train to safety.

Akkadian has always had its passionate defenders, a surprising community that spans time. For those who can’t make it to New York or Chicago, there is a new, cheaper, at-home option. Not long ago, I was charmed to receive a link to a recipe for “cuneiform cookies.”

Of course I clicked. The recipe is brilliant, and it levels the playing field.

You don’t need to be Morgan wealthy. With some flour and butter, and a little patience, you can get a look at the ancient language of Akkad, and get a taste, too.

Aviya Kushner is the author of “The Grammar of God: A Journey Into the Words and Worlds of the Bible” She writes about the world of words for the Forward. Twitter @aviyakushner