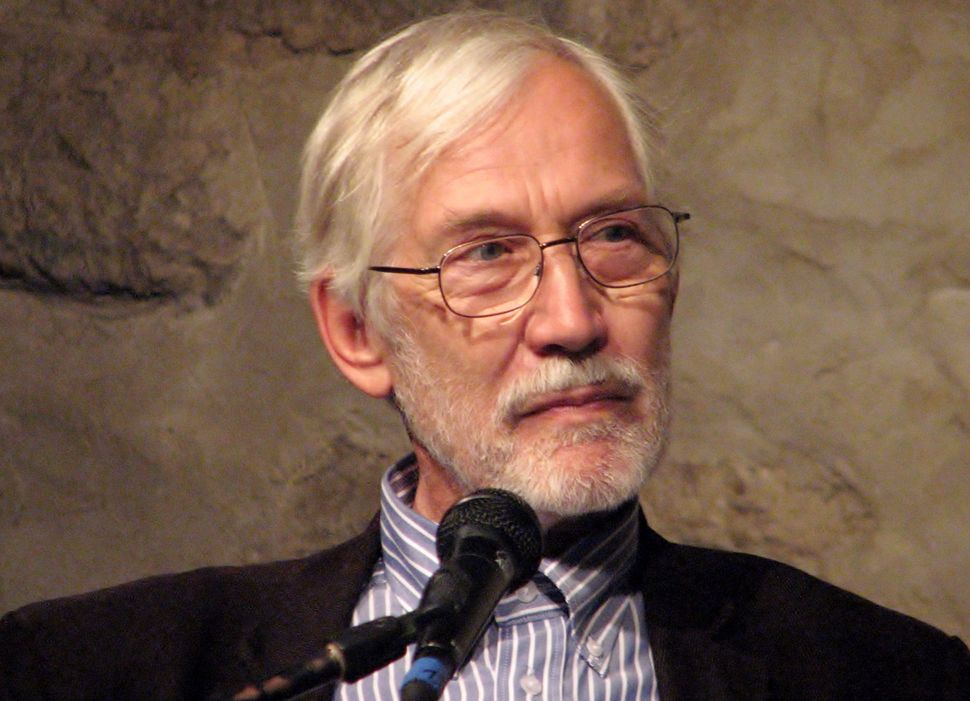 Some book lovers see the annual circus around the Nobel Prize in literature as mostly Swedish political meshugas, often not primarily about quality of writing. Others retain optimism about the award’s potential for spreading news about worthy honorees such as Imre Kertész (2002); Joseph Brodsky (1987); Elias Canetti (1981), and Isaac Bashevis Singer (1978). The posterity of Saul Bellow, honored in 1976, would doubtless be ensured even without the Nobel Prize, but more neglected Jewish writers may benefit from the unsurpassed hype.

Ladbrokes, the venerable United Kingdom betting parlor, has tipped the Japanese novelist Haruki Murakami and Kenyan author Ngũgĩ wa Thiong’o as favorites this year, with Philip Roth, a perpetual also-ran, not far behind. Yet past snarky comments made by Roth about the Nobel Committee for overlooking him may not work in his favor. As he has been for many years, Amos Oz is a middle-ranking prospect, close to the Italian writer Claudio Magris, who declared to La Stampa that he feels “like an honorary Jew,” because he often dealt with subjects involved in Yiddishkeit— Franz Kafka, Joseph Roth and Carlo Michelstaedter — and because he had personal contacts with past Jewish Nobel laureates such as Canetti and Singer.

After these possibilities, there is the category of long shots, led by the poet and musician Robert Allen Zimmerman, aka Bob Dylan. Daniel Karlin, Dylan maven and professor of English literature at the U.K.’s University of Bristol, told the Forward, “I have less faith than I did when I was younger that the Nobel Committee would have the gumption to [award Dylan the prize]. The Nobel Prize would ‘add’ nothing to Dylan; Dylan’s name would add luster to the prize.” If the unlikely occurred and he received the honor? “[Dylan] would accept it,” Karlin suggested, “and would make some odd, unpredictable, possibly offensive statement about it. I like to think that his acceptance speech would consist of a performance of ‘Long and Wasted Years’ from ‘Tempest.’”

Yet the eminent aficionado Christopher Ricks, literary critic and author of “Dylan’s Visions of Sin,” is not holding his breath. Dylan’s “art is that of tripled media, compounded: voice, music, words,” Ricks cautioned, adding, “Literature is probably best thought of — most of the time — as the art of a single medium, language… And the prize for literature may be best left to literature, I think, not to arts that have words as one among several media… A price is paid for these crossings over, and the price is probably not worth paying when Dylan’s name and fame — and achievement — are such as to make his art stand in need of no such recognition.”

Ranked evenly as a long shot with Dylan this year is the 75-year-old Estonian poet of Polish Jewish ancestry Jaan Kaplinski, who for many reasons would be an appropriate winner. Soviet troops arrested His Warsaw-born father, Jerzy Kaplinski (1901–1945), a philologist and lecturer at Tartu University. The elder Kaplinski a died as the result of starvation and beatings in a USSR labor camp during World War II. Jaan Kaplinski has written online that having Estonian and Polish Jewish roots combines “two fatal identities”:

Contacted by the Forward and asked whether Estonians in general share his feelings, Kaplinski replied:

“Estonians without Jewish ancestry know little about Jewish history and don’t care about it. They have their own historical narrative. This, too, is a story of suffering; the high point is the birth of the independent Estonian Republic, the catastrophe is the Soviet annexation of it in 1940. Here, many Estonians feel their suffering — less human than political — is unjustly forgotten by the world. And the Jewish suffering — less political than human — is too publicized. The Jews, even in their suffering, are somewhat privileged; I think this is more or less the Estonian attitude to Jews.”

Kaplinski’s “Selected Poems” focus on the ongoing legacy of the Holocaust, where the ash from cremated bodies may still be airborne: “Maybe a flake of you fell today on the white white / apple blossom in my grandfather’s garden / and on my grey hair.” As solace, Kaplinski relies on Jewish scholarly traditions as an antidote to nationalism thriving in Eastern Europe today.

“The Jews have proven that it is possible to preserve a tradition, a culture, without a nation state,” Kaplinski said, “something we should always keep in mind here in Estonia. I tried to, but couldn’t, recall the name of the rabbi [Yochanan ben Zakkai] who was smuggled out of besieged Jerusalem, the man who was instrumental in keeping the Pharisaic tradition alive. I admire him more than I admire the defenders of Masada. I have not so much respect for heroic death, perhaps because [Estonians] were brainwashed with tales of Soviet heroism. I love the Jewish humor that is so ingeniously combined with the strict observance of halachic rules. No wonder that the Jews with traditional education or their descendants were so successful in sciences in the 20th century.”

Influenced by Buddhism, Kaplinski is active in the field of animal rights. He has opined: “We all live in Auschwitz. What we human beings are doing with Nature, with other living beings, is not much better than Auschwitz. We exterminate some species and populations, and exploit the others mercilessly… We subject animals to all kinds of tortures; we behave as if only us, the Western variety of the species Homo sapiens, had full human rights.”

Asked whether the treatment of animals should be compared to the Holocaust, Kaplinski admitted: “No, it is not appropriate to use it in this way. But in our nature, in our culture, there are dismal features that, taken the appropriate historic moment, give rise to Auschwitzes. The murders of ISIS [the Islamic State group], Al Qaida and other Islamist fanatics prove that if we don’t change our culture, our attitudes to the Other, there are other Auschwitzes waiting. And the ecocide, destruction of our planets’ great web of life, is, in my view, something really comparable to genocide, to the Holocaust.”

The Nobel Committee is notoriously swayed by political messages; the last Jewish laureate in literature, the captious U.K. playwright Harold Pinter, was possibly chosen in part because he was sure to deliver scorching denunciations of America and its president at the time of the Iraq War. Would the Swedes hand an Estonian the prize as a rebuke to candidate Donald Trump, who has threatened that as president, he would defend Baltic nations from a Russian invasion only after evaluating whether “they fulfill their obligations to us”? Asked about this year’s election, Kaplinski notes:

“It’s an interesting campaign that says a lot about the American people, about its level of intelligence, but also about the political crisis there and in the West in general. If somebody with the manners and rhetoric of Donald Trump is able to compete with a member of old political elite, then something is changing — or even rotten — in the U.S. As to the danger of a Russian invasion here, I think it’s first of all hype, maybe even a hype orchestrated and supported by the military industry for whom Russia as adversary is much more useful than the Islamic extremists. To confront Russia, America and its allies and cronies need a lot of modern military hardware.”

Would Kaplinski even want the publicity, intrusion and overall tsoris attached to winning the award?

“To be sincere,” he declared, “I have an ambivalent attitude to this prize. It would definitely help me to support my big family — the Kaplinski clan — and give to my somewhat dissident voice more authority. But of course, it would also be a nuisance, especially for a person of my age. I remember the answer the late Seamus Heaney gave me when I asked him how he felt himself after having received [it]. He said, ‘You know, it’s a job, it’s a job.’ But I could always escape, fly to a distant island, to live somewhere incommunicado.”