Why This Literary Translator Will Do Yiddish — but Not Haruki Murakami 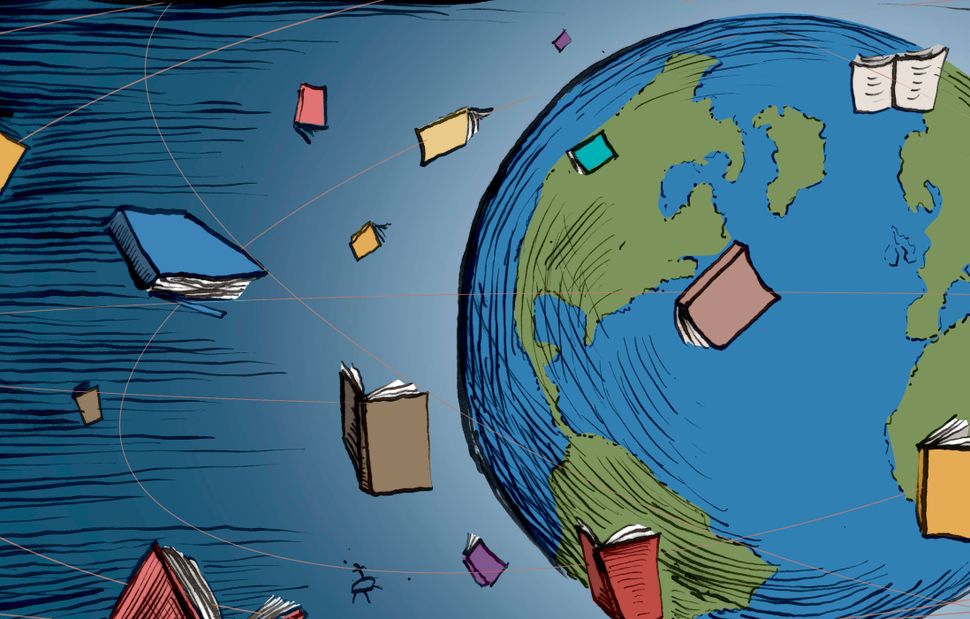 I once heard a woman in cat’s-eye glasses say that she likes to look at a large map on her wall, which has pins affixed to the countries from which she has published literature in translation. But what haunts her, she passionately explained, are the empty spaces on the map — the countries with no pins, where she has not been able to publish their writing in English, usually because no translations were available.

Susan Harris is the longtime editorial director of Words Without Borders, an online magazine devoted to international literature in translation. The magazine has published work from 130 countries and 110 languages and counting. Harris is the woman with the map. An iconic figure in the translation world, Harris is the rarest of breeds: an editor who has devoted her career to editing literary translations. She spent 17 years at Northwestern University Press specializing in translations, and has now spent more than 13 years with Words Without Borders. On a recent night in Iowa City, home of the graduate program in literary translation at The University of Iowa — the oldest such program in the country — 30 young writers and translators crammed around a V-shaped table and an overhead screen in a handsome wood-paneled room to hear Harris discuss (what else?) the art of editing translations.

Words Without Borders was the brainchild of Alane Salierno Mason, a top editor at W.W. Norton & Company who in the late 1990s dreamed up a site that would be aimed at the publishing industry and would provide book editors with excerpts of work from around the world. “In the U.S, so many people do not do language,” Harris said. “People read at most one foreign language, and this of course affects American publishing.”

But by the time the site launched, it morphed into a monthly literary magazine publishing literary translation for general readers, and it soon began publishing anthologies, including one on literature of the Middle East. Edited by Reza Aslan it is widely taught. It also published the now-classic “Ecco Anthology of International Poetry,” edited by Harris and the poet Ilya Kaminsky, and attracted an international audience, sometimes in unexpected places. “We’ve always been popular in Pakistan,” Harris said, though she was unsure why. Other places where the site is popular include the United States, the United Kingdom, France and Germany.

Harris is not interested in promoting the already famous, though she did publish the Italian writer Elena Ferrante in 2005 — before she became a best-seller recently championed by Hillary Clinton. “We will never publish Murakami,” Harris explained. “He doesn’t need us.”

Instead, Words Without Borders recently published a first-ever feature on contemporary Yiddish literature from three continents, the work of young translators. “Our mission is not just to discover writers, but to discover translators,” she told the approving crowd. The site highlights the work of translation with the Translator Relay, where translators pass the baton to other translators, letting each one interview the other. The interview with Peter Constantine, who translated the major Russian Jewish writer Isaac Babel, is a classic. And for writers completely unknown to English-language readers, Words Without Borders can be a career maker. “We are proud that at least 20 writers got book contracts from publishing excerpts on our site,” Harris said.

Harris pulled out a marked-up copy of a translation she published for the group to see on the overhead screen. The original is in Tamil, but to protect the innocent, the writer’s identity is not revealed. The word “clarification” with a query after it was all over the margins, and it soon became evident that clarity is a prime concern when moving work from one culture to another. A student asked about mistakes. “I’m still haunted by a mistake from 1988,” Harris said, and explained that publishing online makes it easier to fix errors quickly.

Some countries have editorial cultures where little or no editing takes place, she explained, so English-language editors must consider that there may be flaws in the original. And certain differences between languages make editing especially tricky. “Some languages and literatures are much looser with tenses,” she explained.

Does Harris ever change a title?”

Translators sometimes change titles,” she said. And sometimes the opposite happens — they refuse to do so. A famous example in the translation world is Milan Kundera’s “The Unbearable Lightness of Being.” Translator Michael Henry Heim, a legend in the field, insisted on the title, which is very close to the Czech, but Kundera thought it wouldn’t go over well with Americans; he wanted “Karenin’s Smile,” one of the chapter titles, instead.

But titles are not the only element that may change as a piece travels around the world. Harris described a recent workshop in England in which she suggested that a character’s name be changed — a first for her. “The character’s name was Hillary,” she said. “And I just felt that at this moment in the zeitgeist, that name had a particular association.” Harris also offered a sense of the importance of developing a worldwide network of writers and translators. When a Tunisian man set himself on fire, igniting what became the Arab Spring, Harris quickly reached out to all the writers and translators she knew throughout the Arab world. When she contacted graphic novelist Magdy ElShafee, who had previously written a book on corruption in Cairo that she had excerpted, and asked if he might draw something for her, he gave her some panels on Tahrir Square. The translation, by Humphrey Davies, read: [Two million people in the square couldn’t get him off the chair. “But by the time we published it, they had,” Harris said. She emphasized that international literature can give readers needed perspective. “We know about so much of the world through a strictly political prism. Without sounding starry-eyed, literature is one of the best ways to understand a culture,” she said. “It’s in everyone’s interest to publish work from as much of the world as possible.”

But that commitment requires translators. As Harris discussed how moved she is by the changing translation community, which has gotten larger and younger in recent years, I had an unexpected flashback to my days as a student in Iowa a decade ago, when graduate translation workshops often had just four or five people. Now, the Master of Fine Arts program in literary translation here has 21 students. It’s mind-boggling to have to jockey for a seat.

Aron Aji, a Turkish translator and the director of The University of Iowa’s translation program, believes in the importance of the translation ecosystem. “We need reviewers, we need editors, we need readers, we need all of it. It’s like the music community, where performers, audiences and critics are crucial. It’s not just the music,” he said.

There needs to be funding for the translator, which can mean the National Endowment for the Arts, private foundations, state agencies or even foreign countries. The French government, for instance, has many generous translation grants, and the French Embassy even runs Albertine, a bookstore on Fifth Avenue in Manhattan devoted to French literature in the original and in translation. Israel has some funding through the Institute for the Translation of Hebrew Literature, and the city of Tel Aviv occasionally funds translations. There is always grumbling on who is funded and why — and readers at home may be entirely unaware of the politics involved when it comes to which writer’s work gets translation funding and which translator is selected to do the work.

The ability to publish an excerpt on a widely read site like Words Without Borders can be an equalizer. But funded or unfunded, wealthy country or poor country, major language or regional dialect, an editor like Harris still needs to say yes.

Harris knows that to keep doing the work she does, she has to have established translators working closely with early-career translators. In addition to a growing number of university MFA programs in both the U.S. and the U.K., there are thriving new mentorship initiatives like those at The National Yiddish Book Center and the American Literary Translators Association.

“It’s terrific to see so many senior translators mentoring younger translators,” Harris said. And perhaps that extends to translation editors, too, with famous wall-sized maps.

Aviya Kushner is the Forward’s language columnist. She is the author of “The Grammar of God” (Spiegel & Grau, 2015). Follow her on Twitter, @aviyakushner

Why This Literary Translator Will Do Yiddish — but Not Haruki Murakami