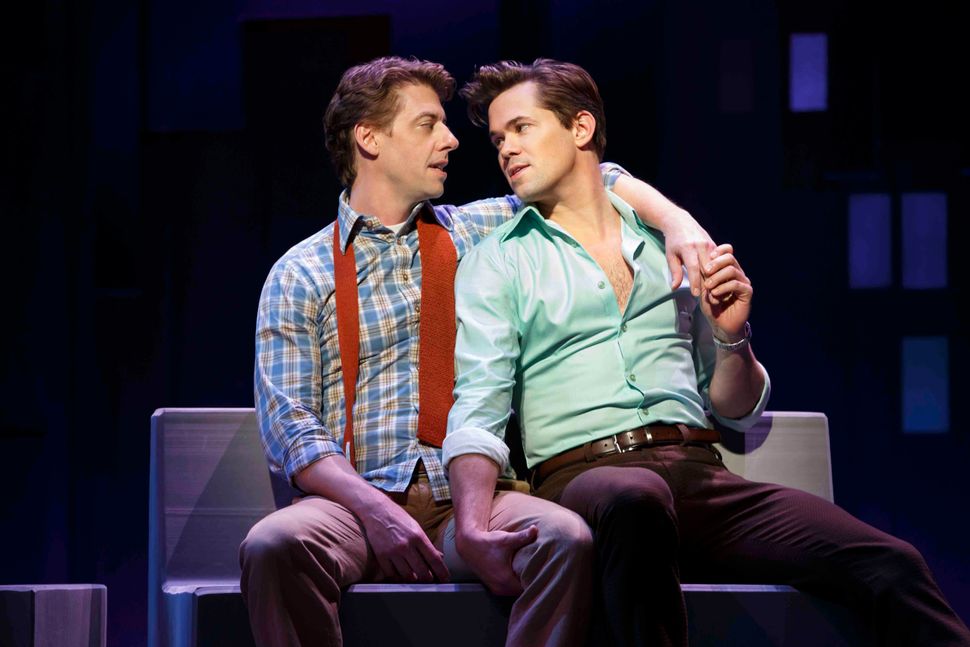 Its very first word, shouted by men dressed as Biblical Hebrews and bathed in a quick flash of light, is “oy.” Its first song is titled “Four Jews in a Room Bitching.” And it ends with a bar mitzvah. “Falsettos,” a groundbreaking gay musical that opened in a beautiful, emotional revival at the Walter Kerr last night, is, by 2016 standards, not especially gay. What it remains is deeply Jewish.

“Falsettos” is really the combination of two works by William Finn, who wrote the music and lyrics, and James Lapine, who wrote the book with Finn. The first is “March of the Falsettos,” which debuted in 1981, and tells the story of Marvin’s search to preserve his family after he’s left his wife, Trina, for his new partner, Whizzer. The other is “Falsettoland,” which arrived nine years later, about this new family’s lives as Marvin’s son, Jason, prepares for his bar mitzvah and Whizzer dies of what we know but he doesn’t is AIDS. They were combined into “Falsettos” for a 1992 Broadway run, which won Tony Awards for Best Score and Best Book of a Musical. There was never a complete cast recording made, and there’s no video available, but it’s beloved — canonical, even — to those who saw it originally, as much for Finn’s music and lyrics as for the world they saw on stage: liberal, smart, neurotic, and open about their sexualities.

I never saw it, and remember only, as many others do, the Tonys performance from 1992, “The Baseball Game,” with its unforgettable Finn lyric (at least to a lousy-at-Little League Jewish kid on his way to being a professionally theatergoing gay Jewish adult): “We’re sitting/ And watching Jason play baseball./ We’re watching Jason play baseball./ We’re watching Jewish boys/ who cannot play baseball/ play baseball.” The crowd who’s watching is Marvin, Trina, Trina’s new husband, Mendel (who used to be Marvin’s shrink), Whizzer, and new lesbian neighbors, Charlotte and Cordelia. Part of what was remarkable then was the matter-of-fact treatment of bourgeois homosexuality: Trina is broken up that her husband left her, not that he turned out to be gay. Whizzer is an attentive step-parent. The lesbians are most interesting for being goyim.

As revived in 2016, that matter-of-factness exists not just on stage but also in the real world, or at least in the real world of New York, and so the gay story seems almost incidental. Instead, “Falsettos” becomes a story about love and family — about making your own chosen family, which is of course a classic gay trope, but also, in its message of accommodation and dedication and, well, l’dor v’dor, very Jewish.

The first act of “Falsettos” is set in 1979, and it’s a sort of campy pageant. Near entirely sung-through, it’s less about story than about introducing us to this group of people, portrayed here but a near-ideal cast.

Christian Borle plays Marvin as a relatively calm center of this storm, determined maintain his “tight-knit family” of “kid, wife, lover.” Andrew Rannells is both slightly preening and very sweet as Whizzer, the stylish (and half-Jewish) man frumpy Marvin has fallen for, who develops a real connection with Jason. Stephanie J. Block gives a Tony-worth performance as Trina, whose banana-chopping meltdown in “I’m Breaking Down,” while cooking a “banana-carrot surprise” — an unusual combination but an appropriately phallic one — is funny and wrenching and nearly stops the show. Brandon Uranowitz plays both the Jewyist and least credible character, the shaggy psychiatrist who treats Marvin and falls for Trina. And Anthony Rosenthal makes his debut as Jason, sweet-faced, sweet-voiced, and confident — the one stable presence amid all the adult mishegas.

The second act is set two years later, in 1981, in, as Marvin and Trina sing, “the year of Jason’s bar mitzvah.” This one is more narrative, focused on Marvin’s relationship with Whizzer and his relationship with his son, as Jason prepares for the big day. Of course the stories align, as Jason agonizes about whether and where to have the bar mitzvah — his parents are leaving the choice up to him — and Whizzer comes down with a mysterious, deadly illness. (If 1981 seems early for AIDS, in fact that was the year of its first appearance, with 121 men dead of what was then sometimes called GRID, or gay-related immune deficiency.) The two stories align in the most beautiful way: Jason and Whizzer have a bond, and Jason announces that he’ll have his bar mitzvah — in Whizzer’s hospital room.

This musical, and especially this production — directed by Lapine, who also directed the original — has been bringing its audiences to tears, and this was the moment that did it for me. Throughout the musical, Jason is the level-headed beacon of sanity, and he’s the one who knows what’s most key to his bar mitzvah is making sure that everyone important to him is included. There’s not a minyan in that hospital room, but there are all the people who’ve raised him, all the people who matter. That’s not Talmud, but it’s a loving, open, communal instinct that’s my definition of what’s important about theater, and about Judaism.

Jesse Oxfeld has written about theater for the New York Observer and Entertainment Weekly.