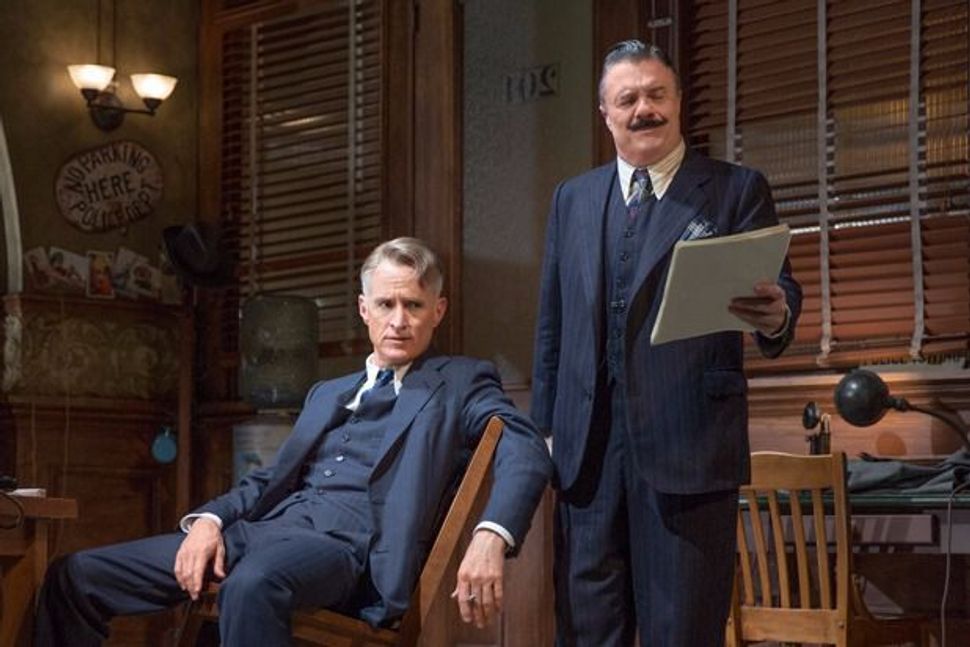 An upwardly mobile reporter is about to marry a nice girl and move into advertising, to make more money. A tough-talking cop rants about nonexistent subversives, to boost his own profile. The mayor is more interested in mollifying key constituencies than in fighting for justice. And the powerless cleaning lady keeps getting manhandled.

“The Front Page,” a get-me-rewrite newspaper comedy that opened last week at the Broadhurst Theatre, was written almost a century ago, debuting on Broadway in 1928. But it manages to hit more than a few very current points, if only in passing. Still, this fourth Broadway revival — and there’s also the 1931 Howard Hughes film, the 1974 Billy Wilder-Jack Lemmon-Walter Matthau film, and its adaptation into 1940’s “His Girl Friday” — is studiously old-fashioned, down to producer Scott Rudin’s move to welcome reviewing press only at opening night. (Typically, these days, reviewers see one of a few performances before the formal premiere. For “The Front Page,” the major critics were invited to opening night and expected to rush back to their newsrooms and file; lesser critics, including this one, were accommodated over the weekend.)

And the news to report is that while this new production, directed by Jack O’Brien, is exceedingly well-performed and in parts achingly funny, it’s not quite stop-the-presses exciting.

The three-act play is set in the bustling press room of the Chicago Criminal Courts Building in October 1928, when an alleged Bolshevik is about to be hanged for shooting a black Chicago cop. (The detailed, lived-in set, by Douglas W. Schmidt, gets — and deserves — its own applause.) No one is convinced the man is guilty, but the mayor and the sheriff need black voters to support them in the upcoming election. When the condemned man escapes, pandemonium ensues, and only Hildy Johnson, the star reporter for the Examiner who’s trying to quit his job, is left in the press room when the convict, a man named Earl Williams, breaks in through the window. Johnson knows he’s got the big story, but he needs to keep Williams from his competitors, which will require the help of his tyrannical boss, a hiding place in a rolltop desk, and also he’s got to catch a train to New York to get married. There’s fast-talking and doors slamming, and of course hilarity should ensue.

Sometimes, especially in the third act, it does. John Slattery is characteristically ingratiating and amusing as Johnson. Jefferson Mays is drolly persnickety as upper-crust, hypochondriac competitor from the Tribune. (That he now works for a company called Tronc would no doubt give him hives.) Everyone else is as good, and funny: John Goodman as the buffoon sheriff, Dann Florek as the blustering mayor, Sherie Rene Scott as Williams’s quivering girlfriend, and especially Holland Taylor as Johnson’s imperious mother-in-law-to-be and a top-notch rogues’ gallery of New York character actors as the other press room no-goodniks, including Dylan Baker, David Pittu, Joey Slotnick, and Lewis J. Stadlen.

But the comedy only truly takes off thanks, unsurprisingly, to the entrance of Nathan Lane, as Johnson’s editor, Walter Burns. In a clever bit of stagecraft, O’Brien has Lane enter quietly while the actors — and the audience — have their attention focused to one side of the stage. Most of the cast then runs out of the pressroom, and there Lane is, standing upstage center.

Lane is a comic genius, of course, and he and Slattery shine when the slapstick gets going, with gangsters coming in and out, tricks, double-crosses, the man hidden in the desk. If that act is worth the price of admission, the first two make you work for it. There’s a lot of exposition, a lot of yelling, and not so much high comedy. (During the second intermission, I watched two matinee ladies walk upstairs from the restrooms and out the front door. “It’s just a lot of stupid shouting,” one said to the other, not entirely unfairly.) Lane’s timing and mugging and pauses are incomparable, and when he’s onstage he elevates both the other actors and the material.

Ben Hecht and Charles MacArthur, two former Chicago newspaper reporters, based the play on their experiences working for the Chicago Daily News and the Chicago City News Bureau. They went on to become prolific and successful Golden Age screenwriters; Hecht was nominated for six Academy Awards and won two, with MacArthur came to New York, married Helen Hayes, and was a supporting player in the Algonquin Roundtable. (The latter’s brother was John D. MacArthur, who with Catherine T. created the foundation that bestows genius awards.)

Hecht would go on to become a leading Zionist in the runup to World War II, and he devoted much of his writing to publicizing the plight of Europe’s Jews. In The Front Page, there’s a hint of a social conscious, in the sympathetic depiction of Williams, who’s repeatedly called a Bolshevik, repeatedly insists he’s an Anarchist, and is generally portrayed as a schlemiel. So, too, in the characters of the sheriff and mayor, who are feather-bedding empty suits, concerned only with their own power and not at all with their constituents.

But this isn’t a play with a message; it’s one with comic schtick. When that schtick works, in the hands of this talented, starry case, it works wonderfully. It’s just too bad this “Front Page” didn’t get a tighter edit.

Jesse Oxfeld has reviewed theater for the New York Observer and Entertainment Weekly.