Why We Mourn Leonard Cohen in the Era of Trump 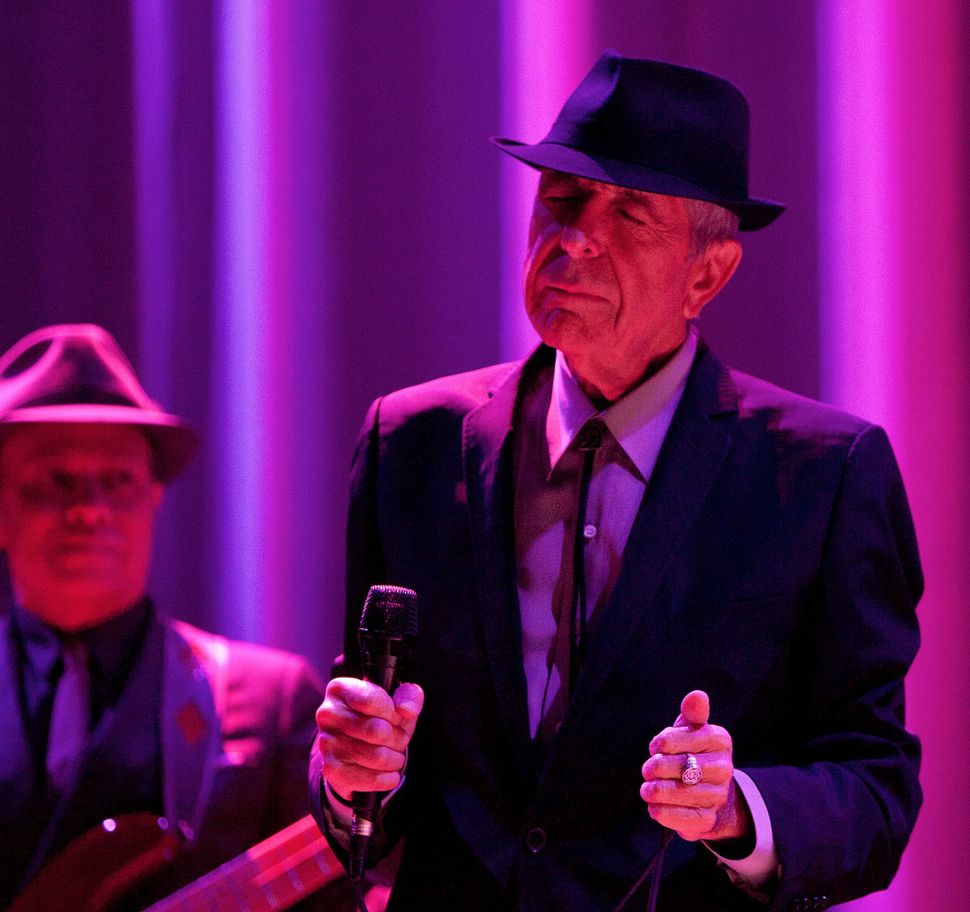 Historians will probably discuss Leonard Cohen’s death alongside two very different developments, Trump victorious and Bob Dylan’s Nobel Prize win. “Everybody Knows,” one of Cohen’s bleakest songs, has instantly become an anthem for the despair felt by much of the world in the wake of the election.

The poetic power of Dylan’s lyrics is impossible to deny, but he remains, first and foremost, a singer-songwriter rooted in “the great American song tradition,” to quote the Swedish Academy’s verdict. Leonard Cohen has always primarily been a poet. Contrast Dylan’s impetuousness with Cohen’s earnestness and Cohen’s economy with Dylan’s verbosity. This doesn’t take away at all from Dylan’s greatness. But the gifts of these two geniuses — who were friends — are very different.

Not that you need to choose between the two. But Cohen gets under your skin in a way that Dylan rarely does. Put another way, Dylan would make a raucous friend for a wild night out. But you’d prefer Cohen as a confidante and boon companion.

I think this is primarily why the announcement of his death (related to cancer, it now seems) on Thursday has grieved so many millions around the world. It is difficult not to feel that we’ve lost a close friend, a great man and a real mensch.

Leonard Cohen achieved consistently what others artists might hit on a few times in an entire career: the ability to make you feel he was talking directly to you. That must be why I was so mesmerized by the songs of his I heard growing up, the ones featured on “Greatest Hits,” a 1975 compilation that featured highlights from his first four records, “The Songs of Leonard Cohen” (1967), “Songs from a Room” (1969) and “Songs of Love and Hate” (1971) and “New Skin for the Old Ceremony” (1974).

I was born in 1984, the year that Cohen’s seventh studio album “Various Positions,” which features “Dance Me To The End Of Love,” “Hallelujah,” and “If It Be Your Will,” was released. For a long time, however, the entirely acoustic “Greatest Hits” constituted my whole experience of Leonard Cohen. Yet those twelve songs burned into me with their tenderness and agonized beauty, so that whenever I hear one of them, it’s as if a profoundly comforting voice is calling me back to some previous existence.

His lyrics have the poignancy of Yeats or Auden at their sparest and most shorn: a raw intimacy and emotional nakedness that is never trivial or rude. Think of that line from “Seems So Long Ago, Nancy,” a song about a girl who commits suicide on “Songs From A Room,” “In the hollow of the night / Where you are cold and numb.” Auden could have penned those lines. In fact, I spent years mistakenly thinking he had. When I realized my mistake, I made the happy discovery that Auden’s “As I Walked Out One Evening,” fits perfectly with Cohen’s melody.

In the pantheon of twentieth century Jewish singing bards — Dylan, Lou Reed, Phil Ochs, Paul Simon, Serge Gainsbourg — Cohen is the most intensely Jewish with his fine-tuned liturgical sensitivity and his understanding of the incantatory power of the word. His songs are frequently shot through with Old Testament imagery, from “The Story of Isaac” on “Song from a Room” through to “Steer Your Way,” the last vocal track on the valedictory “You Want It Darker,” his 14th and final album that was released last month.

The scriptural and kabalistic references spoke to me from an early age, but I only understood much later how his lyrics fused the spiritual with the erotic. Cohen also sought ecstatic experiences from Zen Buddhism to Scientology to LSD. As a kid I puzzled over the Christian references in songs like “Suzanne,” “So Long, Marianne” and “Last Year’s Man.” I had no way of processing how he blended Jewish and Christian imagery until I understood not only how central Christianity was to Western Art, but also how Christ’s message was as total as love and as insistent as sexual longing.

It is true that Cohen’s music — and his voice — is often dark, but to me it is rarely bleak. It is impossible not to hear joy and sweetness mixed in with the pain and sadness. Even at his most pessimistic and irony-laced, in songs like “Everybody Knows” or “The Future,” Cohen’s humor and belief in redemptive love shine through.

Those songs were written while I was growing up, and while I listened to them when I was somewhat older, the album that fascinated me the most as a teenager was “Death of a Ladies’ Man,” Cohen’s 1977 collaboration with Phil Spector. The critical and popular consensus is that Spector, who mixed the songs in secret (i.e., without Cohen’s knowledge or consent), set some of Cohen’s most explicit poems on a collision course with “The Wall of Sound.” It certainly sounds like nothing else in Cohen’s catalogue: a manic, garishly overproduced rock opera that nearly spirals out of control. It seemed to violate everything that made Cohen uniquely Cohen. His fans declared it vulgar and even the singer said he felt betrayed by Spector. I’m quite possibly alone in considering Death of a Ladies’ Man an overlooked masterpiece. It certainly is the result of the meeting of two incredibly mismatched artistic personalities, but the result is staggeringly powerful and fierce. Even if you were among those who condemned the album when it came out, I suggest you give it another spin, from the melancholy simplicity of the opening ballad “True Love Leaves No Traces” to the raucous side two starter “Don’t Go Home With Your Hard On” (which features Dylan and Ginsberg singing back-up) to the epic slow burn of the title track, the record’s grand finale. Perhaps I grew so fond of the album precisely because it was so unloved, and I often wondered if Cohen ever reversed his opinion on it.

I saw Leonard Cohen twice when he was on tour between 2008 and 2013: first in Manhattan, then in Berlin. These were extraordinary shows, enhanced by an excellent song list and a fantastic band. Cohen was elegant and graceful, his voice deeper and more expressive than ever, but the word that comes immediately to mind in describing him then is “generous.” It refers not only his repeated thank you’s to the audience and the numerous encores he played, but also to his warmth towards the band and how he repeatedly dropped to his knees in devotion. He put on a great show, but there was also a feeling of witnessing something more, of almost being in the presence of a holy man.

Cohen played nearly 400 shows over that five-year period, brandishing his best-known songs and occasionally introducing new ones that would show up on his albums “Old Ideas” (2012) and “Popular Problems” (2014). You get a sense of his vitality and gratitude on his 2009 “Live on London” album. Between songs, he chats with the crowd in a self-deprecating and disarmingly personal way. “I also studied deep in the philosophies and the religions but cheerfulness kept breaking through,” he said to laughter, before seguing into the next song: “But I want to tell you something that I think will not easily be contradicted: There Ain’t No Cure For Love.”

This was still years before I would read Cohen’s first novel “The Favorite Game,” which he finished at his house on the Greek island of Hydra in the early 1960s, an autobiographical Bildungsroman told in simple yet elliptical prose. It is Cohen’s “Portrait of the Artist as a Young Man,” following him from his observant upbringing in Montreal to his flight to New York and first stirrings of literary fame (not to mention female adoration). In the aftermath of Cohen’s death, “You Want It Darker” has jumped to the top of the music charts. It remains to be seen whether Cohen’s non-musical body of work, the novels and the poetry, will also enjoy a popular revival.

At a bookshop in Brookline, Massachusetts, I recently came across a 50-year-old Bantam trade paperback of Cohen’s second poetry collection, “The Spice-Box of Earth.” Reading it several nights ago, I found a poem called “Before The Story.” With an epigraph from the Second Book of Samuel, it feels in some ways like a draft for “Hallelujah,” arguably Cohen’s most popular song. The third verse goes:

“Far from the roof, the woman oh the girl, Bathsheba, bares her dripping shoulders in a secret room, far from any lover, far from any man.” >

The miracle of Cohen’s lyrics can be explained by the combined power of their chant-like force, syllabic precision and imagistic vividness. This is hard earned simplicity. “I only know that if I write enough verses, and keep discarding the slogans – even the hip ones, even the subtle ones – that something will emerge that represents…” Cohen trailed off in an interview with David Remnick that was featured this weekend on New Yorker Radio. “I’ve often said that the reason my writing is so slow is that I have to finish the verse before I discard it,” he concluded.

Right now, with all the outpouring of Leonard Cohen appreciations, appraisals, reflections and reminiscences, I’m learning so much about his life and his work. At an event in October celebrating the release of “You Want It Darker” at the Canadian Consulate in Los Angeles, Cohen deflected a question about Dylan’s (surprisingly) detailed analysis of his songs in Remnick’s recent New Yorker profile, and instead sang his colleague and friend’s praises with eloquence and humility. “I will comment on his receiving the Nobel Prize, which to me is like pinning a medal on Mount Everest for being the highest mountain.”

At shabbos dinner at my synagogue in Berlin, a congregant from Montreal distributed the lyrics of “Hallelujah” along with the zmiros books, while we endlessly discussed the election. The entire table joined in, and even though I’m sure we sounded like “drunks in a midnight choir,” that didn’t stop us from giving the song our all.

At the bottom of the sheet was written “Leonard Cohen, Z”L.” When the song was finished, I felt lighter than I had the whole wretched week, because of what I now understood.

He is standing before the Lord of Song.

Why We Mourn Leonard Cohen in the Era of Trump