If Trump Wants to Outlaw Flag Burning, He Should Look To Israel 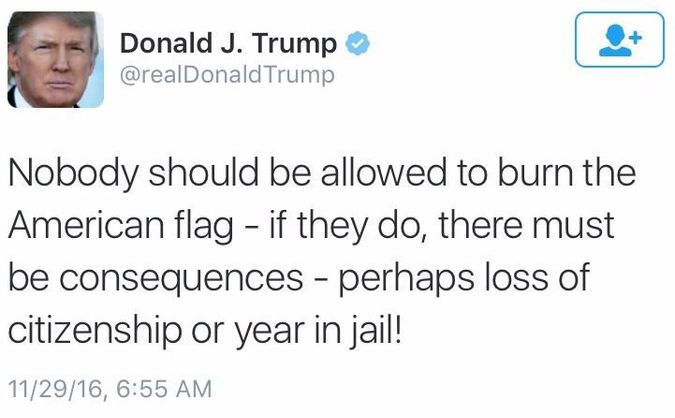 The tweet is possibly a response to the protests occurring at Hampshire College, a small liberal arts school in Amherst Massachusetts. The protesters are upset that Hampshire decided to remove all flags from its campus after an incident on November 10th or 11th in which the campus’s American flag was burned.

This is not the first time that flag burning, a free expression act protected by the First Amendment, has come under attack. In 1968, in response to numerous flag burnings at Vietnam War protests, Congress passed the Flag Protection Act which made it illegal to desecrate the flag and enacted a penalty of a maximum one year prison sentence, a fine, or both.

In 1995, Congress again tried to proscribe flag burning, this time with a constitutional amendment, but this effort, and all subsequent amendment efforts, failed (it is important to note that this has been a bi-partisan issue – Hillary Clinton introduced an unsuccessful bill to outlaw flag burning in 2005).

America is hardly alone in its desire to limit free speech as it pertains to the flag, and lawmakers itching to outlaw flag burning need look no further than Israel’s Flag and Emblem Law. The Flag and Emblem law, which has been on the books since 1949, established a maximum one year penalty, a fine “not exceeding three hundred pounds [or lira]” (Israel has since switched to the shekel), or both.

While the original 1949 law is restrictive enough, the Knesset recently approved an amendment that would bring up the maximum prison time to a period of three years and the maximum fine to around $15,000. The amendment also gives the Israeli courts the power to deny state benefits, such as health care or social security, for a period of six years to those convicted under the law.

While none of the failed U.S. laws were quite as severe as the new Israeli law, and Donald Trump’s tweet does not constitute a concrete policy proposal, it is worth noting that restrictions on flag burning enjoy a decent amount of support amongst the American public. A 2006 Gallup/USA Today poll (recent data is scant) shows that 56% of respondents were in favor of a constitutional amendment granting Congress the power to prohibit flag burning.

If Trump Wants to Outlaw Flag Burning, He Should Look To Israel