Are Liberals Being Too Mean to Trump Voters? 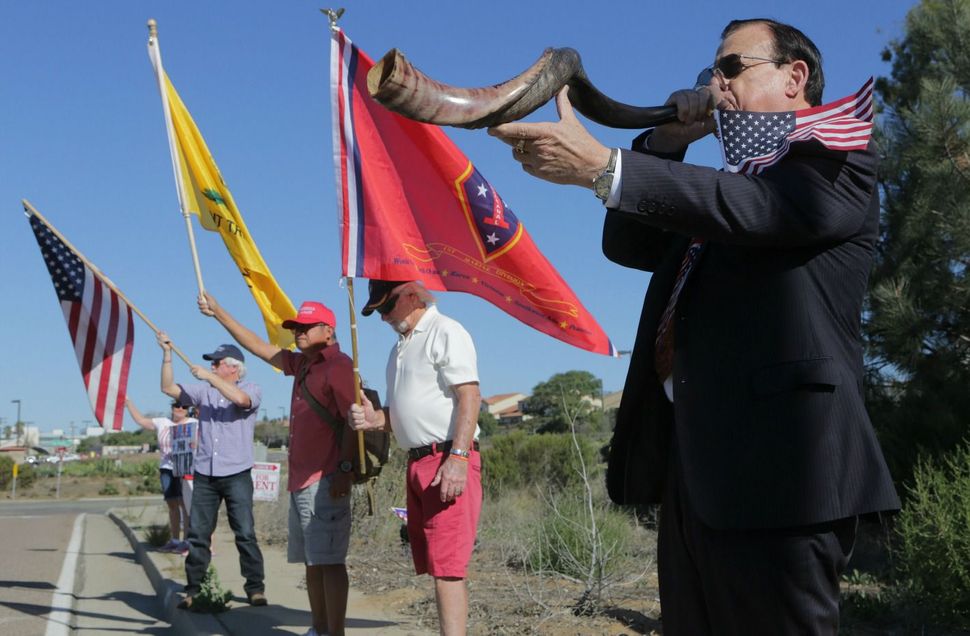 When my friend Jonathan Tobin and I began planning last spring for a cross-country synagogue speaking tour in the fall, we fully expected to meet with fireworks over Israeli policy. In fact, that was the point of our tour. At each stop, Jonathan the conservative Commentary blogger and I the liberal Forward columnist would argue the issues, as we’ve done for years. We wanted to show our audiences how Jews could debate Israel and its dilemmas with respect, even friendship. Given how divided communities have become, our host rabbis couldn’t wait for us to arrive.

What we hadn’t counted on was President-elect Donald Trump.

Of course, we knew that with our tour beginning November 10, two days after Election Day — and taking us to 12 cities in 13 days — the presidential race would be on people’s minds. Nobody anticipated a Trump victory, though. Nor did we expect the intense wave of emotion that would sweep the country in its wake, nor the way it would divide the Jewish community.

It’s true that Jewish communities have found it increasingly difficult in recent years to maintain a civil tone when conducting public dialogue on divisive topics, especially where Israel is concerned. Public programs on Israel tend to end in shouting and name-calling, to the point where some congregations have simply stopped mounting discussions of Israel. But the election of Trump as our next president has introduced a whole new level of acrimony. The outcome doesn’t provoke discussion but ends it, bringing stony silences and ruptured friendships. One rabbi told us that Hebrew school parents who had backed Trump were telling their children not to discuss how they’d voted with classmates, for fear that the family would be ostracized.

Jonathan and I weren’t fully prepared to navigate this emotional thicket in the same manner that we presented the Israel debate. The fact is that we didn’t disagree. Tobin and his magazine were opposed to Trump throughout the campaign, as were other journals of conservative thought like Weekly Standard and National Review. Trump voters in the audience didn’t find themselves validated in our back and forth in the same way that pro-Israel liberals were. Looking out from the pulpit, you could see them in the crowd, identified by the smirks they wore when I spoke and the looks of disappointment they gave Jonathan. After each event they crowded around him, apparently seeing him as the closest thing they had to an ally.

They’re not few in number. Exit polls suggest that Trump received about 25% of Jewish votes to Hillary Clinton’s 70%, with the rest going to Gary Johnson and Jill Stein. In other words, Clinton did worse among Jewish voters than most other recent Democrats, and Trump’s score among Jews was right in the middle of the recent Republican range. Jewish Trump voters have a case to make that the acrimony they’re encountering is unfair.

The acrimony isn’t just among Jews. The New York Times, in a lengthy November 15 account, described post-election rifts dividing friends and even family members across the country. By and large it appears to be Democrats and liberals who are drawing the line, cutting off ties with people who voted for “a man they say stands for things they abhor.” One interviewee said she felt she’d been living among people “who have been hiding their true selves, and now with this vote, their true selves are more apparent.” Trump voters, in turn, express resentment at being accused of racism and spurned by their own relatives.

The Times report describes the overall trend as the latest example of a growing culture war among Americans segregated by class and education. It doesn’t explain what makes this election different and how it became, as it seems, a turning point.

Another attempt at explaining the phenomenon comes from Dennis Prager, the conservative radio host and sometime Jewish philosopher. In his November 22 column in the Jewish Journal of Los Angeles, he describes the Times account and adds some cases of his own, including callers to his radio show who say “their daughters” won’t let them see their grandchildren because the elders voted for Trump.

Prager cuts right to the question that the Times dances around, namely why the “phenomenon of cutting off contact with friends and relatives” is “so one-sided.” After all, he writes, “conservatives were not one whit less fearful of Hillary Clinton and the Democrats than Democrats were of Donald Trump and Republicans.”

It’s an interesting thesis, particularly if you believe that the way to explain one group’s vilifying of another group is to vilify right back at them. But it still doesn’t answer the critical question: Why is this presidential election different from all other presidential elections? We’ve had close elections, disputed elections, even elections that produced a result which the losers rejected. But this is the first election, I think, in which the losing side repudiated not just the winning candidate, but his voters.

There are at least two factors at work here. One is the profound grief felt by many Democrats, especially women activists, at the unexpected failure of what they were convinced was going to be a historic achievement, the election of the first woman president. Many believed that the tides of history had turned in their favor, that the American people were fully ready to finalize the equality of women, as they had accepted so many recent social and cultural changes, by placing a woman in the nation’s highest office. It was deeply shocking to find that the public’s readiness had been overestimated, that the longed-for change that seemed so imminent had in fact not yet arrived.

The second factor is, quite simply, Trump himself. He was not a presidential candidate like other candidates before him, and he does not appear likely to be a president like those before. His declared positions on religious and ethnic minorities, his frivolous attitudes toward treaties and international law, toward nuclear weapons use, press freedom and the broader First Amendment, indeed his very approach to campaigning as an exercise in insult and vilification — all these things go beyond normal political debate.

Liberals’ objections are not over policies or ideology, but fundamental values of democracy, even decency. To understand liberals’ unusual outrage this year, one must recognize Trump’s deviance from the accepted norms of American democratic politics. He has changed the rules without the consent of the other side.

Conservatives, at least the Trump voters, may like the changes they’ve seen. But they need to understand that, just as many liberals may have overestimated the readiness of fully half the public for rapid social change, conservatives have underestimated the assault that Trump represents on the values and sensibilities of the other half.

Are Liberals Being Too Mean to Trump Voters?