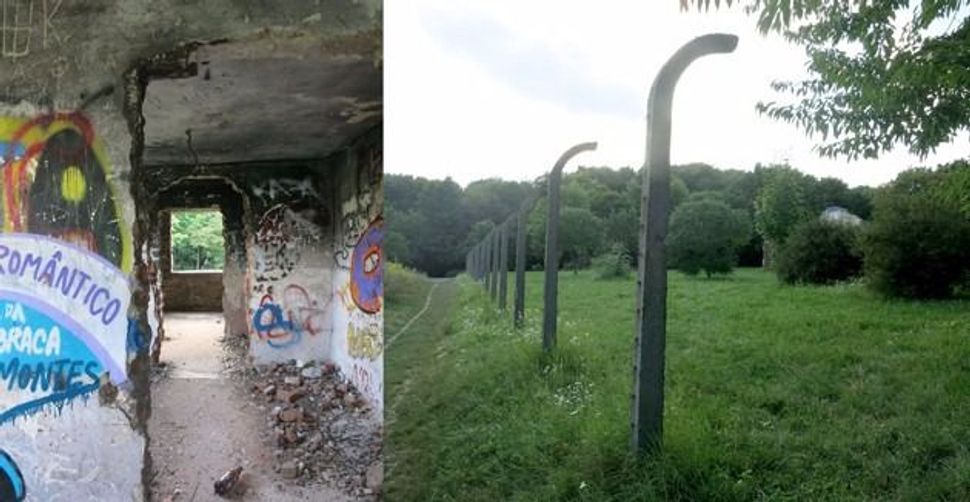 Nolan Gurfinkiel belonged to the dwindling tribe of Holocaust survivors who used to eat at my parents’ Shabbos table. He was a Schindler Jew, one of about 1,200 Krakow Jews who survived through the good offices of Oskar Schindler, Europe’s most famous Righteous Gentile.

Nolan wore dark eyeglasses and spoke through clenched teeth, even when commenting on the weather. He was in his mid-sixties when I met him, his wife Rosy and their son Scotty, a physicist who studied liquid crystals and espoused a rigid interpretation of Jewish law. An undutiful daughter was known to live in Australia, but she was a verboten topic of conversation.

When Nolan learned that I had published a novel, he asked me to help him write a book about his war-time survival. I declined. I was put off by his anger. It emanated out of him like a missile defense system. The bigger truth: I was a snob. How could Nolan think that I, a published novelist, had time to waste on his amateur storytelling? 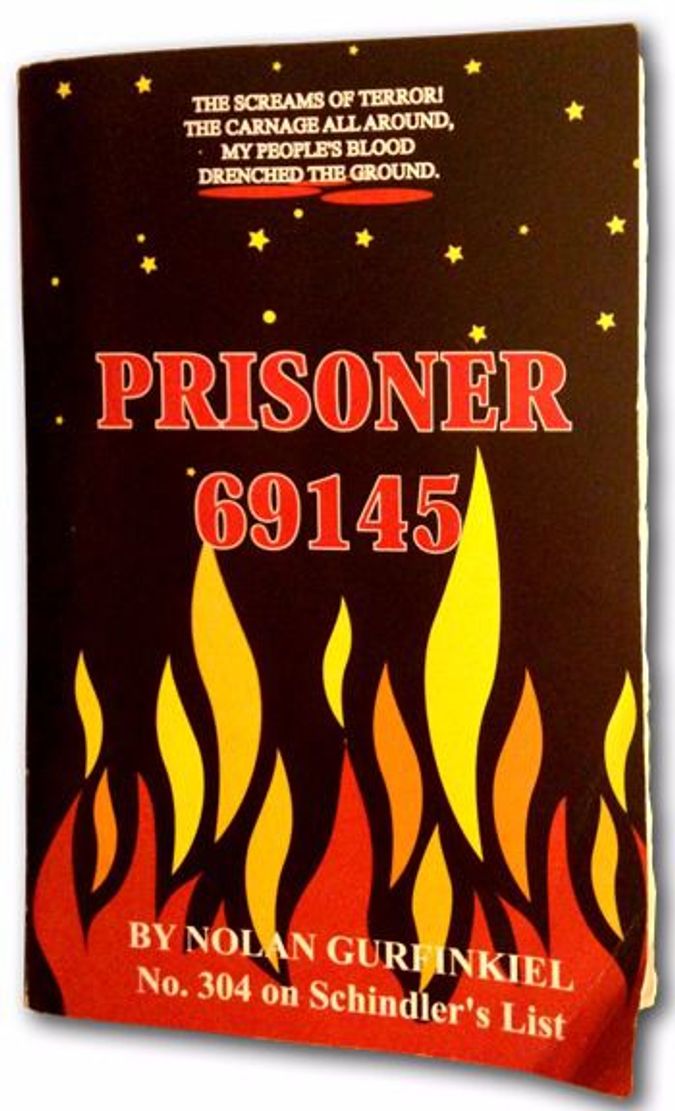 Image by Courtesy of Barbara Finkelstein

I was visiting my parents in early August 2016 – thirteen years after Nolan’s death – when I saw a self-published copy of his memoir in the living room. “Prisoner 69145” had been so shoddily produced that the glue in the spine had dried out. Worse, the cover copy – “The screams of terror! The carnage all around! My people’s blood drenched the ground!” – confirmed my gut feeling that Nolan, a man with little formal education, had written a tacky book.

I flipped through it. Nolan was from Krakow. Interesting. My son and I were headed to Poland for a family roots trip and our first stop was Krakow. I borrowed the book from my parents, stashed it into my laptop case and begrudgingly cracked it open over Greenland.

I couldn’t put it down.

Earth, conceal not my bloody stupidity.

In his opening chapter, Nolan writes that before September 1, 1939, “it seemed like no clouds were hanging over our heads.” Indeed for the first twelve years of Nolan’s life, the Nolan family “suffered no hunger, no want.”

Srulek and Roza Nolan operated Bufet Warszawski, a prosperous club and restaurant on Starowiślna Street midway between the family’s apartment and their two children’s Hebrew gymnasium. Nolan had more than occasional scuffles with a “gang of Catholic boys who called me a dirty Jew,” but he learned to give as good as he got. Overall, Nolan’s prewar memories are happy. He remembers fondly the gardener next door who threw fruit and walnuts directly into his open bedroom window.

When the Nazi invasion of Poland turned Nolan’s life upside down, he and his fellow Krakovians could not fathom what was going on around them. Nolan writes about the disbelieving apartment tenant who suggested that the German invasion was probably a Polish civil defense test.

He himself was a “bit afraid of war, yet I was genuinely stimulated by all the excitement.” Recently, Nolan had seen “Confessions of a Nazi Spy,” a 1939 thriller featuring Edward G. Robinson. “I’d be looking at the screen and wish that I would live through a war, with all the glory and triumph in a well thought-out and executed plot,” he writes.

On September 3, England and France declared war on Germany. The Gurfinkiels were optimistic: “Germany wouldn’t have a chance … the war would quickly and decidedly end.”

Instead, the Jews of Krakow entered into a Nazi Saturnalia of theft and humiliation.

Besides having to witness physical attacks on bearded Hasidim, Jews had to surrender their restaurants, stores, financial institutions and factories to Gestapo-appointed commissars. What ensued was a carpetbagging assault on Krakow by Germans, Austrians, Czechoslovakians and Polish Volksdeutsche – “penniless entrepreneurs, war profiteers and fortune seekers, all members of the Nazi party” eager to cash in on the destruction of European Jewry.

The Jews’ fate in Poland at the hands of the Gestapo, the ethnic German Volksdeutsche, or Sonderdienst, and the Ukrainian Hilfspolizei are well known to students of the Holocaust. Lesser known are the activities of the Ordnungsdienst, or OD, the gray-suited Jewish police who worked with the SS to round up Jews and send them to their death.

Nolan’s memoir, compelling in its own right, is all the more significant because of the OD brutalities he witnessed as a child in Krakow and as a slave laborer in Plaszow, the Nazi concentration camp 4.5 kilometers from his old home on Blich Street.

Nolan writes about the special task for collaborator Jews as outlined in Operation Reinhard, the German plan to build an archipelago of death camps in eastern Poland and rid Europe of the Jewish menace. In Krakow, Operation Reinhard began on the morning of March 13, 1942. The Sonderdienst and SS troops marched, singing, into Kazimierz, the Jewish ghetto, and connected there with the Jewish Ordnungsdienst. Working hand in hand with the OD was a Jewish informant named Szymon Spitz. Nolan’s parents had sheltered the German-Jewish Spitz in their home after Kristallnacht. With Spitz’s help, the SS compiled lists of Krakovian Jews for transport to the camps.

Szymon Spitz aided in a perverse request by a Sturmbannführer (major) who sought an audience with the Tzaddik of Belzec and Rabbi Lajzor Landau of Bohnia. On November 27, 1942 in the Ordnungsdienst hall, Spitz ordered the Tzaddik to bestow a blessing on the Sturmbannführer before the German commenced a pogrom. Nolan writes bitterly that in return these “men of faith” were granted freedom and safe passage out of occupied Europe.

Another OD man, known as Immergluck, arrived at the Gurfinkiels’ ghetto apartment after dawn on November 28. When Immergluck couldn’t find the man he was looking for, he arrested Nolan’s father. The fact that Nolan and Immergluck’s nephew had been school friends meant nothing to the OD man. Nor did it matter that, like most OD informers, Immergluck used to eat at Bufet Warszawski.

“Come on,” Immergluck shouted at Srulek Nolan. “It’s time to go. We haven’t got all day.”

Nolan and his family followed Srulek to Krakow’s Plac Zgody, the transit station to Auschwitz, Belzec and Treblinka. OD Immergluck prevented Nolan, his sister and his mother from watching at close range. “The only thing I saw from a distance was my father’s arm waving goodbye,” Nolan writes.

I did not know about the scars on Nolan’s back until I read “Prisoner 69145.” They were the result of fifty lashes administered on two consecutive days by two OD men, one of them bearing my family name, Finkelstein. (No relation, I pray).

Nolan’s crime: He could not stop a Ukrainian Hilfspolizei from driving a car belonging to Amon Goeth, Plaszow’s Obersturmführer. The whippings, along with SS beatings for the crime of misplacing a cap or for inexpertly wielding a pickaxe, were the reason for Nolan’s lifelong headaches and sensitivity to light. Hence, the dark eyeglasses Nolan wore all the time.

A ray of hope came when Nolan was reassigned to Oskar Schindler’s newly acquired factory in northwestern Czechoslovakia.

Nolan’s take on Schindler is notable: It bears little resemblance to the hagiographic treatment Schindler gets in Steven Spielberg’s “Schindler’s List.” On the one hand, Nolan writes, he never once saw Schindler “beat, terrorize, murder, or harm those in his service.” And he concedes that Schindler prevented “his” Jews from being transported to Gross-Rosen, a slave labor camp with a hundred “satellite” outposts. All good.

On the other hand, though, Nolan recalls Schindler’s friendship with Obersturmführer Goeth, and Schindler’s unrepentant use of Jewish factory workers to enrich himself. Nolan ultimately learned that Schindler surrounded himself with eight pajama-clad Jews to camouflage his flight out of occupied Poland.

“They took to the road in Oskar’s Mercedes Benz and a truck bound toward the Swiss border of Konstanz,” he writes. “Beside the participants, the vehicle was crammed with payola obtained from the Jewish people. The truck pulled a trailer packed enormously with valuable loot.”

A far cry from Spielberg’s weeping Schindler, who laments not having done enough to save more Jews.

I don’t want to overstate the power Nolan ascribes to the Ordnungsdienst in “Prisoner 69145.” As Nolan makes clear, the Jewish collaborators were the Final Solution’s useful idiots, not its architects. In the end, men like Szymon Spitz were executed on a high mound at Plaszow and cremated.

Jewish collaborators represented a tiny minority of Polish Jews, and if any conclusion can be drawn from “Prisoner 69145,” it is that some victims will save their own skins by sacrificing others. Isn’t a similar treachery reported in the Torah? Ten Israelite spies present Moses with a negatively slanted report about Canaan – even when they know their exaggeration may spell the end of the Israelites as a nation.

What I can conclude is that Nolan Gurfinkiel, eighteen at the end of the war, “bitter and totally engrossed with hate,” wrote an extraordinary memoir about his wartime survival. Not one word comes close to exaggeration:

“The screams of terror! The carnage all around! My people’s blood drenched the ground!”

I can only apologize belatedly to Nolan for having been a fool. I hope “Prisoner 69145” one day gets the respectful publication it deserves.

Barbara Finkelstein is writing a book about mental illness and housing in the Bronx. Publishers interested in publishing “Prisoner 69145” may contact her through Rukhl Schaechter-Ejdelman, schaechter@yiddish.forward.com, at the Forverts.