How Trump’s Muslim Ban Is Being Translated Into Other Languages 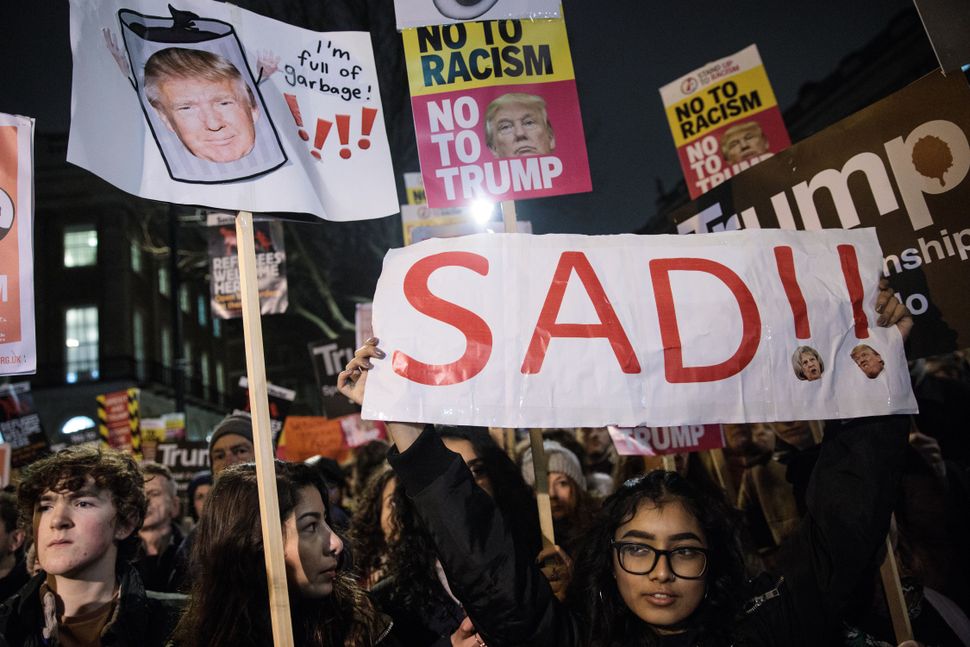 The Trump administration’s ban on Muslims from seven nations entering the country has caused mass protests at airports worldwide — but how it is being reported globally is often a matter of translation.

In Italy, “they are calling it a “legge razziale” or racial law, which directly ties it to the Italian racial laws instituted against Jews and undesirable other groups under fascism in the late 30s,” said Italian translator Jamie Richards.

“Besides that it seems like there’s some underreporting leading to not realizing just how many people it affects and a related confusion about what a green card is and what rights it confers,” Richards added.

Richards just completed translating Adua by Igiaba Scego, to be published by New Vessel Press in April. Scego is a Somali-Italian author who was supposed to travel to the U.S. to promote the book but may not be able to now.

Some translators are using punctuation to indicate that the phrase is problematic and not entirely clear.

“One thing I have myself been wondering about both in English and in Finnish translation is the word “Muslim ban” itself,” Peltnonen said. “It is obvious that the travel ban was directed against Muslims, but then again, it did not include many important Muslim countries.”

“Although I’d hate to water down the obvious racism inherent in the ban, I myself prefer to put ‘Muslim ban’ in quotation marks just to give the reader a hint about the complexity and confusing-ness of the whole thing,” Peltnonen explained.

Meanwhile, translating Trump continues to be a minefield for translators, who risk getting blamed for Trump statements that make no sense.

“Trump can totally ruin the reputation of a good translator, because he keeps contradicting himself within the briefest periods of time, which makes the audience think: “What kind of nonsense is that translator saying?” Norbert Heikamp, who is tasked with simultaneous interpretation of Trump for German media, told Der Spiegel. (Heikamp’s statements were translated for The Forward by Shelley Frisch.)

“The things Trump says are also diametrically opposed to what is said by the cabinet members he has selected, and he jumps from one topic to another,” Heikamp said.

“First he rants about murderers in the pharmaceutical industry, then moves along seamlessly to free trade,” Heikamp added. “He is totally spontaneously associative, utterly unpredictable. You have to watch your step like crazy when you’re translating.”

Meanwhile, some protesters are using one untranslated word to express their views of the situation. The Biblical Hebrew word for justice — tzedek — appeared on a purple sign at a Seattle protest, and a photo of the protester holding it up on this past Shabbat was widely circulated on social media.

But some of the most powerful symbolism of the past few days was non-verbal: the Havdalah candle held up at JFK airport. The candle is used to mark the end of the Sabbath and the beginning of the work week, and is said with a prayer dividing the light from the darkness, and Israel from the rest of the nations.

The translation of that candle?

The protester holding it up does not want any one religion divided from the rest when it comes to seeking sanctuary, and the protester was clearly willing to violate Shabbat to defend Muslims trying to enter the U.S.

The rationale used by observant Jews is that Saturday’s events involved pikuach nefesh, or danger to life itself — which supersedes the Sabbath, one of the Bible’s primary commandments. But only someone familiar with Jewish life and law would recognize how that candle wordlessly translated it all.

Aviya Kushner is the Forward’s language columnist. She is the author of “The Grammar of God” (Spiegel & Grau, 2015). Follow her on Twitter, @aviyakushner

How Trump’s Muslim Ban Is Being Translated Into Other Languages