Spicer Continues The White House’s Disgraceful Line On The Holocaust 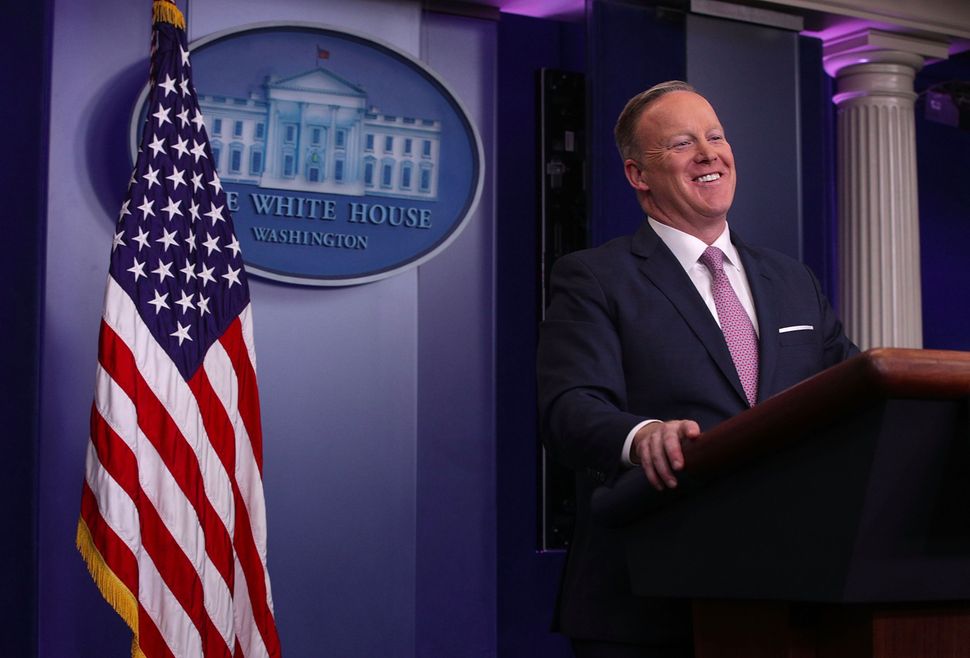 It should come as no surprise that “I’m sorry” does not seem to be in the current administration’s vocabulary. Following the widespread backlash against Donald Trump’s disgraceful Holocaust Memorial Day statement (you can read my piece on all the statement’s problems here), White House Secretary Sean Spicer doubled down on the statement in a press conference on January 30th.

In response to a question regarding the President of the Zionist Organization of America’s criticism of Trump’s statement, Spicer said of Trump, “I think he’s aware of what people have been saying but by and large he’s been praised for it.” After this initial falsehood (hell, not even Fox News or Breitbart praised the statement), Spicer immediately transitioned into talk about how Trump will be a great friend to Israel. Here we see Spicer pull out one of the oldest lines in the anti-Semitic playbook – “some of my best friends are Jewish…” By defending Trump’s statement on the grounds of his (self asserted) pro-Israel credentials, Spicer sends the following message to Jewish critics of the Trump regime – “fall in line, you owe us.”

Spicer also makes a dangerous conflation: Jews = Holocaust, that is, Spicer’s statements suggest that the Holocaust is a specifically Jewish issue. To be certain, the perpetration of the Holocaust was a Jewish issue, it was a crime specifically targeted at Jews, and if it is to be properly remembered, it must be remembered as an event that that specifically targeted the Jews above all other groups. That being said, Holocaust denial (or in Trump’s case, Holocaust denial light), is a danger to society as a whole, not just the Jewish people. The Holocaust was a crime against humanity, which, quoting Hannah Arendt, is a “crime agains the human status,” a crime that fundamentally changes the very nature of humanity. The Holocaust was primarily a crime against the Jews, yes, but it is also stain on all human society. To forget this fact, or to assert that the Holocaust is only a Jewish issue, is to forget what made it such a terrible, world-shattering event in the first place – it revealed the extent, depth, and persistence of the human capacity for evil. Any regime infected by the cancer of Holocaust denial (be it subtle or overt) is a regime that has lost its moral compass, a regime unwilling to engage in self-reflection, a regime that has learned nothing from history (or perhaps, it has learned its lessons all too well, hence the denial).

This is all bad enough, but Spicer did not stop there. “The President went out of his way to recognize the Holocaust,” he said, with a revolting self-righteousness, as if issuing a statement on Holocaust Memorial Day is a burden, something out of the norm, something that shouldn’t be expected from every half-way decent leader around the world. As if, with his putrid 117 word statement, Trump had done a favor (a quite irksome one) to the Jewish people.

Spicer’s last point (before repeating the Holocaust-Jew-Israel conflation) was to say that Trump’s statement was intended to “make sure that America never forgets what so many people went through, whether they were Jews, or Gypsies, gays, disability, I mean priests…” Even with a charitable understanding of his statement, the best we can say is the following: Trump did not forget the suffering of “innocent people” during World War Two, but it is clear that he and his lackeys Spicer and Priebus, have forgotten the Holocaust.

Spicer Continues The White House’s Disgraceful Line On The Holocaust