Should We Forget The Holocaust? A New Play Says Yes — And No 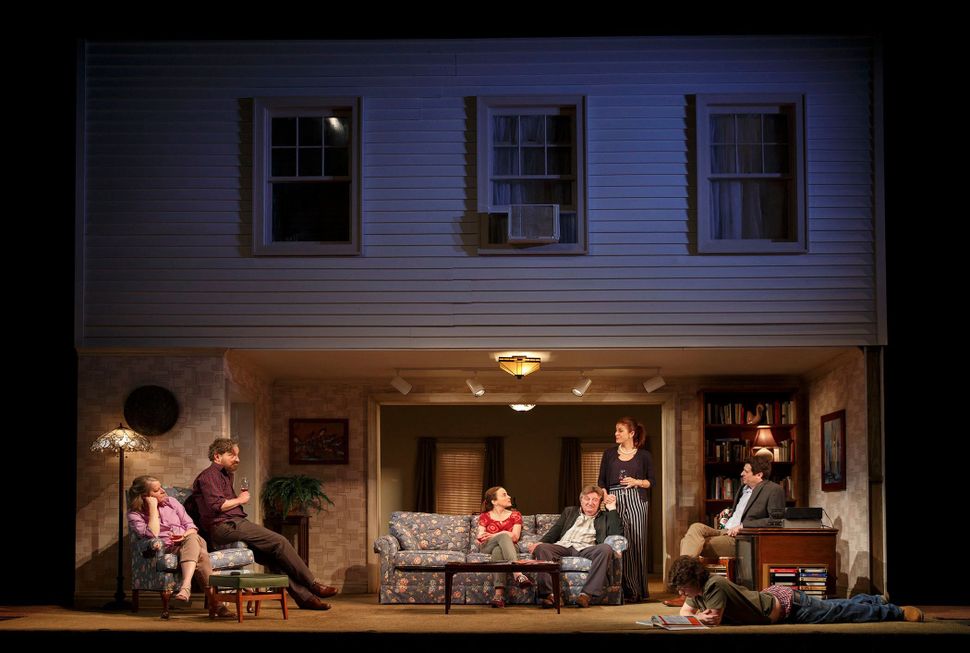 “If I Forget,” currently running at Manhattan’s Laura Pels Theatre, opens with two parents anxiously discussing their daughter, who is away on a Birthright trip to Israel. The 2000 Camp David Summit between Israeli Prime Minister Ehud Barak, Palestinian leader Yasser Arafat, and President Bill Clinton has just failed – “The peace process is over,” fumes Michael, the father – and they’re worried over whether or not she’s safe.

Michael may be worried, too, about whether the trip is a good idea, spiritually and culturally. An avowed secularist who also happens to be a professor of Jewish studies, he’s about to publish a book offering some contentious claims about the continuing impact of the Holocaust on Jewish identity. 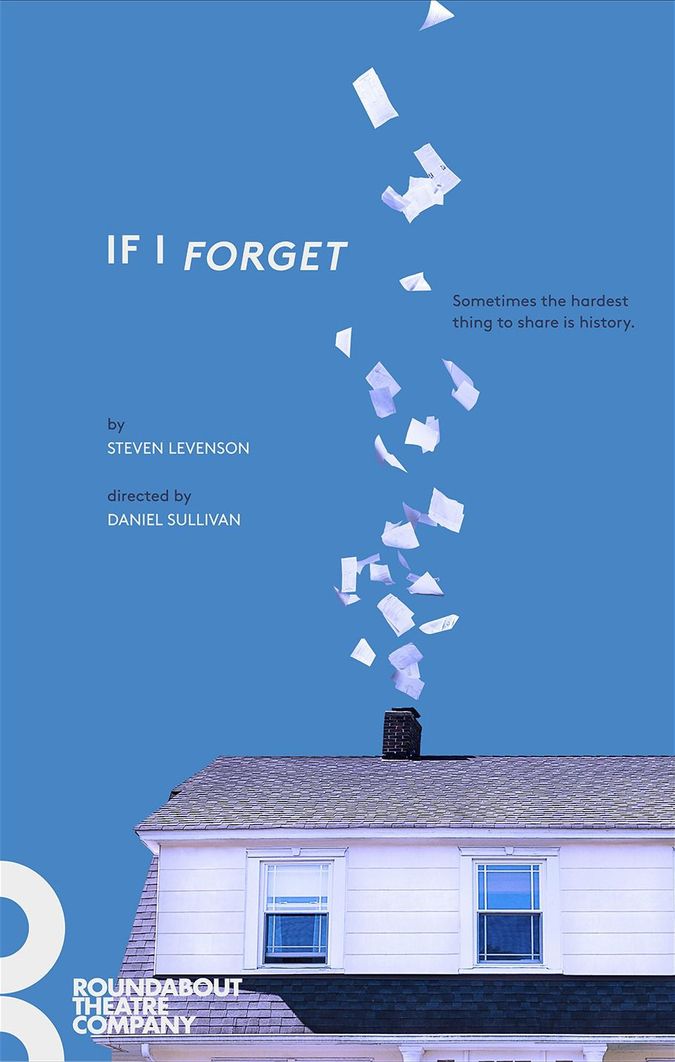 Heritage is clearly problematic as Michael and Ellen join the rest of his family, the Fischers, to celebrate his father Lou’s 75th birthday. As soon as the family – which includes Michael’s younger sister Sharon, older sister Holly, and Holly’s husband and son – gathers around the kitchen table, debate over that family’s personal heritage, as well as their seemingly inseparable heritage as Jews, reigns supreme.

Igniting that debate is that pesky book of Michael’s, a manuscript of which is making the family rounds. Arguments over Israel and the continued relevance of the Holocaust overwhelm conversation, which happens to be exactly Michael’s point. The family is split: Do those two pillars of identity exert dangerous sway over the Jewish American imagination, or are they necessary forces in shaping a Jewish future?

There is an artistically fruitful truth to the idea that contemporary American Jews find themselves boxed in, culturally, by the history of the Holocaust and political strife over the state of Israel. That idea carries with it potent questions of ethics and identity: What are the consequences of defining our present as a people – and to a good extent, our future – between those two poles? Does the ill that has been done to us justify the doing ill others? Why do we disagree over whether the Israeli occupation of the Palestinian territories qualifies as an “ill?” At what point will our shared memory fail to advance us as a people? Are we already there?

“If I Forget” makes promising moves towards exploring those questions – mostly through grand speeches delivered by male characters – but ultimately shies away from that endeavor. Its characters, facing a moral morass on a broad cultural scale, scurry to the relative safety of interpersonal conflicts. Michael is an atheist critical of contemporary Jewish identity; Sharon subscribes to that identity completely, perhaps, Maria Dizzia’s slyly self-conscious performance suggests, because every other personal identity she’s tried on has rapidly turned toxic. Many of the scenes in which the family confronts serious ideological questions end with those two characters physically backed into separate corners, hurling recriminations.

Is this a bad representation of a family dynamic? Well, no; for many, it’s likely strikingly accurate. Does it make for bad theater? Again, no. “If I Forget” somewhat defrauds itself by bestowing a few more crises on the Fischer clan than seem entirely believable, but the relationships within that clan mostly ring true.

Is it possible that “If I Forget” is better theater for showing intelligent people shirking big questions in favor of the sort of personal pettiness that often, inevitably, feels more urgent and encompassing? After all, watching that kind of behavior unfold in claustrophobic quarters can force an audience to consider how frequently they pass over questions of intimidating depth and breadth – and the work required to answer them meaningfully, and even harder, actionably – in order to, often uselessly, scratch a personal ideological itch.

Too bad: “If I Forget” is too enchanted with the Fischers’s unique malfunctions, too pat and predictable to be entirely engaging, to fully deliver that message. More importantly, in a stylistically ambitious but ultimately hollow final set piece, the play reveals itself to be sure that it has, in fact, probed the deep questions, unwittingly playing into the paradigm that it half-attempts to undermine. Playwright Steven Levenson might want his audience to question their relationship to the great movements of the world, but he lets his characters get away with acknowledging that their priorities could use some work, and leaving it at that.

“If I Forget” is also a bit too behind the current moment, in terms of its societal interests, to be revelatory to a contemporary audience. Its female characters are unilaterally less fully developed than its male ones, and have been molded as unfortunate stereotypes. The older women are low earners, blissfully unconcerned with their finances; of the younger ones, who never appear but are often mentioned, one suffers from fragile mental health and one is an aspiring young actress whose tuition, apartment, and spending money are provided for by her skeptical but indulgent parents. Sure, these are all real characters somewhere, but put together they form a portrait of womanhood that feels simplistic and regressive.

More importantly, while the play treats the economic concerns of its characters as crippling, and they are indubitably constricting, it’s hard not to note that the family concerned is, in the American landscape, relatively well-off. Lou owns a nice house in Washington D.C., plus a store in the city occupying potentially lucrative property; Holly’s husband Howard is a wealthy lawyer; Michael is an academic paying off a pad in soon-to-be-hip Park Slope. When hard decisions must be made, the family has access to emotionally painful but otherwise perfectly acceptable means of relief.

As a foil, Levenson has given them – sort of – the Jimenez family, who lease Lou’s store. We never meet them, but we’re given to understand they’re substantially less financially secure than the Fischers. They pay below-market rent for the space, partially, we’re made to understand, because they can’t afford more.

A play about how the Jimenez family would handle the sort of emotionally wrenching financial decision-making that comes later in life might be fresher and more urgent than “If I Forget.” (Plays that plumb the social and economic unease of America’s white middle class are, after all, not exactly lacking in 21st-century drama.) As it is, no member of that family ever appears onstage; they end up serving as a weak outlet for the Fischers’s race- and class-based guilt, without demanding the Fischers address that guilt in a meaningful way.

(A note: Telling a good story onstage isn’t and shouldn’t be a matter of political correctness, but it’s reasonable to believe any play that takes economic strife and/or social responsibility as its subject, as “If I Forget” does, has some responsibility to consider its own role in that landscape. Call it the “La La Land” effect.)

The two sides of “If I Forget” – that concerned with existential threats to the moral and cultural state of American Jewry, and that concerned with very real threats to the ability of the Fischers to sustain themselves – suffer from the same weakness. Both aspire to reach the tough nut at the center of a great problem and crack it. Both find that nut, give it a few taps, then tire of the effort.

It’s a curious example of a confluence in form and subject. In the play, Levenson tries to crack a series of artistic tropes in hopes of revealing some fresh moral angle. But just like his characters, he can’t quite bear the prospect of what might be within.

“If I Forget,” produced by Roundabout Theatre Company, runs at the Laura Pels Theatre through April 30, 2017.

Should We Forget The Holocaust? A New Play Says Yes — And No