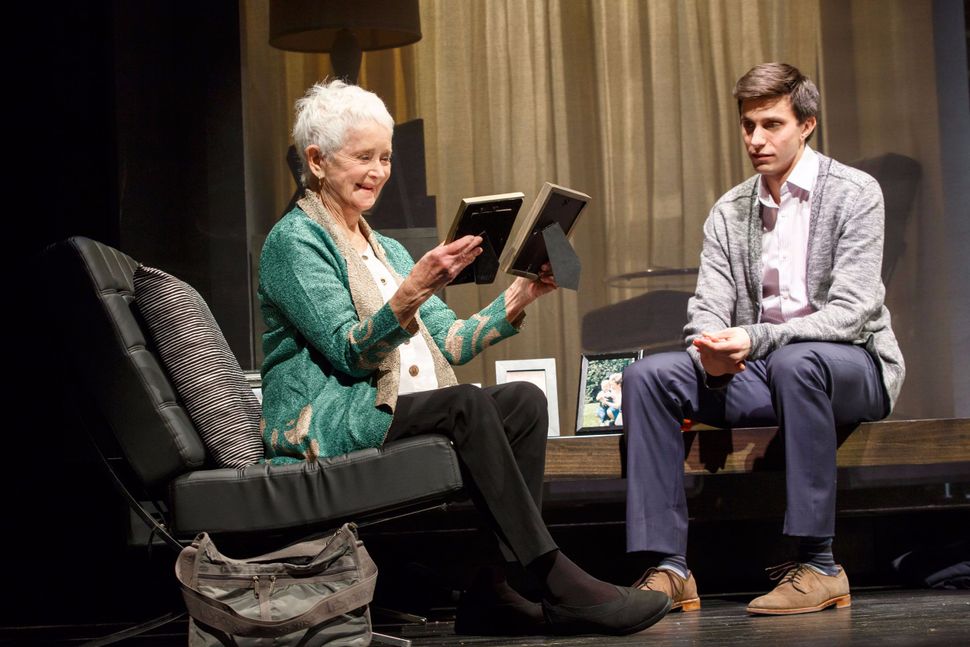 “You just have to meet your bashert,” says grandma, sagely. Jordan, her late-20s grandson, is despairing that his friends are all getting married and he’s still alone. “And you will,” grandma continues, “because you’re the most wonderful grandson in the world.”

Jordan is sad, but he’s also smart and a smartass. “I don’t think that’s how it works,” he shoots back. “I don’t think just ‘cause your grandma loves you means you meet someone special.” He fidgets. “No offense.”

Jordan is at the center of “Significant Other,” the excellent bittersweet comedy by Joshua Harmon that opened tonight at the Booth Theatre on Broadway, after an off-Broadway run at the Roundabout Theater Company two summers ago. Harmon’s previous play, “Bad Jews,” was a hilarious, vicious chamber piece on the future of American Judaism. “Significant Other” is less specifically Jewish, less angry, less unusual, and also deeply, sweetly moving. It’s a wise, funny meditation on the difficulties of growing up and finding someone.

Jordan is gay, and his three best friends, all college buddies, are women. They’re an inseparable foursome — except that one by one the women are meeting men and marrying off. Jordan finds himself increasingly brushed off, increasingly unmoored, increasingly lonely. Two years ago, I found the play charming but a little bit facile, an out-of-date portrayal of the challenges of being a young, gay New Yorker. (Stop hanging out with your hags all the time! Go meet some gays!) This time around — and with an essentially unchanged script — I found Jordan’s gayness nearly irrelevant, and thus his story, simply about loneliness, much more honest.

Credit for that goes, I think, to Gideon Glick, who plays Jordan, and played him last time around, too. (Nearly all of the excellent cast repeats their roles, with the exception of one of the girlfriends. Trip Cullman directs again, too, with crisp tonal shifts from comedy to desperation.) Under Cullman’s guidance, Glick has dug deep into the role — he’s nebbishly, winsomely charming, but he also conveys such a profound current of visceral unhappiness, of seemingly intractable loneliness, that the play takes on an added depth. If Jordan is glibly unhappy, miffed about losing his gals, the play can read as trite. But when he’s so miserable, it’s a universal study of loneliness.

“Significant Other” begins at a bachelorette party for Jordan’s friend Kiki (Sas Goldberg), a brassy loudmouth (Jewish, natch), where everybody — Jordan, Kiki, the tough and dirty Vanessa (Rebecca Naomi Jones), and the one Jordan is closest to, Laura (a wonderfully sensitive Lindsay Mendez) — is drunk and dancing and happy. Soon enough, though, Jordan and Laura are fantasizing about what great if non-romantic partners they’d make for each other, which reminds Jordan that he doesn’t have anyone.

But there’s the slightest possibility of maybe someone, a new gay at work named Will. (John Behlmann plays the quiet, studly Will, and also Kiki’s dim husband and eventually Lindsay’s sweet one, each with a amusingly distinct mien. Luke Smith plays another trio of men.) Much of the first act is devoted to Jordan’s obsession with Will, of course unrequited. Jordan is an obsessive sort, and that’s what leads to the play’s funniest moments: his granular description of watching Will get out of an office-party swimming pool, his internal debate as he considers sending Will an ill-advised email. These riffs could be easy, campy shtick, but Glick’s performance grounds it all in something real. It reminds you of the exquisite agony of a deeply felt crush, multiplied by the uniquely gay challenge of never being sure whether an excursion with a new acquaintance is a friendly meeting or a date.

By the second act, all three of his girlfriends are spoken for, and Jordan’s desperate loneliness amps up. He’s turning more to his grandmother (Barbara Barrie) for solace. This is when he turns unlikeable, and when the play becomes least convincing. People grow up, and people find partners, and Jordan’s screed at Laura that it’s a lie that he’s her best friend — obviously Tony, her eventual husband is — is not so much charmingly lonely but unfair and selfish. It’s also when his character risks becoming a caricature of the gay friend: great with the girls, with no friends of his own, and sexless. (And weirdly dedicated to his grandmother.)

But Glick’s performance, and Mendez’s, power through that. All of Jordan’s anxiety manifests when Laura, the one he was closest with, the one he lived with, the one with whom he fantasized about a wedding and adopted children, is set to marry Tony. The chemistry and charisma of the two actors, and Glick’s intensity, make their fighting and reconciliation — at her wedding, natch — genuine, pained, and wrenching.

Harmon’s final playwriting grace note is that “Significant Other” doesn’t have an easy ending. Jordan doesn’t meet anyone. The girls are all married off, and he’s still alone. But, somehow, it’s also clear that he’ll get by, that one day he’ll find his bashert. You’ll forgive a theatergoer for getting a little verklempt.

Jesse Oxfeld has written about theater for New York Magazine and The Observer. Follow him on Twitter, @jesseoxfeld