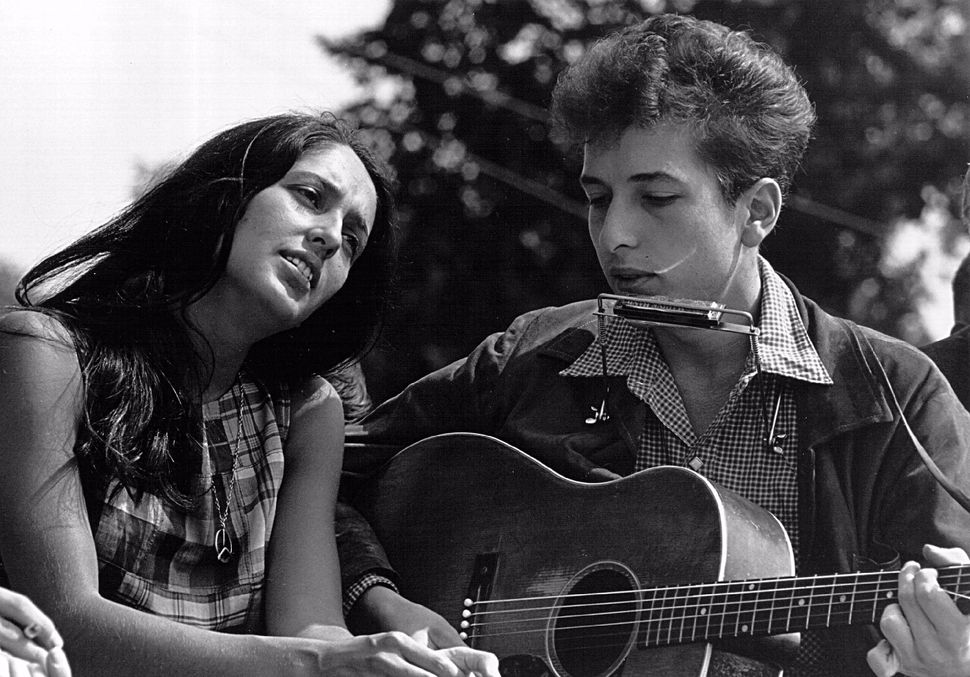 Pardon us for not losing our minds with excitement over Bob Dylan’s much-praised new recording of Hoagy Carmichael’s “Stardust,” which was released late last week as a preview of Triplicate, his three-album set of American standards that’s due out at the end of March.

Sure, Dylan has long earned the right to do whatever the hell he wants in a recording studio, whether it’s digging into the great American songbook or laying armpit farts over brutal dubstep drops. And as anyone who ever listened to “Theme Time Radio Hour” — the Mighty Zimm’s much-missed satellite radio show — can tell you, his knowledge of (and affection for) pre-rock and roll classics runs deep. But while his country-tinged arrangement of “Stardust” is tasteful and charming enough, his voice and phrasing simply aren’t up to the task; the bum notes and mumbled lyrics make the whole thing sound like somebody’s grandfather singing to himself in the shower.

To be fair, “Stardust” is an incredibly difficult song to pull off, thanks in part to Carmichael’s wistful, meandering melody — which was written in 1927 and reportedly inspired by the solo improvisations of legendary jazz cornetist Bix Beiderbecke — and its unconventional ABAC structure. And two years after Carmichael wrote the music, lyricist Mitchell Parish (born Michael Hyman Pashelinsky to a Jewish family in Lithuania) added another layer of complexity to the song, penning such evocative but unwieldy mouthfuls as “The nightingale tells his fairytale/Of paradise where roses bloom.”

But just as Mount Everest continues to tempt expert climbers, “Stardust” has a combination of otherworldly beauty and technical challenge that has made it incredibly alluring to generation after generation of musicians and vocalists. While we don’t have the time or space to rank the over 1,500 renditions of “Stardust” that have been recorded, here’s a list of fifty that climb to significantly higher elevations than Dylan’s version — and, just so we don’t completely pile on the poor guy, we’ve picked out another three that barely make it out of base camp.

It’s impossible to pick the “best” version of “Stardust” — but this sublime Coltrane recording from 1958 certainly has to be in the running.

“Stardust” looms large in the Sinatra legend — it was the first song he ever sang with Harry James’ orchestra, and he would record it several times over the course of his storied career. But this version, recorded in 1940, may have been his finest.

3. Louis Armstrong and His Orchestra

Though this 1931 recording largely serves as a showcase for Armstrong’s brilliant trumpet playing, Pops also recites Parish’s lyrics with a conversational ease that still astounds.

One of the most iconic vocal performances of the song, Willie’s 1978 version of “Stardust” proved to the world that he was far more than just an outlaw country singer.

6. Billy Ward and His Dominoes

A Top Ten pop hit in 1957, the Dominoes’ swoon-worthy version is best known these days for its appearance in Martin Scorsese’s 1990 gangster film, “Goodfellas.”

Vaughan comes out swinging in several senses of the term on this 1958 recording with the Count Basie Orchestra, treating the listener to a verse of stunning vocalese before she even gets to the lyrics. The way she works the melody will definitely haunt your reverie.

Though it mysteriously rose no higher than #29 on the US pop charts in 1957, Cole’s heavenly recording has more than stood the test of time — and has been used to excellent effect in the films “My Favorite Year” and “Sleepless in Seattle.” (His daughter, Natalie, would later record a fine rendition of her own.

9. Isham Jones and His Orchestra

A number one hit in 1931, Jones’ recording was the first to reframe “Stardust” as a sentimental ballad — an approach that most artists would subsequently adopt.

This gorgeous 1954 recording features Ella in her prime, accompanied to perfection by Larkins’ piano.

Backed by a magnificently lush arrangement courtesy of Gene Page, Mathis offers up the definitive “smooth 70s” version of the song on this 1976 recording.

Alto saxman Paul Desmond spirals off into the stratosphere — then returns gently to earth — on this entrancing live recording from 1953.

The “Velvet Fog” won a Best Jazz Vocal Performance Grammy for his work on his and Shearing’s 1983 album, Top Drawer; this cut from the LP is certainly award-worthy in itself.

Brown was only 24 when he closed his 1955 album Clifford Brown with Strings with this haunting trumpet solo — and the fact that he died little more than a year later only lends his performance additional emotional resonance.

Hampton and Peterson take it slow and smooth on this ten-minute performance from 1953, their notes twinkling like the stars suspended above them.

Peterson was obviously loved to play “Stardust” — recorded a year before his version of the song with Hampton, his take with Young is just as good, albeit with a more aching feel to it.

A pioneer of the double bass as a solo instrument, Pettiford struts his stuff on this track from his 1955 album, Another One, digging deep into the song’s melody (and then some) with only chordal support from pianist Don Abney.

An R&B superstar of the late 50s and early 60s, Wilson brought the same pugilistic intensity to his cover of “Stardust” as he did to hits like “Lonely Teardrops” and “Baby Workout.” His approach to this 1965 recording may be too brash for some, but there’s no denying the man’s ability or commitment.

With its winding, sliding melody, “Stardust” makes an excellent fit for the trombone, as Bennie Green’s greasy solo on this 1953 recording proves.

Neville and Wasserman teamed up for the soundtrack of 1988’s Rain Man, crafting a unique arrangement wherein Wasserman’s upright bass anchors the music and an angelic choir of overdubbed Nevilles soars off to the heavens.

A rare bossa-nova arrangement of the song, given an additionally “exotic” feel with kitschy, quasi-Asian instrumentation — an odd combination, perhaps, but this 1963 track sounds especially good with a Mai-Tai in your hand.

A meditative 1961 version from the Babe Ruth of the Hammond B-3.

No Hoagy-fest is complete without a version of “Stardust” by the man himself — and this 1942 vocal version (with added bonus whistling) is probably his best.

The “Queen of the Blues” gives the song a nicely dramatic reading on her 1961 album, For Lonely Lovers.

A lovely reading recorded in Paris in 1935, which also includes a nifty guitar solo from the great Django Reinhardt.

Nelson Riddle teed up this dynamic arrangement for Smith, who knocked it out of the park on her 1959 album Swingin’ Pretty.

In case you were wondering “Stardust” sounds just as lovely in French — or at least it does on this dreamy 1938 recording.

An appropriately full-throated 1950 rendition from Eckstine, one of the most powerful male vocalists of his era.

Not only is Terry’s fleugelhorn solo in this 1967 TV performance a thing of sheer beauty, but its contrast with Bob Cranshaw’s bowed bass is positively goosebump-raising.

Irving Mills was the co-owner of Mills Music, the company that published “Stardust.” This 1929 version, one of the earliest recordings of the song, was significantly more upbeat than most of the post-Isham Jones renditions would be.

A gorgeously fluid 2004 reading from the legendary Brazilian performer.

The “Godfather of Exotica,” Pandit (born John Roland Redd) was a fixture on West Coast television in the 1950s and 60s, keeping viewers entranced with atmospheric organ and piano arrangements of classic songs. This 1952 recording offers ample evidence of his hypnotic charms.

Best known in the U.S. for their appearances in classic Toho monster flicks like Mothra and Ghidorah, the Three-Headed Monster, twin sisters Emi and Yumi Itó enjoyed a lengthy recording career in Japan, which included a lounge-worthy take of “Stardust” that could have charmed any fire-breathing beast.

The Hawaii-based bandleader never met a standard that he couldn’t dress up in “exotic” instrumentation, but he does so quite tastefully (and gorgeously) on this 1959 recording.

Recorded in 1931, the same year as his massive hits “Minnie the Moocher” and “Saint James Infirmary,” Calloway’s yearning version of “Stardust” somehow missed charts entirely despite its obvious excellence.

This long-running Los Angeles R&B vocal group made a detour into the world of pop standards for their 1966 album, Misty. Though the group was reportedly unhappy about going in this more conservative direction, their version of “Stardust” was pretty impressive on its own terms.

Featuring an arrangement by Paul McCartney, “Stardust” was one of the highlights of Ringo’s first solo album. Whatever Ringo lacked in vocal prowess, he more than made up for with his sincere enthusiasm and a drummer’s flair for rhythmic phrasing.

Best-known for their 1963 hit version of the 30s standard “Deep Purple,” this brother-sister duo took a similar approach to Carmichael’s tune, updating it with the sort of harmonica-driven folk-rock groove that kids of the early 60s could dig.

Okay, so Barry was never the hippest guy in the room. But the man sure knows his way around a standard, as evidenced by this 1987 recording with “lite-jazz” quartet Uncle Festive.

The product of a highly musical family, D’Angelo initially pursued a career as a singer before going into acting — and her rendition of “Stardust” from Neil Jordan’s 1991 film The Miracle offered ample evidence of her vocal talents.

A musical prodigy, Derringer made his TV debut in 1955 at the age of ten, and recorded this creepy-sounding Wurlitzer organ arrangement of “Stardust” the following year.

In 1971, this Philly female trio waxed a dramatic arrangement of the tune that wouldn’t have been out of place on a Las Vegas stage — though the crickets and croaking bullfrogs during the opening verse were an especially inspired touch.

A loping ska groove might not seem like a good fit with Carmichael’s melody, but veteran Jamaican trombonist Rodriguez made it work on this jaunty cut from his 1997 album, Rico’s Message.

Rod the Mod acquitted himself surprisingly well on the title track from his 2004 album, Stardust: The Great America Songbook, Volume III, once and for all refuting the rumor that he once had to have a gallon of stardust pumped from his stomach.

Canadian crooner Bublé has recorded several versions of the classic, but his 2009 version — an a capella arrangement assisted by NYC vocal group Naturally 7 — is by far his most interesting.

And here are three we never need to hear again:

Der Bingle recorded a beautiful rendition of “Stardust” in 1939, but his first pass at the tune from eight years earlier is a decidedly awkward-sounding affair; not only does his voice sound hoarse, but his Al Jolson-influenced vocal flourishes have not aged particularly well.

You’ve got to know when to hold ‘em and when to fold ‘em, but the Gambler failed to take his own advice on this snoozy version, which finds him sleepwalking through a sea of studio mush.

A longtime fixture on the Pittsburgh music scene as the leader of the Folk Pistols, Frenchy misfires here, plodding along and falling short of several crucial notes. This is one burrito you’ll wish you hadn’t ordered.

Dan Epstein is the author of, most recently, “Stars and Strikes: Baseball and America in the Bicentennial Summer of ’76.” Follow him @BigHairPlasGras