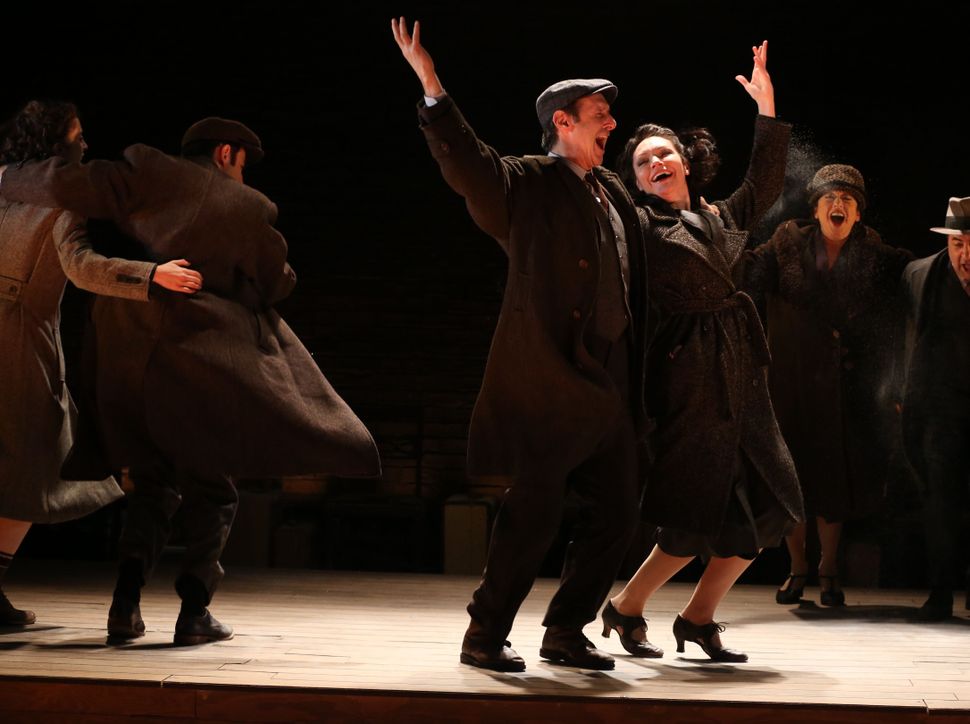 On a Manhattan Monday, in an airy rehearsal studio far enough west of Times Square to make a grumbling city-dweller breathe with freedom, a group of journalists greeted each other forlornly.

“There’s no food,” one photographer grumbled to another, affixing various implements to his camera. To his left, a journalist clutching a notepad and elderly iPhone shot an anxious glance at her own equipment, humble and uncool.

Another among the shuffling crowd wondered who had seen Broadway’s “The Price,” and what they had thought. Everyone, the answer seemed to be – aside from she of the wheezing iPhone –and most had thought it was funnier than they expected, or frankly, Arthur Miller had intended.

Earlier, in a larger rehearsal room down the hall, director Rebecca Taichman had given a rousing speech to the cast and crew of Paula Vogel’s “Indecent,” which was in the middle of its first rehearsal for its upcoming Broadway run. She saw the play’s climactic scene, she said, almost as “a moment that persists through time,” eternally occurring, only waiting for the right sets of hands to draw back the curtains and reveal it.

When Taichman strode into the press room, Vogel by her side, and shutters clicked, and a few bashful smartphones and tablets were raised, she must have imagined herself in another eternal tableau – this one, perhaps, a bit less inspiring. Shouts of “over here!” echoed, and the duo calmly turned their heads.

Still, if a photo op can involve a sense of joy, this one certainly qualified. After all, as Taichman smilingly told the assembled, “Indecent” is a play about a “little unlikely, little Jewish play that had this enormous impact.” How astonishing, that another unlikely Jewish play, perhaps slightly less little, was preparing itself to follow a similarly un-hoped for path to fame.

The cast, also rarely exuberant, was ushered in, and despite the journalists’ continued mutterings – “you got home safe after all those martinis?” one inquired; “Manhattans,” his companion corrected – the room contained too much excitement for the session to be one of repetitive disinterest.

“Are you having fun now?” a photographer inquired, aiming her lens at the congregated cast and creatives.

“Right now,” actor Max Gordon Moore responded, the hint of sarcasm in his voice belied by a twinkle in his eye. Actress Mimi Leiber, posing for a solo shot, lifted her chin authoritatively. After a brief pause, with a twitch at the corner of her mouth, she continued lifting it until she stared directly at the ceiling. When her gaze turned once again earth-ward, her expression was one of positive glee.

Lack of food aside, surely some of the journalists wondered if this particular routine opportunity might be, as in Taichman’s vision, eternal, to be revisited now and then for a dose of genuine theatrical thrill. Danishes, after all, are easily procured; happiness is a resource in somewhat shorter supply.

Taichman indicated that she, too might come to remember the morning with a certain undue fondness. “I’m in denial about any anxiety. I’m just, really, I’m pretty full of hope and excitement and faith,” she told the journalist with the iPhone, her words registering in jagged sound waves on that decrepit device’s screen.

And in fact, Taichman declared, the play itself is a recollection of an un-mourned golden age, at least linguistically

“There’s never really been, at least in my experience, a public kaddish for the Yiddish language,” she said, “and so at the center of the play is at once a profound and beautiful and inspiring love story and also a real mourner’s prayer for the loss of a language.”

Vogel proposed a vision of the play as making a vibrant stand in favor of the possibility of ingenious beauty in all ages: Past, present, future.

The journalist reflected on the hours past, a rarely warm and easy entry to the week’s work. Then she bundled on her largest coat and headed out into the city, where predictions of a blizzard were provoking a premature sprinkling of salt on sidewalks. And so the warmth she felt grew greater, fueled, unlikely and defiant, by the prospect of a storm.