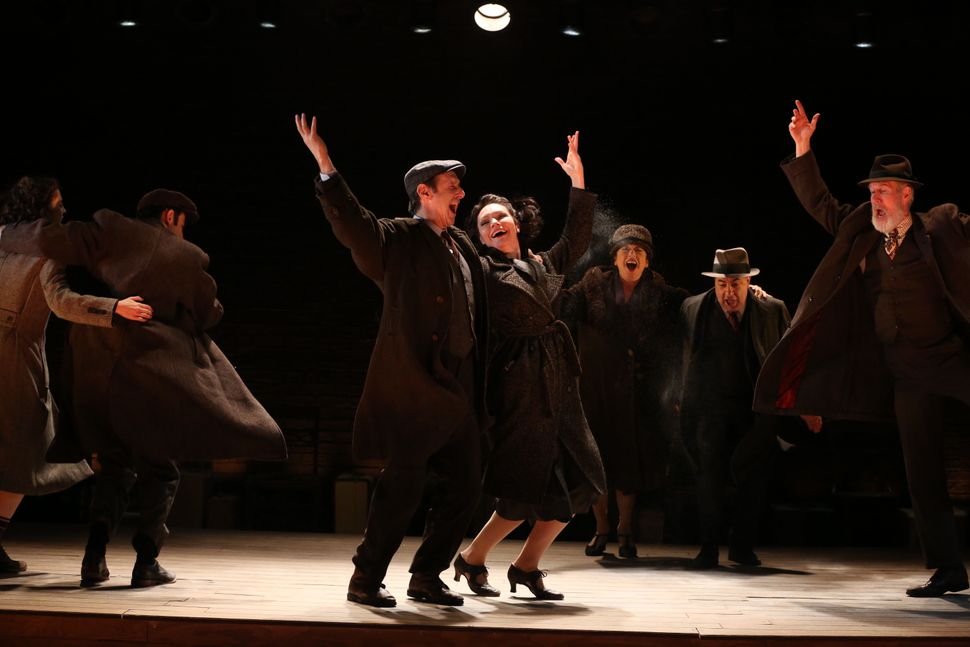 Indecent at the Vineyard Theatre Image by Carol Rosegg

The opening of “Indecent,” a new play by Paula Vogel co-created with director Rebecca Taichman, is reminiscent of the scene in “Inception” in which Leonardo DiCaprio takes Ellen Page through the basics of dream architecture. He escorts her through an initially recognizable world that begins inverting and contorting itself, resulting in a dreamscape created less through a distortion of reality than a shift in perspective. The facts of the world are the same, but the way in which the viewer sees them has been meaningfully altered.

As audiences enter the Vineyard Theatre for “Indecent,” the play’s cast sits at the back of the stage in near-darkness. “Indecent – the True Story of a Little Jewish Play” is projected on the back wall in English and Yiddish. The solemn actors and sparse set — just the chairs occupied by the actors and a raised platform, a stage-upon-a-stage — clash with the bright rows of light bulbs that frame the whole tableau, putting forward a clear proclamation: look — look! — it’s show business.

That asymmetry between the grinding, bleached-perfect business of theater and its serious, lyrical heart provides one of the primary tensions in “Indecent,” which tells the half-fictionalized, half-true story of Sholem Asch’s 1907 play “God of Vengeance.” Vogel and Taichman’s allegiance becomes clear in the play’s opening moments, in which onstage musicians — clarinet, violin, accordion – begin to play, and the cast slides into a dance — “this sort of gestural theory,” Taichman explained in a phone interview, “very Yiddish, very clown, oddly beautiful” — dust cascading from their sleeves. One steps forward, introducing first himself as Lemml, the stage manager (a loving nod to Thornton Wilder’s “Our Town”), then the others, describing the kinds of characters they’ll play, since each actor occupies several roles. A kind of ecstatic, otherworldly onstage celebration ensues. The actors introduced as “the ingénues” kiss passionately; the clarinetist and violinist embrace, delicately playing their instruments by reaching around each other’s bodies.

This is not the gilded, noisy show the lights suggest. Instead, it’s a deep, humble love letter to theater at its most touching and romantic, an art so powerful it can employ only a few actors on the barest stage — or a few curmudgeonly authors, reading a script in a living room — to affect the same kind of world-bending revelation that “Inception” did for a few casual millions.

The beating heart of “Indecent” is “God of Vengeance,” more famous for its scandalous history than its beauty. It was an unlikely early career product for the Polish Jewish Asch, a tale set in a brothel that found its emotional heart in a lesbian relationship. (“It has the audacity of a youthful creative mind,” Taichman said.) Despite the play’s unorthodox material it was a hit in Yiddish theaters first in Eastern Europe, then in New York. Its first English run off Broadway was successful enough to earn it a short-lived showing on Broadway. On that run’s opening night in 1923, the entire cast was arrested on charges of obscenity, which were successfully prosecuted – there you have it, the spiritual and artistic narrow-mindedness of mainstream theater – in the evocatively-titled trial, “The People Vs. The God of Vengeance.”

Taichman first read the play while pursuing a graduate degree at the Yale School of Drama. “It took my breath away,” she said. Asch’s archives are housed at Yale, alongside a host of other material relevant to the play. “I found a treasure trove and spent part of my three years at school creating a piece that interwove the transcript of the trial with the text of the play.” She didn’t feel the result lived up to her vision of reinvigorating “God of Vengeance,” but the idea never left her.

“I wanted to find a writer who could embrace the fullness of that story,” she said. Vogel was recommended to her by David Chambers of Yale Drama; Taichman, doubtful that Vogel would be interested, reached out on a limb. It turned out that Vogel had also been startled by “God of Vengeance,” and fallen a bit in love with it. “She said yes in five minutes,” Taichman said.

The duo’s attachment to “God of Vengeance,” a combination of adoration and awe, finds its onstage manifestation in Lemml, the stage manager. A tailor who’s never seen a play before, he’s brought to the first reading of “God of Vengeance” at I.L. Peretz’s salon by a third cousin. The salon’s more literary attendees cast aspersions on the play, giving up their roles in it as it grows progressively more transgressive, but Lemml is enraptured. He joins the first production of “God of Vengeance” as its assistant stage manager, and becomes the play’s greatest advocate, escorting it through the subsequent nearly four decades of performance that “Indecent” covers.

If you do the math – nearly four decades on from 1907 – you know where the play is going, but it’s the rare vehicle in which the Holocaust, while part of the narrative, doesn’t dominate the story. That was intentional.

“I’m interested in trying to rediscover the innocence we had as a people before the entire paradigm changed,” Vogel told me over the phone. The one character whose innocence is compromised in advance is Asch, who investigated pogroms in Vilna and Kiev for the American Jewish Joint Distribution Committee in the early 1920s. “He did foresee what was going to happen,” Vogel said. That foresight, in “Indecent,” is Asch’s tragedy. As he focuses his energies as a writer on material he thinks might spur those in power to prevent the unfolding tragedy, he’s driven away both from “God of Vengeance” and those, most significantly Lemml, who remain passionate about it.

Asch’s story isn’t the main subject of “Indecent,” although it’s a consistent theme, from the first scene in which he shows his wife Madje “God of Vengeance” until his last appearance, when he leaves the United States after receiving a summons from the House Un-American Activities Committee. His story is a minor-key harmony to the guiding, quietly triumphant history of “God of Vengeance” and those who loved it. That love manifests not only in their dialogue – “I am not acting in this garbage. They’ve cut the rain scene,” fumes an actress, disparaging proposed changes to the love story – but also in the production’s poetic physicality. The actors dance, fight, kiss, and touch with a freedom and dreaminess rarely seen in theater; in a climactic moment of stage magic too lovely to spoil, it seems the entire universe in which “Indecent” occurs showers approval upon its source text. As a sensory experience, it draws audiences in so slowly they barely notice they’re being enveloped.

“It was an extraordinary chance to conceive of this piece using music and choreography,” Vogel said. “There’s a very emotional logic,” Taichman added. “It’s not rule-bound.”

That emotional logic centers on the aforementioned rain scene, a purely joyful, reverent moment in “God of Vengeance” in which the female lovers meet in the middle of a storm. That scene, in fragments, recurs throughout “Indecent,” posed as the interaction that makes “God of Vengeance” most extraordinary. When the producer alters it before the Broadway premier, Lemml pleads with him to change his mind, recounting the almost prayerful way in which, every evening, the entire cast watches the scene from the wings. The scene itself isn’t performed in full until late in “Indecent,” when Lemml and his troupe are starving in the Lodz Ghetto. They’ve been beaten down, a few barely hanging onto life, but the scene blazes forth as an assertion of a love capable of obliterating earthly trouble.

That’s a departure from Asch’s intention. While “Indecent” and “God of Vengeance” are connected by the love the characters of one have for the other, the two plays are separated by their fundamental attitudes towards love. “God of Vengeance” depicts a love of astonishing beauty, but isn’t hopeful about that love’s potential; “I think it’s a play about a violent and corrupt world in which this purity or innocence tries to exist,” Taichman said, “a world that conspires against love and in which love is trying to survive.” “Indecent,” rather than questioning whether love can survive in a brutal world, shows audiences how it does, investing love with the power to transcend that world’s limits.

“My God, Sholem,” Madje Asch says in “Indecent,” after reading “God of Vengeance” for the first time. “It’s all in there.” And indeed, in “Indecent” it is: beauty, horror, grief, and a persistent, achingly beautiful respect for love, whether between two women in the rain or a tailor and a little Jewish play. Asch and the actors who first performed his work may have returned to dust, but Vogel, Taichman, and their creative collaborators have given “God of Vengeance” the resurrection it deserves.