Did One Of Spain’s Greatest Artists Actually Have A Feminist Streak? 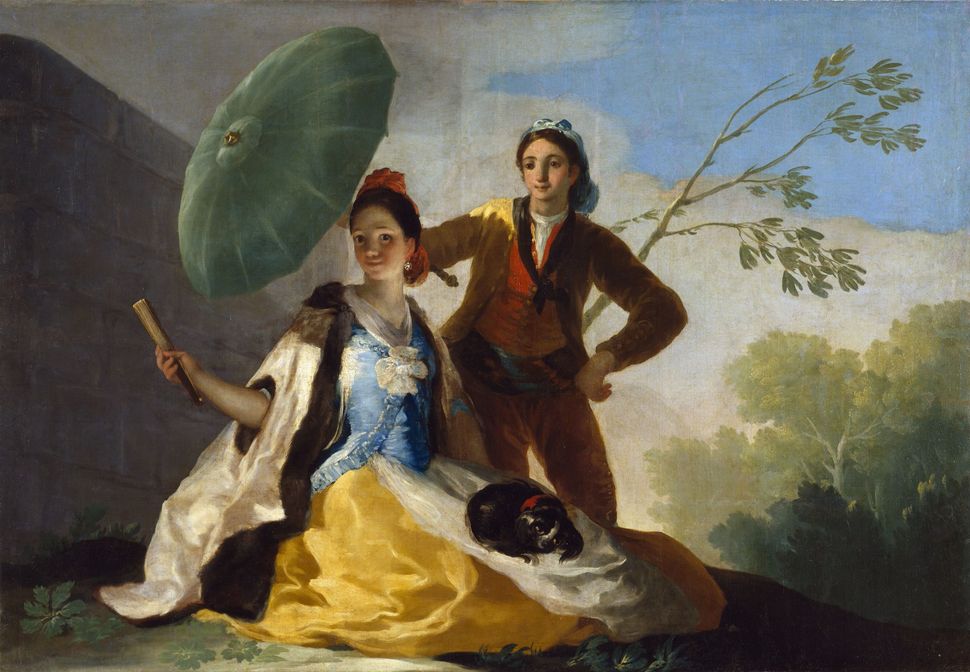 Image by The Israel Museum

Israel’s official relationship with Spain is only 30 years old, and is being celebrated with a remarkable exhibit of prints and paintings by the great Spanish artist Francisco Goya (1746–1828), now on view at The Israel Museum, in Jerusalem. Unofficially, of course, Spain occupies a unique space in the history and memory of the Jewish people, ever since the expulsion of the Jews from Spain in 1492 forced Jews to flee for their lives; most of the refugees resettled in Muslim countries, primarily in North Africa and the Arab world. Many remained there until 1948, when numerous Jews living in Arab countries were expelled again and thus fled to the new State of Israel.

The Goya show, titled “Francisco Goya: Daydreams And Nightmares,” includes an incredible series on the horrors of war, one that should move an Israeli audience painfully familiar with the wounds of battle. Goya depicts a brutal rape scene, as well as a dismembered male body in a tree. I observed some older tourists looking away in obvious horror.

The show, which also marks the artist’s 270th birthday, includes a charming series of prints on women and courtship that is far easier on the eyes. Goya, it turns out, had a feminist streak. He depicts a poor and beautiful young woman forced to marry an ugly older, wealthy man, and titles it “Que Sacrificio” or “What A Sacrifice.” He also rails against men who marry a wife for her heritage and not for herself; it’s interesting to imagine religious viewers who take family history seriously viewing that etching, which is titled “Hayichus” in Hebrew and “The Filiation” in English.

Goya wrote fascinating comments on his prints, which should not be missed. The description Goya wrote for “Hayichus,” which depicts a bride with the face of an animal, reads:

Pretty progressive stuff. Goya was deaf toward the end of his life, and he was astonishingly productive late in his career; he also seemed to get feistier with time. He appeared to have strong views on marriage, romance and the role of women in society. An outstanding etching titled “Can’t Anyone Untie Us?” features a man and woman tied together with ropes, “struggling to get loose and crying out to be untied quickly. Either I am mistaken or they are two people who have been forced to marry,” Goya writes.

The descriptions here are in Hebrew, English and Arabic, but the curators do a nice job of explaining any issues with translation from the Spanish by using asides in parentheses. To wit, for an etching of brushed aquatint and drypoint titled “Swallow The Dog,” the translation of Goya’s text reads:

“He who lives amongst men will be irremediably vexed [in Spanish the word also means “syringe”] If he wants to avoid it he will have to go and live in the mountains, but when he is there he will discover that to live alone is vexatious.”

I do wish that Goya’s fiery Spanish commentary would always be visible. Instead, sometimes, all that is visible due to framing issues is the title. But even with that curatorial hiccup, the show is tantalizing. Not only does it include a wide range of Goya’s prints — from his very first etching to his last — but it also represents a warm handshake between countries, as well as the promise of continued cooperation between Israel and Spain.

“Francisco Goya: Daydreams And Nightmares” is showing at The Israel Museum through April 18.

Aviya Kushner is the Forward’s language columnist and the author of “The Grammar Of God”( Spiegel & Grau, 2015). Follow her on Twitter, @AviyaKushner

Did One Of Spain’s Greatest Artists Actually Have A Feminist Streak?