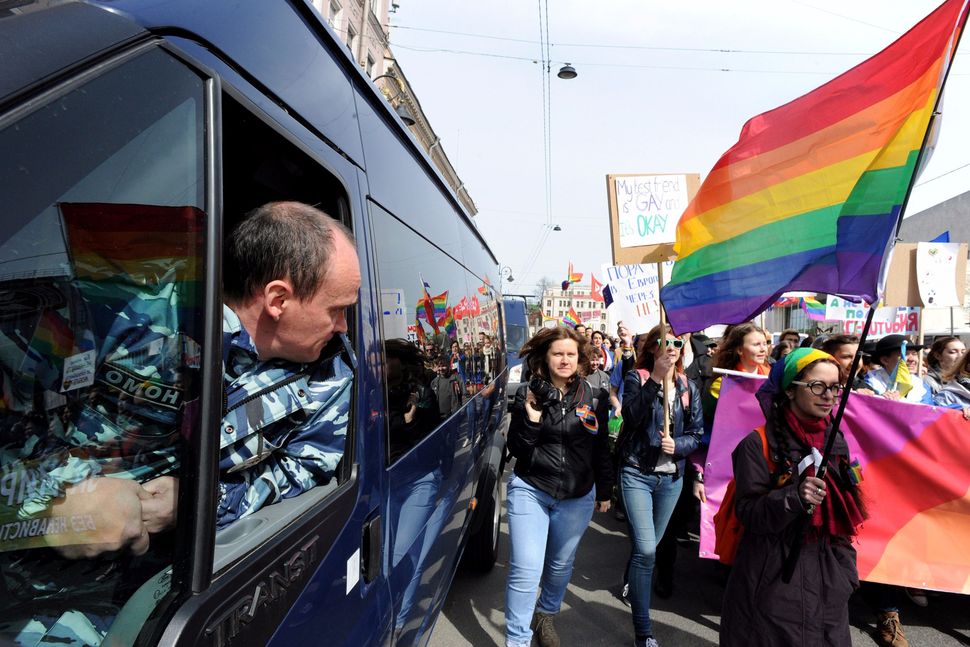 At the end of one of Dmitry Kuzmin’s poems, there is a curious stanza, which, to an American reader comes across as an odd bit of legalese. But to a Russian like Kuzmin, the stanza is both a social critique and a method of self preservation (we will return to the rest of the poem later).

and of the other institutions of establishmentalized lawlessness

functioning on the territory of my squalid nation:

the present text is not liable under statute 6.21 of the RF legal code

regarding “administrative violations of rights” even though

it is not intended for dissemination among minors.”

The statute in question is colloquially known as the “gay propaganda law” which bans the dissemination of “propaganda of non-traditional sexual relations” among minors. Though the law does not specifically mention homosexuality, critics assert that it is quite obvious who the law is intended to target. In an interview in Sampsonia Way, Kuzmin, who is himself gay and who often engages with his own “non traditional” sexuality in his work, argues that the law itself, while a problem, is less intended to actually prosecute LGBTQ Russians than it is “to spread hate and xenophobia in Russian society.”

The law was passed four years ago, but, by all accounts, Russian society remains staggeringly homophobic (which is unsurprising for a country led by a conservative, fascist strongman enamored, like all dictators, with public displays of machismo). In Chechnya, which is an official subject of the Russian state, the situation is far more dire than it is in Russia proper. The republic’s leader, the unhinged and stupendously cruel Putin puppet Ramzan Kadyrov, has recently undertaken a brutal campaign of violence targeting Chechnya’s gay population. The New York Times recently published a heartbreaking article in which three men describe their experience of torture at the hands of the Chechen authorities. Kadyrov denies the well documented allegation, saying that his forces cannot possibly be torturing gay men, because there are no gay men in Chechnya (a similar line was once taken by former Iranian President Mahmoud Ahmadinejad).

I bring all this up by way of introduction for Dmitry Kuzmin, who is the real subject of this article, only to illustrate the contemporary situation of LGBTQ people in Russian society which serves as the backdrop for much of Kuzmin’s writing. Kuzmin was born in Moscow in 1968 to a literary family. He came to prominence in the Russian literary scene as a poet, but his work extends to criticism and publishing as well. With his site vavilon.ru, he became an important impresario for “non commercial” texts. With projects like RISK, a collection of writing by gay authors, as well as his own poetry, public appearances, and interviews, he has become an outspoken critic of the Putin regime (and Russia at large) for its stance towards “non-traditional” relationships.

His poems, which are unfortunately quite difficult to find in English (so a Russian reader will be able to correct me if my sample size here for Kuzmin’s poetry is too small), often relies on the deeply personal – childhood memories, sexual encounters, evenings with friends. There is a certain quotidian beauty to much of his work, but in the context of Putin’s Russia, the personal for gay men becomes immensely political.

Kuzmin’s poetry, for me, becomes especially important in contextualizing the current crisis in Chechnya. As I have seen on the comment threads of certain articles or Facebook posts (a brief digression to endorse reading the comments – comment threads are filled with nasty, insane, moronic trolls, but they do, to a certain degree, provide insight into how an article or issue is being received), many Putin supporters would have you believe that Kadyrov’s violence is occurring in an isolated space. But, as Kuzmin’s writing shows us, the crisis in Chechnya is simply a more violent manifestation of beliefs and desires that exist in Russia proper – both in popular sentiment and in law. State sanctioned discrimination will always end in violence, one way or the other.

The poem I referenced to start the article is too long to print here (though it is my favorite of Kuzmin’s poems), but the full thing can be read here (some wonderful phrases include: “purified by the hygiene of love,” a reference to Putin as “King Herod,” “inflamed patriotism of the cerebral membrane,” and “a patriarchy of the sexual and print organs”). I recommend reading that piece and “On the Moscow Metro and Being Gay” published in Words without Borders. But, in the interest of space, here is a shorter, but still fantastic, poem originally printed at bigbridge.org. Notice the intense attention to detail, the way Kuzmin is able to build a complete scene in such a short space. Notice too the connection between the “rat” killed by the cat and the “rathole” in which Kuzmin ends the poem. The mere presence of a homoerotic scene is a statement itself, but the connection between the two pieces of the poem also hints at the implicit (and now, explicit) threat of state violence. Read below:

father squatted down on the porch and clicked his lighter.

i thought for a bit, then dropped down beside him, giving up on spotless white jeans.

over on the right, a cat snoozed on a stack of wood, incredibly furry,

across from us, shrunken in all her ninety-six years,

a grandmother drowned in her beach chair,

fiddling with the dials of her radio set,

over to the left, past the hedge of phlox, a pair of aspens shivered,

and a small trail led off to an abandoned raspberry patch.

“yesterday,” father looked over to the right and took a drag,

“he brought in a squirrel, already suffocated.

i almost cried: i feel sorry for it, it’s a squirrel, after all.

“for him it’s nothing but a rat, basically, just with a tail”

and i suddenly had this sharp feeling that this

episode wasn’t part of my life, that this

was some american movie from the middle of the

60’s, say, a hemingway story: in the early morning

on the lake sitting in the stern of the boat with his father rowing,

nick felt quite sure that he would never die

but no, the scene’s all been filmed now, since the sentiments no longer need to be concealed.

and, it seems, i even know the contents of the previous installment:

it was with that same feeling in a half-assed rathole

by the hamburg railway station, rented for three hours before dawn,

that i latched with with my clenched teeth onto little jose’s chocolate nape,

when jason, coal-black, screwed out my nipples with fingers of iron.