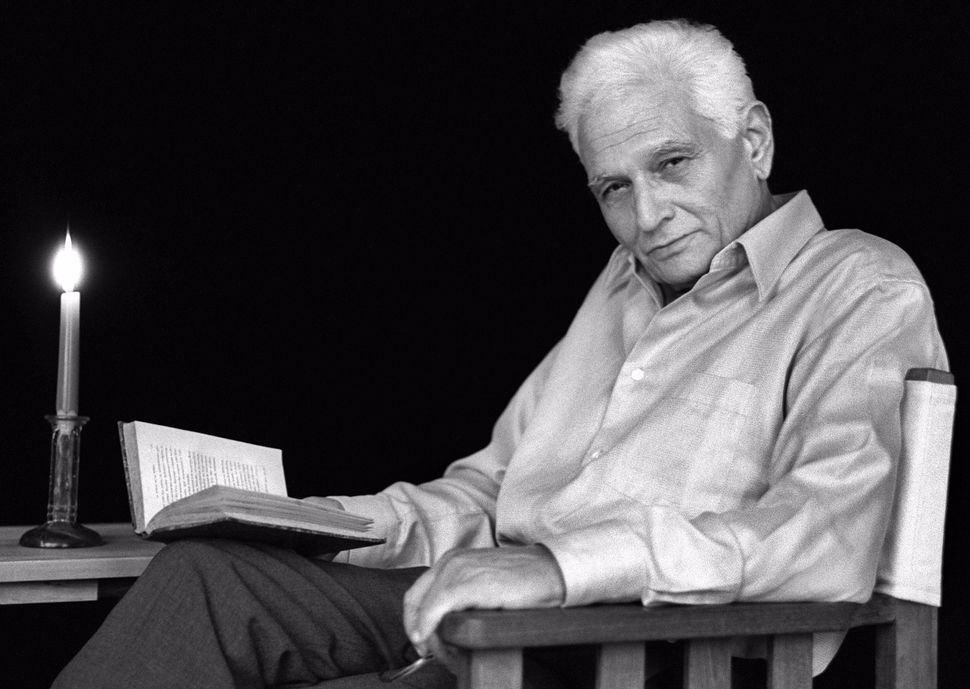 Today in the world of glorious web discoveries, I saw on the OpenCulture twitter account a link to an interview between jazz pioneer Ornette Coleman and deconstructionist philosopher Jacques Derrida. At first glance, it’s a seemingly random, bizarre, pairing, but something about it, on a gut level, just makes sense. And throughout their short conversation, it becomes more and more apparent that the two shared not only intellectual affinities, but personal affinities as well.

The interview took place in Paris in 1997 before and during a concert series that Coleman was performing that summer. The copy available on Ubuweb (which I’ve previously written about here) is an English translation of a French translation of the original English interview (fitting for Derrida). In an article on the interview in OpenCulture, Josh Jones writes that “the live experience itself was a painful one for Derrida. Though he had been invited by the saxophonist, Coleman’s impatient Parisian fans booed him, eventually forcing him off the stage. In a Time magazine interview, the self-conscious philosopher recalled it as “a very unhappy event.” But, he says, ‘it was in the paper the next day, so it was a happy ending.’”

As for the contents of the interview itself, the conversation ranges from the personal to the abstract. On the side of the personal we have insight into the titles of Coleman’s compositions (“Lonely Woman” was named after a painting of “a very rich white woman who had absolutely everything that you could desire in life, and…the most solitary expression in the world”) as well as anecdotes from Coleman about his double outsider status (both being a black man in the south and, more generally, as a man with a “bizarre look” and sound). This outsider status is something to which Derrida can intimately relate, having grown up as a Jew in Algeria during World War II (by way of analogy, Derrida compares his expulsion from school because of “racial laws” to the “Reserved For Whites” signs he saw upon his first visit to the United States).

The conversation also tackles more theoretical questions. Most notably, Derrida and Coleman consider the question of free improvisation, that is, is it really free in the way that Coleman’s critics allege (made up out of thin air)? Derrida naturally takes Coleman’s musings on improvisation and converts them to the language of deconstruction – he considers Coleman’s music as text. He says, “Perhaps you will agree with me on the fact that the very concept of improvisation verges upon reading, since what we often understand by improvisation is the creation of something new, yet something which doesn’t exclude the pre-written framework that makes it possible.”

The two come to an agreement that musical improvisation encompasses a kind of repetition – “the unique event that is produced only one time is nevertheless repeated in its very structure.” In jazz, in particular, compositions are often vehicles for a sort of musical deconstruction (in both the philosophical and literal sense of the word), with musicians using the composition (text) as a jumping off point for further exploration. The act of improvisation is intrinsic to the music and the composition – thus, though a “unique” aural event, the act of improvisation, being inextricable from the music, constitutes a repetition. Indeed, repetition, exact repetition, can be an improvisatory event, and an incredibly jarring one at that (a fine example is Ahmad Jamal’s solo on “But Not For Me” live at the Pershing Lounge. Or rather, imagine a record in which both sides are exactly the same – it would be shocking in a way even the most radical music rarely is).

The interview, though short, is filled with brilliant little nuggets like the few mentioned above. On display is Derrida’s unique turn of phrase and thought, Coleman’s wonderful weirdness and honesty, and an example of patient, intelligent, artful conversation. It’s a gem for philosophy lovers and jazz lovers alike, but it is also instructive for anyone interested simply in the art of the interview. These men were two absolute giants of their respective fields and a meeting of minds like these is always an event.