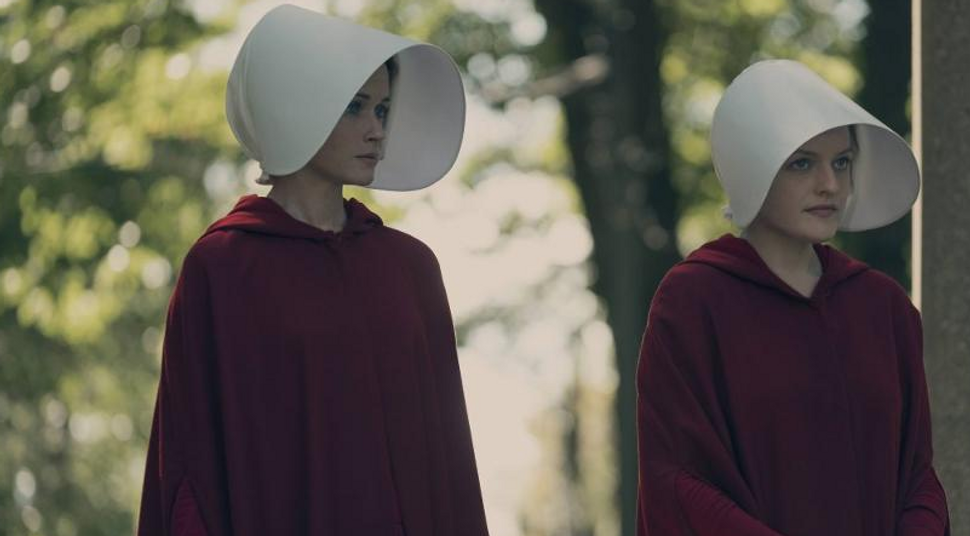 When Margaret Atwood published “The Handmaid’s Tale” in 1984, the dystopian genre in literature was about to change.

The books that had defined it, including Aldous Huxley’s “Brave New World” and George Orwell’s “1984,” had been preoccupied with the threat of socialist totalitarianism. Atwood wrote “The Handmaid’s Tale” in West Berlin, in the shadow of the still-secure Soviet Union, the real-world embodiment of her predecessor’s fears. But within a decade, the USSR would crumble, and a new world, to borrow Huxley’s term, would emerge.

Atwood could already perceive some of the threats that would define it.

The book she wrote in response was markedly different from its predecessors. Set in Gilead, a nation created in the former United States after a theocratic coup, “The Handmaid’s Tale” didn’t take place 600 or even 60 years in the future. It took place within throwing range of the moment in which Atwood imagined it. In Gilead, science and technology were not essential tools of oppression. The new society’s ills were not inextricably linked to socialism.

And crucially, the society revolved not around compulsory worship of a leader of state, but instead around strictly dictated observance of a religion that resembled fundamentalist Christianity.

In the United States, the influence of evangelical Christians in politics was on the rise. In Germany, Atwood thought back to the country’s 17th-century Puritan past, and its specific oppression of women. The society she crafted in “The Handmaid’s Tale,” in a quest to combat a plummeting birth rate, relies on misogyny for its very survival. In it, fertile women like the protagonist, Offred, are circulated between powerful men to serve as surrogates for them and their wives.

“The biblical precedent is the story of Jacob and his two wives, Rachel and Leah, and their two handmaids,” Atwood recently wrote in The New York Times. “One man, four women, 12 sons – but the handmaids could not claim the sons. They belonged to the respective wives.”

When contemporary politicians discuss the United States’s Judeo-Christian values, the Jewish community often chuckles over those figures’ unorthodox interpretations of the “Judeo” part of the equation. Yet Gilead’s biblical precedent is one that Christians and Jews share. And Gilead, as the novel unfolds, reveals itself to be dispassionate about a specific affiliation with Christianity. Its Bible, for instance, is a perversion of the Christian Bible, revised to match the specific ideology of the parties now in charge. An example: At one point, an authority cites a Karl Marx quote about the distribution of property as Biblical precedent.

Hulu’s new television adaptation of “The Handmaid’s Tale,” the first three episodes of which were released on April 26, gives audiences a single episode in which to imagine that Gilead is, simplistically, an imagined extension of fundamentalist Christianity. Then, early in the second episode, Elizabeth Moss’s Offred and Alexis Beldel’s Ofglen, Offred’s assigned companion amongst the handmaids, pass a cathedral in the process of being torn down.

“That was my dad’s parish,” Offred says. “My daughter was baptized there.”

“They took down St. Patrick’s in New York City,” Ofglen responds. “Blew it up and dumped every stone in the Hudson River. They f***ing erased it.”

Why would a Christian regime be tearing down churches?

It’s possible, but not likely, that the regime is only tearing down churches of denominations it finds incompatible with its own.

It’s possible that it’s a show of power: There are no old gods, only the new ones we create.

And it’s possible that it’s a hint from Atwood and the show’s creators that the horror of “The Handmaid’s Tale” has never been about a specific religion’s predilection for authoritarianism, but rather the possibility that any religious ideology, taken to its extremes, can both diverge from that religion’s intent and become a ruthless mechanism of oppression.

The premiere of the TV show has elicited widespread remarks about the story’s timeliness, often aimed at the newly-installed Republican-controlled government’s attempts to reduce the degree of reproductive choice afforded to women, and the chilling representation of a country that seemingly instantaneously shifts from free to authoritarian. In lighter ways, the show itself winks at its appropriateness for the present moment, its characters making offhanded references to Tinder and Über.

But although there’s nothing specifically Jewish about “The Handmaid’s Tale,” the story of Jacob, Rachel and Leah aside, the show is uniquely relevant for Jews.

In the series, the camera makes a necessarily uncomfortable habit of dwelling in close-up on the faces of female characters, from Offred and Ofglen to the icy wife of Offred’s commander. Following their often fraught interactions, their faces tend to collapse, briefly, into an expression of repressed yearning. It’s not surprising that Gilead has, in commodifying women in relationship to men, made any form of non-dictated interaction between the sexes impossible. It’s a heartbreaking side effect that the move has weaponized women against one another; their desire for connection is clear, their fear of its consequences clearer.

In Jewish communities in the United States, Israel, and elsewhere, the mobility of women is too often decided by men, or constrained by the legacy of a deeply patriarchal history.

Israeli women can’t serve on rabbinical courts; their Supreme Court-approved right to pray at the Western Wall remains viciously contested; they can’t visit the Knesset in clothing deemed inappropriate; they can’t get a divorce without their husband granting them a get. A recent report by a deputy Israeli Attorney General found that women are being increasingly excluded from Israel’s public spaces, remarking that “day by day, the number of places where the Israeli public, women and men, can share a public space is diminishing.”

In certain Jewish communities in the United States, opportunities are similarly limited. Accounts by women who have gone “off the derech,” a formerly derogatory term that describes someone who has left Orthodox Judaism, have described a culture of sexual repression, exclusion from participation in religious ritual, and ostracization of those with any connection to the outside.

It would be insulting to directly compare these conditions to those of “The Handmaid’s Tale.” Still, the series makes painfully clear how much human relationships suffer from religious sentiment taken to its greatest extremes, and, specifically, how quickly women’s relationships deteriorate under the strict regulation of men claiming God-given authority.

Those lessons aren’t restrained to Gilead, nor to Christianity. They are universal. The more any group relies on segmentation to maintain itself, the more fragile it will become.

In an essay by Faigy Mayer, published posthumously by Tablet Magazine after Mayer’s 2015 suicide, Mayer considered whether Hasidic Judaism could survive the increasing dominance of the internet. “IF PEOPLE WERE ALLOWED TO THINK, THEY WOULD NOT BE RELIGIOUS,” she wrote.

In “The Handmaid’s Tale,” Offred draws strength from a remembered Latin phrase she used to laugh over with her schoolmates: “nolite te bastardes carborundorum.” It means “don’t let the bastards grind you down.” It’s a powerful sentiment. But ultimately, there is only so much that one woman’s will can do.