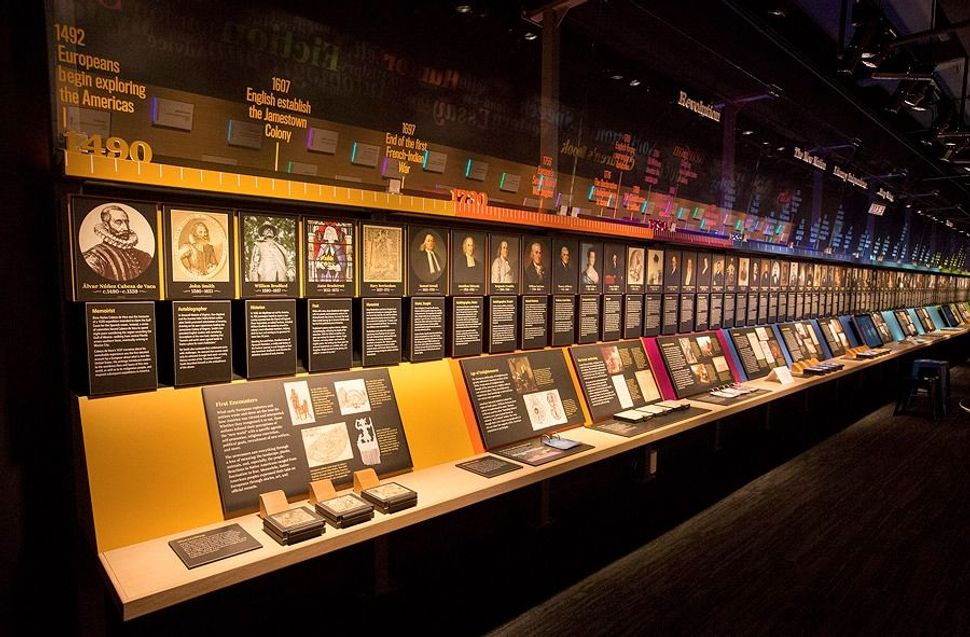 Ann Landers and Susan Sontag. Allen Ginsberg and Isaac Bashevis Singer. Gertrude Stein and Shel Silverstein. And a pioneering journalist named Ab Cahan. When the American Writers Museum opens on the second floor of a Chicago office building this week, Jewish visitors will find themselves well-represented. Jewish names loom large here, from a “Visionaries and Troublemakers” exhibit to a wall of fame that honors a hundred A-listers of American letters. The museum is the first of its kind in the United States.

For its organizers, one of the biggest challenges was choosing who to include – especially for the 100 coveted spots on that wall. “Making a list like that is a mug’s game,” said Max Rubin, a content committee member and publisher of Library of America, which reissues classic American works in spiffy new editions. “On the one hand, you look for inherent literary merit. On the other hand, you’re looking at historical significance. Who looms so large that they can’t be ignored? Who opened up new territory for American literature? Who was an undeniable influence on writers who came after?” One criterion the committee imposed across the board was to exclude living writers, Rudin said.

Likewise, the museum’s approach to American letters is catholic. A passageway dubbed “A Nation of Writers” highlights ad slogans, rap lyrics, movie dialogue, and stage snippets along with passages from the American literary canon. The “Visionaries and Troublemakers” exhibit acknowledges agitators whose writing often pressed a thorn in the side of the mainstream.

While it’s packed with content, beautifully designed, and thoughtfully executed, the museum was actually a rush job by culture-business standards. Its narrative starts in 2010, when a retired manufacturing executive named Malcolm O’Hagan visited the Dublin Writers Museum in Ireland. Returning home to Massachusetts, he sought out an American counterpart, only to learn it didn’t exist. Kicking into high gear, O’Hagan managed to raise $10 million, engage a stellar board of advisers, and win the support of Chicago Mayor Rahm Emanuel, whose city was chosen for its strong literary tradition and huge tourist traffic.

From his New York office, Rudin gave the Forward the inside scoop on how some Jewish writers made the cut for inclusion in the museum.

“Jewish-American writing in its classic phase, is, in a way, a literature of immigration,” he said. “Including Ab Cahan and Henry Roth as the main crafters of stories around the first generation of immigrants seemed necessary – they had to be there.” Cahan is saluted for launching the Forward, but also for The Rise of David Levinsky, his semi-autobiographical 1917 rags-to-riches tale.

Then, Rudin said, “the wave of Jewish-American writing after World War II reenergizes the American novel, marrying mandarin intellectualism with slangy, jazzy street talk. Bellow’s a classic example — we couldn’t leave him out.”

Arthur Miller, Rudin continued, “was a towering figure in theater in his generation. Tony Kushner and others have talked about the indispensable debt that all subsequent playwrights owed to Miller.”

And the Nebraska-born author and activist Tillie Olsen “gives voice to women and the working class, in work whose poetic compression contrasts with more expansive figures like Bellow,” Rudin explained. “It’s an important part of the story to tell. Her career, and her interest in literary silence, in a way makes her work stand in for all the voices that aren’t on that wall, the immigrants and potential writers who — for reasons she eloquently discusses — couldn’t become the writers they might have been.”

Carey Cranston, the museum’s director, echoed that message. “This country was founded on the written word,” he told the Forward. “You celebrate American writing because it’s a huge part of how this country came to be. It’s the story of how people changed lives and changed the world through the power of the written word.”