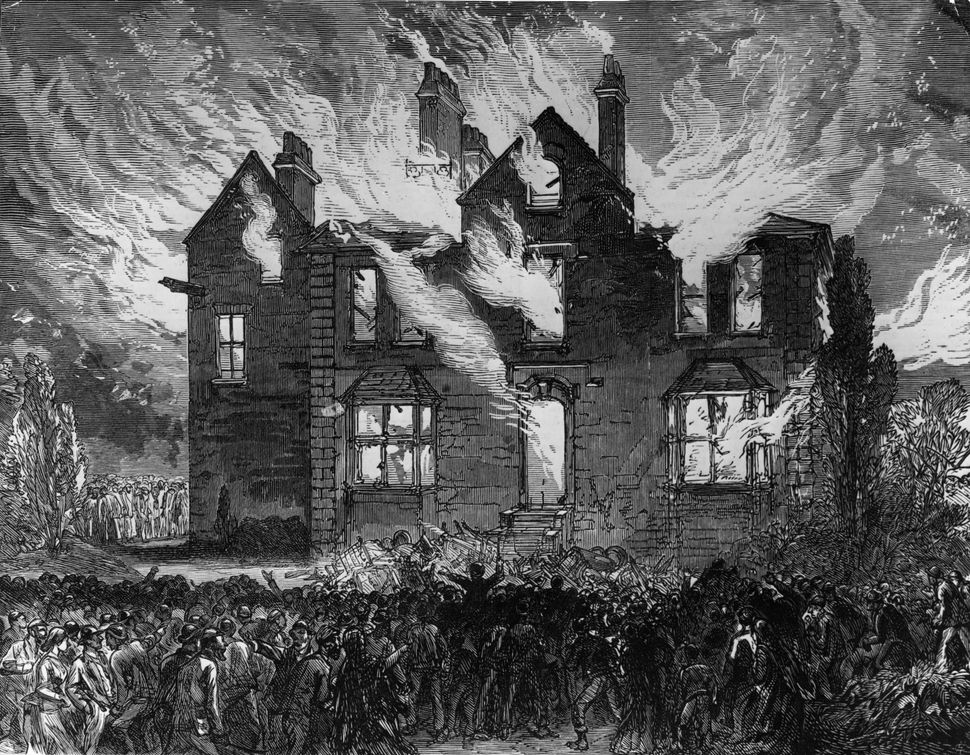 You won’t find the phrase “Jewish lightning” in the Oxford English Dictionary. But if you go to Urban Dictionary, a site that aims to explain spoken English, you’ll find that the top definition is: “to set your house or business on fire on purpose to get the insurance money.”

The New Partridge Dictionary of Slang and Unconventional English, edited by Tom Dalzell and Terry Victor, gives a similar definition, with a slightly more official-sounding tone: “an act of arson as part of a fraudulent insurance claim.”

That definition sounds like a novel, and it’s no surprise that novelists — both Jewish and non-Jewish — have been fascinated by the subject of an intentional fire. So are linguists.

When The American Dialect Society took up the subject of “Jewish lightning” on its list-serve, linguists quoted various books that mention “Jewish lightning,” from historical texts to novels, but never seemed to identify an original source. (They did, however, marvel at how many citations there were in Google books and Google in general.) But interestingly, the linguists do explain that “Jewish lightning” often goes along with the phrase “successful fire.”

For the benefit of those of you who are young, or respectable, or not New Yorkers, I will explain that the expression carries a cynical imputation that the fire had been started on purpose, in order to collect on the fire insurance. The more completely the building was destroyed, the more “successful” the fire.

Meanwhile, novelists attracted to this stuff don’t bother with defining “success” when it comes to fire — they want to explore the desperation, and often love, that leads someone to take such drastic measures. In Bernard Malamud’s classic novel “The Assistant,” for instance, struggling Jewish grocer Morris Bober declines an arsonist’s offer to burn down his home and store, but eventually ends up setting a fire himself. He is stopped by his Italian assistant, Frank, an Italian who is also in love with the grocer’s daughter.

Then there are writers who use “Jewish lightning” as more than just a subject — they use it as a title. The Iowa Review published a short story titled “Jewish Lightning” by Earl Ganz in 1975; it includes a paragraph with a theory on Jews and fire:

It’s not altogether implausible to relate the current notion that Jews are partial to fires for profit to their medieval reputation as arsonists. In 1337, in the town of Deggendorf, Bavaria, as a result of a charge of host desecration, the Jewish Quarter was attacked and set on fire. But fire spread rap idly through the tinderbox towns of those days and in no time all Deggen dorf was ablaze. Later, when a church was erected to commemorate the event and a suitable inscription was placed at its entrance, it read: “Anno 1337, the day following Michaelmas Day, here were the Jews slain. They had set the city on fire.”

More recently, The Times of Israel published a blog post on “Jewish lightning” by Irene Rabinowitz, who shared this anecdote:

A couple of years ago, I was having drinks with two women who were donors to the organization for which I then worked as director. One of them, describing a fire in her New Jersey town, said “It was Jewish lightning, we all knew it.” Stunned I said to her, “So you believe that Jews are so greedy that we will burn down our own buildings for insurance fraud?” She said, “I never thought of it that way, but it does happen.” I slapped down $30 for the drinks and left.

Rabinowitz’s reaction makes sense, given that the Stormfront website — yes, it promotes “white pride” — also has a lively and virulently anti-Semitic discussion of “Jewish lightning” on its message boards, along with a rather disgusting discussion of Jews swallowing bananas.

And though all the preceding examples are American, the phrase “Jewish lightning” is also part of British culture. The British spy novelist John le Carré was asked about his portrayal of a Jewish tailor in London in his novel “The Tailor of Panama,” in an interview with Andrew Ross of Salon, and the phrase came up. Here is the exchange:

Uncle Benny is Jewish, from the East End of London. Did you have any fears, in tackling Jewish characters and using their vernacular, that people might say you were embracing anti-Semitic stereotypes?

I have carried that label around with me ever since I wrote “The Little Drummer Girl.” I received such awful letters from organized Jewish groups that I never felt on safe ground after that. My great sin was suggesting that the state of Israel that Palestine was in fact a twice-promised land.

Still, I didn’t feel queasy about addressing the tradition of Jewish tailors in the East End. It’s so deeply embedded, and so historically extended, that most of the good jokes are true. There was a community of rascally Jewish tailors. The insurance companies, many of which were Jewish, referred to “Jewish lightning” when unfortunate fires burned down warehouses in the East End.

The mind wonders: were those “unfortunate fires” entirely unfortunate?

Sure, most people understand “Jewish lightning” as an ethnic slur, a variation on the ancient and ugly theme of Jewish greed. For politicians, it’s not a good choice of words; The Toronto Star reported that a councilman who used it in 2010 was accused of anti-Semitism, with a headline blaring “Caledon Councilor Under Fire for Anti-Semitic Remark.”

But in novelists’ hands, it can mean a story that keeps burning its way up the best-seller list.

Aviya Kushner is The Forward’s language columnist and the author of “The Grammar of God” (Spiegel & Grau). Follow her on Twitter at @AviyaKushner