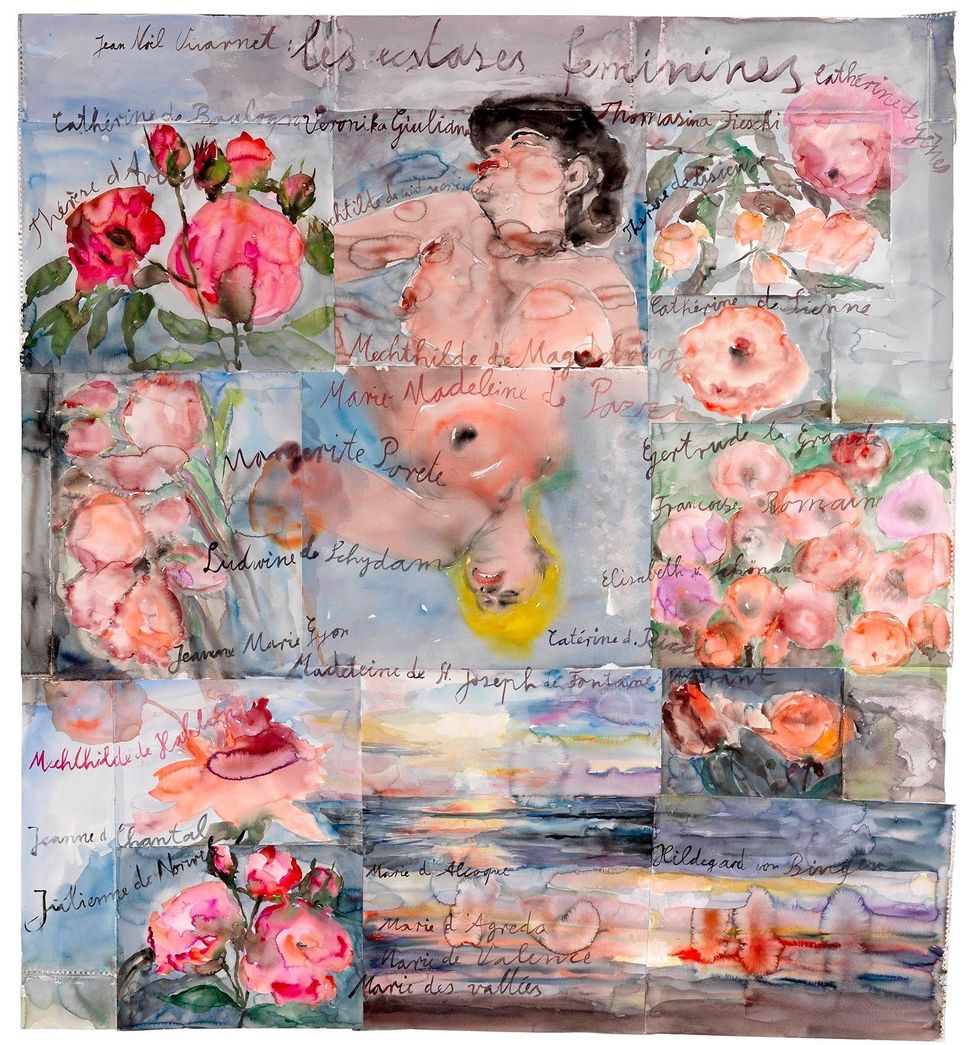 Much of German artist Anselm Kiefer’s work can be captured (to the extent that art can ever be described with total accuracy) in a single word: ruin. Kiefer, born in southwest Germany in 1945 just two months before the end of World War II, has dedicated a large portion of his oeuvre to reckoning with his country’s past – or, more specifically, with the ruin of his country and people, both morally and physically. He is most widely known for his large, imposing canvases which incorporate, aside from paint, materials like straw, glass and ash. The resulting works have a tactile quality, quite literally dripping and bursting off the canvas. The fragility of the materials used suggest at turns the evanescence of memory and the natural, and constructed, processes of death and decay. In the 1970’s and 1980’s, Kiefer’s work made explicit reference to “Todesfugue,” a poem by Jewish poet Paul Celan about his time in a concentration camp. The works from this period are immensely foreboding – predominantly gray, blue, yellow, and brown, the otherwise pastoral nature of the works is betrayed by their inspiration – we known what hides beneath those fields.

All of this is to say that Kiefer is most recognized for his “dark” works. But a show of new works at the Gagosian Gallery in Chelsea, titled “Transition From Cool To Warm” (also the name of his 1977 book of watercolors), plumbs a lighter side of the artist. The work in the show can be divided into four categories – watercolor Nudes, watercolor (non-Nudes), large canvases, and artist books. Let’s begin with the good, and work our way towards the disappointing.

The large canvases deal largely with the kinds of visual materials we’ve come to expect from Kiefer – fields, straw, forests, isolated structures. But, as the title for the show suggests, the “cool” colored fields of the “Todesfugue” period have been “warmed” a bit. It is still, noticeably, irrevocably perhaps, winter, but, in the first large canvas, the dreariness of the grays and blues is broken by two thick splotches of red. The red most strongly resembles a slash of blood across a plane of snow, but still, the presence of fresh blood means that something is, or was, living.

The other large canvases also carry traces of life. In the second, on opposite walls, we see two perspectives on the same structure. One seen from behind a crop of wheat – the wheat’s orange tips, the faint orange glow in the back of the image, and the skeletal structure in the image’s center all suggest a fire, and so, we might imagine we are again in the realm of death and ruin. The opposing viewpoint is even more evocative of a disastrous fire – here the structure is seen from the vantage of the forest (seen in the back of the first work), which is now black and brown, that is burnt, with a trace of yellowish embers emanating from the bottom of the now even more skeletal structure. Yet, despite the destruction manifest in the two paintings, their juxtaposition implies life – someone has moved from here to there to make these two images possible. 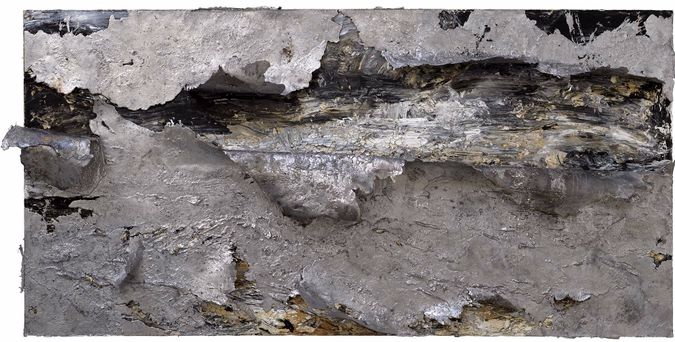 The most striking of the large canvases offers us the most direct metaphor for this transition. The work, titled “des Meeres und der Liebe Wellen (The Waves of Sea and Love),” is divided into two layers – outer and inner. The outer layer is a think layer of silver, the inner, a layer of paint in Kiefer’s frequently utilized earthy palette. Here Kiefer strips away the gray, the outer, the cool, to reveal a world of color underneath – it is not bright, it’s a little bleak, even, but it is color nonetheless.

Before moving on to the artist’s books (which are thematically related to the other watercolor Nudes), a brief note on the non-Nude water colors. They were by and large forgettable. One, “a_ller Tage Abend, aller Abende Tag_ (The Evening of All Days, the Day of All Evenings),” sticks out for its relation to the “Todesfugue” work. Despite the apocalyptic title, the work seems downright hopeful – here we see a sun rising (or setting) above a field remarkably similar to the one depicted in Kiefer’s 2005 work “Des Herbstes Runengespinst – für Paul Celan.” Again, it is winter, but the sun suggests, finally, the possibility of a thaw (what such a thaw would mean in relation to the Holocaust is itself troubling, however). The other non-Nude watercolors primarily depict airplanes flying against a backdrop of a sunrise (or a sunset). Again, we can find a possible reference in Kiefer’s older works – the sculpture series “The Angel of History,” composed of ruined, useless aircraft (the title is a reference to a passage from Walter Benjamin’s “Theses On The Philosophy of History” – “Where we perceive a chain of events, the [Angel of History] sees one single catastrophe”),. But the similarity between “The Angel of History” and the new watercolors extends no further than the presence of aircraft. While the “Angel of History” can be seen as a meditation on the dual functions of the aircraft – as an agent of escape, or connection, and as an agent of death – the context of the airplanes in these watercolors inspires no such meditation. Instead, the images are, quite simply, kitschy – resembling the hackneyed patriotism of bad American suburban house decoration more than anything else (this is a bit harsh – Kiefer’s work is clearly many cuts above, but the comparison stands). 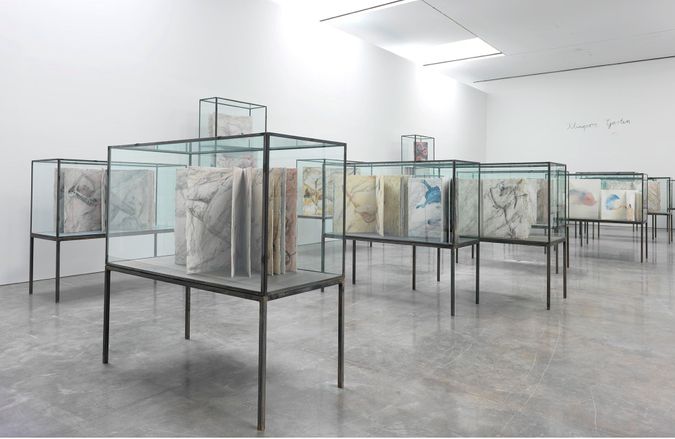 The artist’s books, which act as the crux of the show, are, like most of the large canvases, quite good – until we realize the inspiration, that is. Densely clustered together in glass cases, the books resemble heavy marble tablets – resembling discoveries from antiquity rather than new creations. On the “tablets” are watercolor Nudes, looking both marbled, that is, hard, and also, by virtue of the medium, fluid. They are, as the exhibition materials accurately point out, reminiscent of Auguste Rodin’s Nude sculptures, but there also seems to be a slight affinity to the work of Egon Schiele, in that the women depicted all seem, at times, too small for their skins. Each book is open to three to six pages, and each angle reveals different perspectives on the figures. In some books, each page contains a constituent part of one figure, and in some, each contains a different full figure, but when viewed from various sight lines, the pages combine to create impossible proportions or compositions (4 legs, one and a half faces, etc…).

Abstracted from the inspiration for the room, the Nudes are interesting in their form (and really in form only – there’s not much interesting anymore about Female Nudes qua Female Nudes), but then we read the text upon the wall – “Klingsor’s Garten.” The title is a reference to Wagner’s “Parsifal,” in which the character Klingsor is refused entry to the Temple of the Grail and subsequently builds a garden of temptation outside the entrance to ensnare the righteous on their quest for the grail. In Kiefer’s “Klingsor’s Garten” the temptations are, predictably, naked women. In light of the title, the arrangement of the books becomes maliciously labyrinthine. There is a not-so-implicit condemnation here – women are temptresses, directly opposed to and working against “the righteous.” A quote by the late, great John Berger comes to mind: In reference to Memling’s 15th century painting “Vanity,” Berger writes, “You painted a naked woman because you enjoyed looking at her, you put a mirror in her hand and you called the painting Vanity, thus morally condemning the woman whose nakedness you had depicted for your own pleasure.” 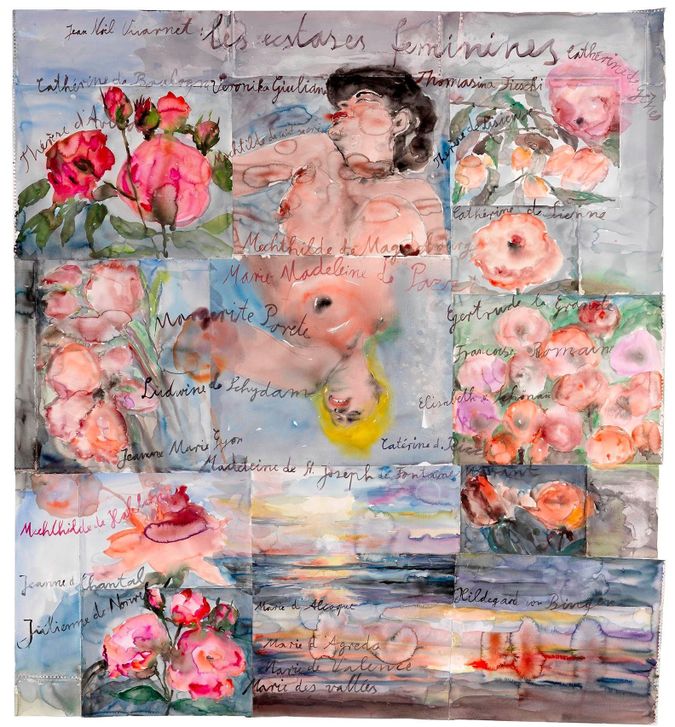 The other watercolor Nudes in the show are no better. In a room titled, un-ironically, “Exctases féminines (Feminine Ecstasies),” Kiefer gives us a series of watercolors of nude women, either mid-orgasm, masturbating, or positioned for intercourse with, presumably, Kiefer himself or the male viewer (the French title, as opposed to the German of the rest of the show, is needlessly affected, even if we take Kiefer’s residence in Paris as a mitigating factor). The women are invariably juxtaposed against sunsets (or sunrises), flowers, and oceans – which is to say, Kiefer has employed the most tired available metaphors for female sexuality in the service of Art’s most tired genre. The flower metaphor, like all metaphors, has certain implications for its subject – Kiefer’s Nude women must be delicate, sexual, natural (in the sense of “inevitable”), pretty (that is, for display), fragile, and, perhaps most important, ephemeral and renewable (the Nudes are of many women, not a single woman – “I have had many lovers, in French, no less,” Kiefer seems to say). No metaphor is entirely innocent – the overused, least of all.

As previously stated, there is nothing interesting anymore about the Female Nude qua Female Nude (particularly in the hands of male artists), there is nothing transgressive, nothing revelatory – it is, truly, a worn and bloated genre. If you are going to make a Female Nude in 2017, it better be in some way new, it better not simply participate in the same male gaze pseudo-eroticism that has dominated the art world ever since men could paint. Perhaps that was acceptable in some ambiguous then, but this is now and we ought to demand better, especially from one of our greatest living artists.