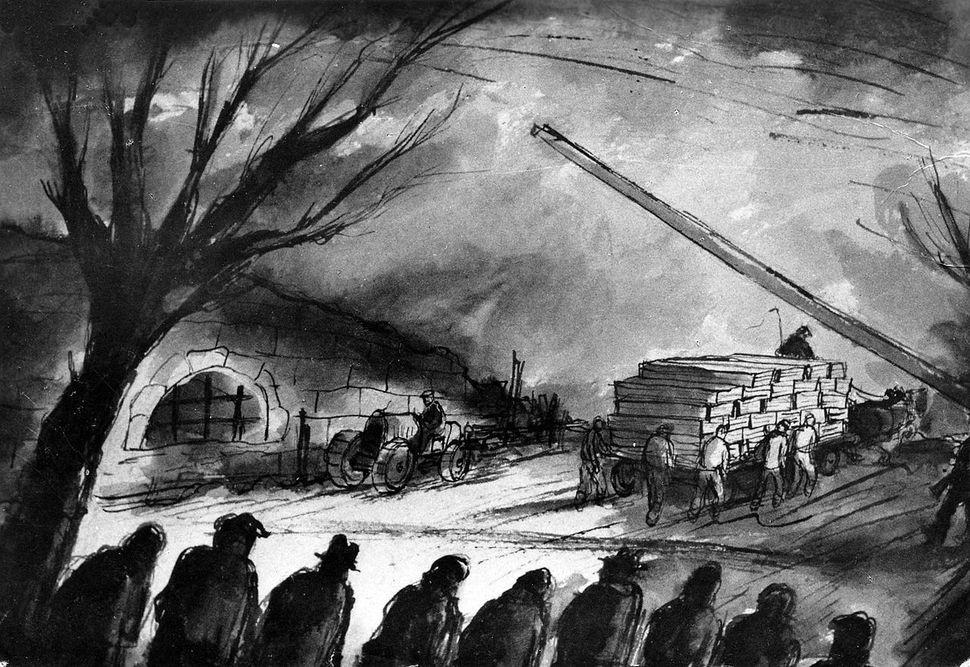 Funeral In The Terezin Ghetto – Bedrich Fritta Image by wikimedia

Recently, the Maryland Institute College of Art (MICA), whose wonderful archive we’ve previously covered here, released the debut issue of their journal of art and design “Full Bleed.” Though “journal of art and design” is MICA’s own categorization, “Full Bleed” includes criticism, poetry, memoir, and more. The first issue, focused on the theme of migration, contains an article that might be of particular interest to Forward readers – “Songs From The City of Death” an introduction to the forgotten work of Hermann Adler.

If, like me, you’ve never heard Adler’s name before, well, that is the occasion for, and the tragedy of the piece. Adler was, per Schirin Nowrousian, the article’s author, “a German Jew, a Shoah survivor, and a poet.” He was born in 1911 to a German family in Bratislava, but raised in Nürnberg. Before the war, he was employed as an educator of sorts (the exact nature of his employment was, according to Schirin, slightly vague). We do know, however, that he was not a poet – that would come later.

Between 1934 and 1940, Adler made a series of migrations – Nürnberg to Prague, then Katowice and Krakow, then Lviv, then, finally, Vilna. According to the article, Adler explained his decision to flee to Vilna in a radio spot he produced in the 1960’s – “Lithuania was said to be a neutral country and it was said to receive refugees, quite in opposition to Switzerland. It was also said that in Wilna [an alternate spelling for Vilna] and Kaunas, the two biggest cities of the country, there were Palestine offices. Each refugee would get a Palestine certificate and would then be able—with the approval of the British—to travel to Palestine while passing through Armenia, Turkey and Syria.”

But the relative safety of Vilna and the promise of the Palestine offices proved to be a lie. In 1940 the Soviet Union invaded the Baltic, and in 1941, the Nazis took their turn. Anti-semitic violence was particularly brutal in Lithuania, and Vilna, despite its history (rather, because of its history) as a Jewish center of scholarship, was no exception. Adler managed to survive the violence surrounding the formation of the Vilna Ghetto, then, after two years in the Ghetto, he was able to survive its liquidation. He fled to the Warsaw Ghetto with the help of Anton Schmid (an Austrian sergeant who helped Jews escape Vilna). He then survived life in the Warsaw Ghetto, and the Ghetto Uprising. After the uprising, Adler fled again, this time to Hungary where he was captured and deported to Bergen-Belsen until the end of the war.

Adler’s story is a grand tour of suffering – he would have met a large number of people and seen, to the extent possible, the brutal capability and efficiency of the Nazi regime. He was, therefore, if not well equipped, then at least well experienced enough to document the suffering of the Jews for posterity. Immediately following the war, and his move to Switzerland, it was precisely this task that Adler undertook in the form of a book of poetry entitled “Songs From The City Of Death.” In the introduction to the book, Adler writes (translated by Nowrousian),

“Rife with opposites is all that exists; and yet perhaps tomorrow already humanity will be fraught with fervid yearning for conciliation; and so this tiny book, with whose composition I follow up on my vow which I gave my brothers in the Wilna Ghetto at the time of the great destruction, has not been written in the language of the victims, but in the time-honored language of—their murderers!”

Both posterity, and ultimately, reconciliation were Adler’s goals. Certainly the Holocaust has been well recorded – as for Adler himself, however, posterity has remained as elusive as reconciliation between the Jews and the rest of the world. Nowrousian explained to me over email that she came upon Adler’s work at the recommendation of a friend working as a lecturer in Vilna. After doing some research into the author, she realized that, despite some success in radio and film, Adler’s name and his work as a poet seemed lost to history – which is precisely what Nowrousian is looking to change. She is currently has a longer forthcoming essay on Adler, but in the meantime, she has translated three of Adler’s poems – a bit amateurish, but filled with spite and irony and hope and pain – for “Full Bleed” and has given us permission to reprint one of them below. Here is “Because They Do Not Know What They Do!” (the other two poems can be read here):

Because they do not know what they do!

Close to the wall of the Ghetto in Wilna a wooden cross stands bleeding,

and the crucified looks piously up at the sky.

Shaking with pain the mother presses herself against the wall of distress;

some Poles pass by, not mocking, that’s true, but silent…

Now the sons of the Ghetto walk the way of the cross; the Poles may soon follow;

No one shall live when freedom once again shines!

Endlessly tormented by pain the crucified shouts out in prayer:

“Father, forgive the murderers; rouse the silent ones!”

And with the swish of the wings of death he speaks under his breath as if blessed:

“Hear, o Israel…” And then the pale mother falls to her knees:

“Father in heaven, you take our children from us, you sentence us to death;

but if you let witnesses live—then speak through them, o God!”