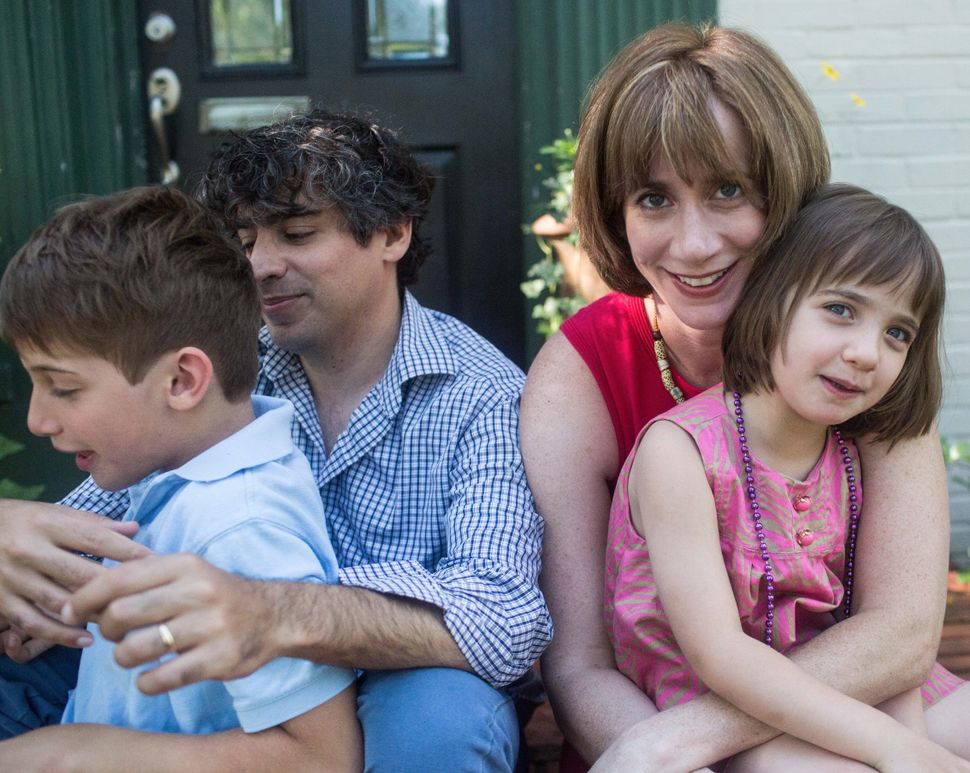 In the weeks following the 2016 presidential election, Laura Moser found a new mission.

Moser, 39, was living in Washington D.C., working as a freelance writer – she has, on occasion, written for the Forward – and taking care of her two young children. Newly engaged in politics after Donald Trump’s win, she saw a need for a service that would help those like her, who were reshaping themselves as activists, organize effectively.

The result was Daily Action, a digital-messaging service that racked up over 100,000 subscribers by the time Trump’s inauguration.

Each morning, Moser sent subscribers a message encouraging a single political action for the day. Each message contained a link that would directly connect recipients with their political representatives.

The service has been both popular and effective. (Its website now brags of various accomplishments, among them helping derail Trump’s controversial nomination of Andrew Puzder for Labor Secretary.) But for Moser, it was only the start of an unexpected trajectory. Within a few months of Trump’s inauguration, she had moved back to Texas’s 7th District, which encompasses a stretch of Houston’s suburbs, and announced her campaign for Congress.

Moser is from the 7th District. While she faces steep chances there, she also sees opportunity. In the presidential election, the traditionally conservative district swung to Hillary Clinton over Trump by a margin of 1.3 points.

The Forward spoke with her over the phone.

Talya Zax: Can you give me some background on your career, political and otherwise?

Laura Moser: I’ve basically worked as a journalist and a writer. I have two little kids so I did my assignments while being the primary caregiver of my kids. My husband [videographer and political consultant Arun Chaudhary] worked for President Obama early on in his first presidential campaign and then went to the White House and stayed for several years.

How did you decide to run for Congress?

Well, I started Daily Action about a month after the election. Everyone I knew on my Facebook feed was terrified all the time, and I felt like there was this need for this easy activism tool that could give people ownership in their government without being all-consuming. Very few of us can stop our lives and become activists. I felt like I’d hacked into something that a lot of Americans are experiencing. I wanted to take it to the next level. I happened to be from this Congressional district that voted for Hillary, a lot of split-ticket voters here. They elected the same really right-wing Tea Partier to Congress. There are only 23 districts in the country where that is the case, and we really have to win all of them. And I thought since I have this background, a record of proven activism, that I was in a unique position. I’ve never wanted to be in politics before, [but] the Senate healthcare panel is 13 men, and I’m just kind of tired of men making decisions about everything. So I just thought, why don’t I try? I want my kids to be proud of me, I want to be an example to them. If I’m not happy with what’s going on, I try to change it myself.

Can you give me a preview of your campaign? What issues do you intend to focus on?

The main issues that are the most important here [include] infrastructure. Five of the 11 fastest-growing cities in America are here in Texas — Houston is definitely one of them, and there’s no real infrastructure plan. There’s no extension of public transportation in the way that Houston needs. There’s also flooding; we’ve had two years in a row of massive floods, because they haven’t developed the city appropriately. We really need federal funds to prevent that. Houston’s one of the most diverse urban areas in the entire country, and most people here are really proud of that. My grandfather was a refugee from Nazi Germany and this is where he came. I think they have more Syrian refugees than anywhere in the country. My husband is finding that it’s a kind of fascinating urban environment because of that, and that is something I want to fight for, to take pride in that diversity rather than turn away people based on where they were born. Women’s health issues are obviously very important to me, and they’re under attack here as they have been for years. Texas and Kansas have the most abortion laws based on the least amount of science. People are looking for common sense solutions, things that will help the city grow responsibly. 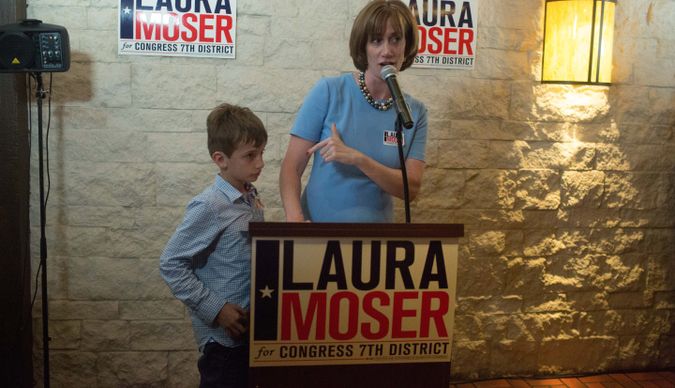 And what are your first steps in establishing your campaign?

I’m going out in the community and trying to meet as many people in as many different parts of the district as I can. I’m trying to raise money, obviously. Texas is a quote “non-voting state.” I would love to say I’m just going to go get every single person who’s never voted; that’s a really expensive endeavor that lots of people have tried, so I’m just out there trying to meet as many people as I can. There’s a lot of new activists since the election, Indivisible is really big here. I’m going to try to show up.

What challenges do you see facing your campaign?

The work-life balance with my kids. My husband has stepped up and taken the lead role with our kids, which is really great for my kids to see, because I would like to say that we had a 50-50 [arrangement] sharing duties, but we didn’t, and now we’re approaching parity. He’s probably doing more right now. My kids have been the main thing in my life for the last 8 years, so we’ll se how it all shakes out. For me, it is an advantage to be seen as like a mother and a multi-tasker, because I’m really good at doing a lot of stuff, like I’m picking up my child’s room while I talk to you. That is a skill that you develop as a mother, and it’s really useful in any larger endeavor that you undertake. In this district in particular, I think that the swing vote is women and mothers who probably are in lots of ways conservative, but I hope, I think that there is a crossover of people who have kind of had enough with the extremist side of the Republican Party. So many of the reasons that I’m doing this are for my kids. I found out I was pregnant the morning Obama was going to accept the Democratic nomination and I bought a pregnancy book on the way to the speech. I felt like we were on the upswing as a country, and now I feel that that premature optimism on my part. I definitely don’t think I would want to do this if I weren’t a mother. When I gave my announcement speech my eight-year-old came up to the podium while I was talking. Hillary had a different problem, a different challenge, which was that she’s seen as too business-like. She was trying to bring the mother-grandmother thing to soften whatever image other people had made of her.

Can you tell me about your Jewish background?

I’m Reform, but I went to Hebrew school every Tuesday and Thursday and Saturday school every Saturday. So much of my Jewish background is here. I’m still working out the best temple for my kids. My son actually loves Hebrew school. (I did not.)

Will you continue running Daily Action? What are current plans for its future?

I have left officially. I have divested, unlike Donald Trump. It’s just too complicated to do both. But my partner John Burton – who’s the smartest person I know – he was doing this while working another important job and he quit his job, so now he’s doing this full time. We have a great employee, a digital strategist. I couldn’t possibly do both. One of the great things about Daily Action is that even though it wasn’t in-person I met so many people every day, either in my Facebook inbox or my direct email account, people just writing about who they called today, who hung up on them, what they told this senator. I also accidentally got text messages that said I want to break up with you, this isn’t working; I was like, uh, you responded to the wrong number. It was a gentle community, so I miss that, but I’ve been out there meeting people every day and talking to people in person, and [the campaign] is really just a nice extension of that. That’s kind of the in-person Daily Action interaction. Since I’m a writer, it’s so different from being at the computer all day, and that’s what it was with Daily Action. I’m kind of a classic extrovert so I’m wondering why I spent all these years at the computer when I could have been having more face time with people.

The Washington Post ran an article about your work with Daily Action that mentioned you got help from other mothers in running Daily Action. Do you feel like there’s potential, in this moment, to tap into previously underutilized communities politically?

In terms of this particular district, there’s certainly a lot of untapped communities. For the resistance in general, we did a poll of our [Daily Action] users and it was 86% females between age 35 and 65, which is a large bracket. And I do think, again, that’s the swing vote in this district too. There’s just a lot of women who are becoming more involved. Another thing in Texas is that people vote in vastly higher numbers in presidential years, but some years in this district, which has about 725,000 people, only about 9,000 people have voted in the Democratic primary. The gamble I’m making, and other people are making, is that people are really angry, and they’re paying more attention than they have before.

How has your work with Daily Action shaped your thinking about your forthcoming campaign?

The main thing for me has been sort of operational, which is that having an idea and executing it can make a difference. The biggest lesson from Daily Action for me was that if you’re just some regular person and you have an idea you can actually shut down the government, not like in a Ted Cruz way. When the Muslim ban was announced we did 11,000 calls to airports all over the country, and by that night Customs and Border Protection released numbers on how many people they were holding. That’s kind of what the move from Daily Action to this is. It’s the theme that a citizen who’s committed can make a difference. I learned that in elementary school, but this is the first time I’ve felt the power of that.