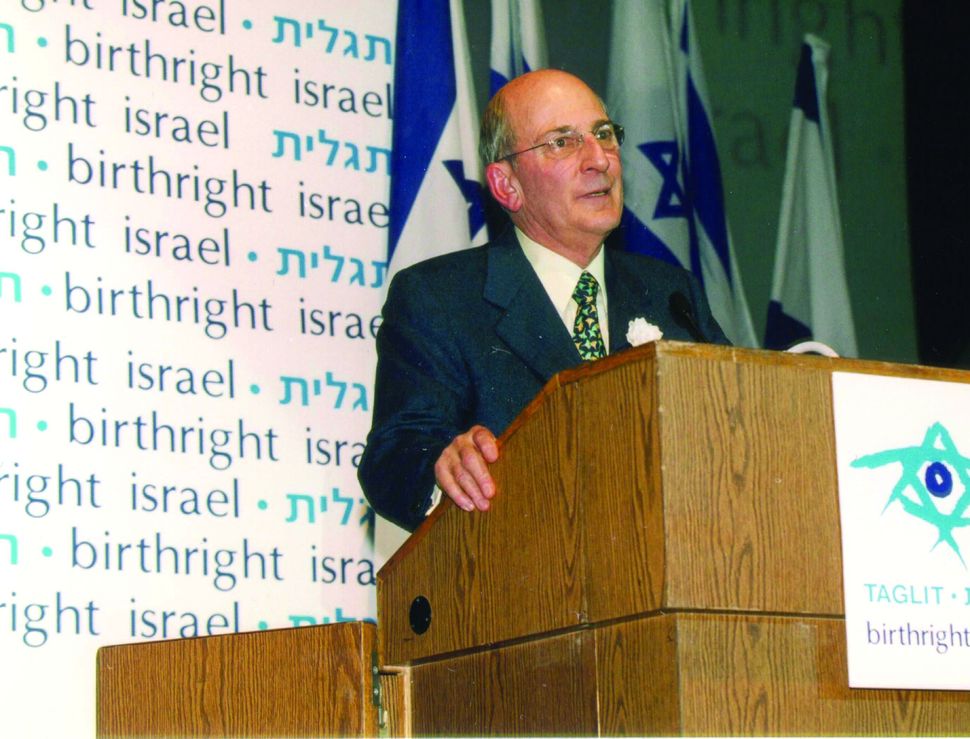 Distilled: A Memoir of Family, Seagram, Baseball, and Philanthropy

By Charles Bronfman with Howard Green

Charles Bronfman is one of North America’s most important Jewish philanthropists, so a new autobiography is worth a look. And, since his philanthropy is built on whisky and generally designated for progressive causes, it’s of special interest to me as the Forward’s whiskey correspondent.

The three things I was looking for in “Distilled” were: the influence of the liquor industry on his life and work; an account of the family schism over the loss of Seagrams; and how Bronfman himself thought about his philanthropy.

One thing that I wasn’t looking for, but was happy to read, was the history of the Montreal Expos. The subtitle of the book is “A Memoir of Family, Seagrams, Baseball, and Philanthropy” and Bronfman touches on baseball and the three other topics with the help of his co-author Howard Green.

Bringing the Expos to Montreal is one of the few things that Bronfman claims significant credit for in the book. It certainly seems like the one he actually enjoyed the most. Because, on the one hand, “Distilled” — like many late-life autobiographies it an act of conciliation — making peace with friends, family and his own actions and inactions. But, on the other hand, the book is a supremely brave account, listing and detailing a lifetime of Bronfman’s own manifest faults and dependencies.

The youngest of four siblings, Charles Bronfman — according to this autobiography — sees himself as an angry and weak personality who belatedly grew into his place as a philanthropist. From an early age he was a “basket case” who had some traumatic childhood experiences, rarely, though, taking his privilege for granted.

Swayed by the stronger characters around him, whether his father, his brother, or business allies like Jack Duffy or Leo Kolber, Charles portrays his virtue as being strongly in support of others. Later on he would strongly support his powerhouse wife Andrea in her love of Israel, Jeffrey Solomon as head of the Andrea and Charles Bronfman Foundation and Michael Steinhardt in his Birthright vision.

Beginning as an immigrant to Saskatchewan, Sam Bronfman (Charles’s father) started as a hotel owner before focusing on building the Seagrams whisky empire into a multi-billion dollar business. Leaving his two sons 30% each and his daughters 20% each of the business, Sam effectively handed Seagrams to Charles’s older brother Edgar Sr. who presided over the business from 1971 to 1994 before, in turn, handing over to his son Edgar Jr.

By most accounts, Edgar Jr. then proceeded to lose the family business — as well as billions of dollars for the family — in a series of ill-advised business deals. “Distilled” gives Charles a chance to talk about his nephew’s decision to use Seagrams for leverage to enter the entertainment industry — against Charles’s wishes. It was a decision that wiped out at least half the family’s wealth as well as family ownership of Seagrams. What would Charles, now 86, and with nothing to lose, say about that?

Not much, as it turns out. Charles opposed the sale, but he didn’t have the guts to risk a big family argument to oppose what he suspected would be a big mistake. So, he now writes, he feels that he was somewhat to blame and his brother and nephew were seriously to blame but he tells readers little about the decade since the debacle except that he made peace with his brother Edgar before his death in 2013. And that he now has spoken to Edgar Jr. on important family occasions.

Family, business and Seagrams are generally lumped into one category. They are considered, but not deeply analyzed. Charles seems to think that he wasn’t great at any of the three but has tried to become better at the first and move out of the second into philanthropy, especially given the loss of the third. He refers to Seagrams — the family’s achievement and its livelihood for most of the 20th century — as a cozy “blanket” for the family that was rudely lost, and he clearly feels it as a symbolic loss paralleling that of his father.

Largely dismissed by Edgar Sr. and with no real connections to his sisters Minda or Phyllis, Charles constantly describes himself as a people person. But, perhaps out of sincere fairness, he explains how unpleasant he was to his first two wives. Barbara, the mother of his children, divorced him and, though they are friends, he assures us she “[d]oesn’t want me back.” Andrea — his great love — “built [him] a backbone” before she was tragically killed at the age of 60 while walking their dog Yoffie. But, he writes, even she joked of leaving him.

Unfortunately the last few years of our marriage were difficult and there were things that were left unresolved, in part due to the stresses surrounding her illness, but also because, in spite of my nice-guy facade, I still carried a certain anger from my youth that hadn’t fully dissipated.

Since Andrea’s death in 2006 he has married twice again (to Bonnie Roche and then to Rita Mayo). Even in his 70s and 80s he’s simply “unable to live alone.”

This “people person” clearly craves approval, and it’s easier to be liked when you are giving away hundreds of millions of dollars than it is when you are doing business — and even easier with a significant prize in your name. (Charles has one, created by his children, in 2004 awarding $100,000 to one person under 50 each year who is beginning to achieve something of significance toward social change). But this is no bad option for a billionaire and Charles has been clear about his aims, and has worked hard at leveraging his own money with others so the funding becomes even more effective.

He’s proud of his cultural contributions to Israel, and of his Karev foundation (a Hebrew acronym of his initials which also means “Bring Closer”) that enables inclusionary education programs in Israel. He’s proud of Historica Canada, the organization he helped create to promote Canadian unity, pride and national history. Tellingly, of his contributions to North American Jewish culture, he gives significance only to Birthright Israel — the program that has taken hundreds of thousands of young Jews to Israel. The only significant and specific discussion of the Andrea and Charles Bronfman Foundation comes to explain why it is sunsetting.

Maybe it’s churlish to expect some more significant analysis from someone who’s done so much good for the world. Did he really achieve the most he could — either personally or globally — for someone who had a billion dollars he wanted to give to the world? Maybe so. Maybe not. In the end, though, it’s clear how he measures his achievements — he feels like he would have pleased his father.

“I have never had his [Sam’s] vision, but the kid who started out as a sickly, scrawny basket case has evolved into a contented, accomplished man with more friends than he can count. I have a wonderful life.”