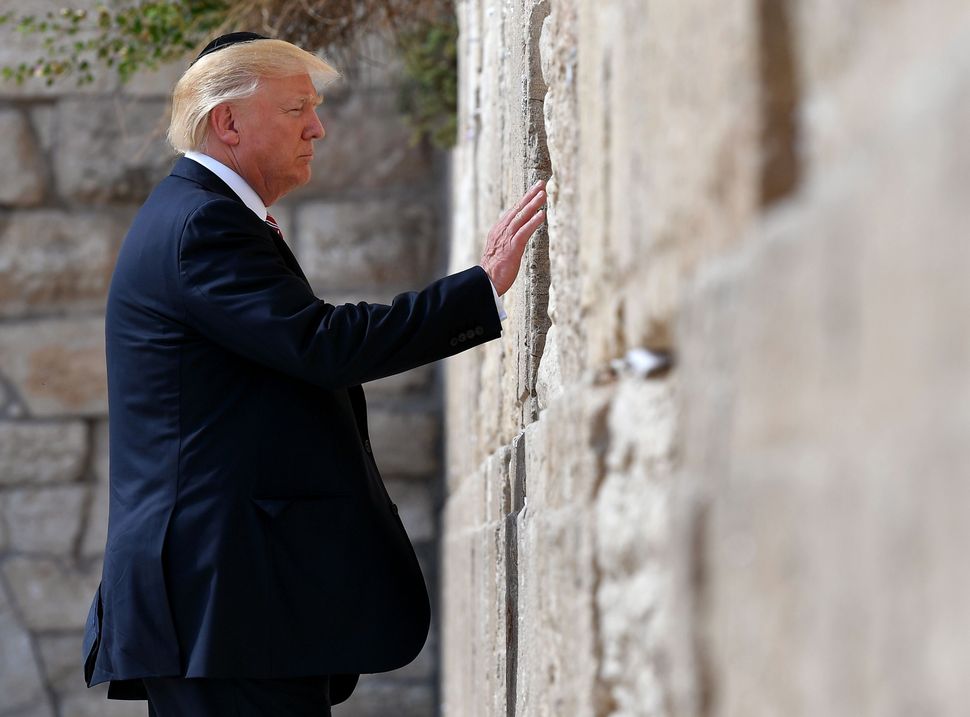 I am an incurable saver of newspapers, and I just couldn’t throw out Israeli newspaper coverage of Donald Trump’s visit to Israel. Something in the language gnawed at me, and now I know what it was: the invocation of Jewish text and tradition to describe an American president who is the most divisive in recent history. Worst of all, the words used to describe Trump in certain corners of the Israeli press are the same words that Jewish prayers and poems use to describe God.

Consider the headline of Israel Hayom, a right-wing newspaper backed by Las Vegas billionaire Sheldon Adelson and distributed free throughout Israel. “Yedid BaKotel,” it blared. Translation: A friend at the Kotel. A friend at the Western Wall. At least that’s what yedid means in contemporary spoken Hebrew.

But that surface translation doesn’t explain the whole truth.

“Yedid,” for those who spend time in synagogue Friday evenings, immediately recalls the 16th-century poem “Yedid Nefesh,” which is sung each week as Shabbat enters, and describes the relationship between God and the people of Israel. “Yedid Nefesh” was composed by Rabbi Elazar ben Moshe Azikri, who was born in Safed after his family fled Spain. It begins with the line “Yedid nefesh av harachaman,” or “Beloved of the soul, merciful father.” In other words — God is beloved, a merciful father figure, a true friend.

On Israel Hayom’s front cover, the words “Yedid BaKotel” appeared just below a graphic of an American flag and an Israeli flag. I took a copy from the enthusiastic red-clad employees waving at me as I waited in line to enter Tel Aviv University (in Israel, there is a security check at the entrance to any campus).As I waited, I noticed that the front page proudly declares a circulation of 275,000. Wikipedia says the Friday circulation is 550,000, making Israel Hayom’s Israel’s largest-circulation paper.

But the students waiting with me weren’t interested, and the red-clad newspaper employees were having a hard time giving it away. Still, taking the bus home, I noticed many well-worn copies. Someone is reading this stuff, making associations between Trump and yedid, or even yedid nefesh.

It’s scarier when one considers that the language of yedid nefesh offers three ways of envisioning the God-man or, specifically, God-people of Israel relationship: father-child, ruler-servant and man-woman.

Meanwhile, Yediot Aharonot, a mainstream newspaper that generally tilts right in its editorial views, ran the same ubiquitous photo of Trump in his black-suede yarmulke, touching the Kotel.

Yediot’s word choice in its headline has also been haunting me. “Anachnu ba’alei brit,” it said. The dictionary definition? We are allies.

But that’s just the surface. Here again, it’s hard for anyone with a strong Jewish background to see the word brit, or covenant, and not think of the covenant between God and the people of Israel detailed throughout the Bible. It’s also hard not to think about the brit bein hab’tarim, the covenant between God and Abraham, and of course, the brit milah, the circumcision ceremony.

Predictably, left-leaning Ha’aretz was more skeptical of Trump. The paper’s Chemi Shalev intriguingly described Trump as the most Israeli president yet — in the way Israelis like to see themselves: blunt, tough, decisive. Rereading the coverage of the visit, I realized that right-wing Israeli media, by invoking references to Jewish texts, is part of that strange impression of Trump as “Israeli”: Readers can get lulled into the sensation that Trump is a yedid and a partner to a covenant, and possibly the divine covenant between God and the people of Israel. And as a bonus he has Jewish grandchildren and poses for photos at the Western Wall.

That’s a dangerous line of thinking, as those who forked over cash, votes and support in the belief that Trump sees things just like them have discovered, or will discover. For American voters, the illusion that Trump understands them can cost health care and national dignity; for Israelis, the willingness to believe Trump, and to believe in Trump, including his photo ops at the Wall, can be a colossal mistake with geopolitical consequences — and the parameters of that mistake are not yet clear. In the meantime, it’s bizarre to read yedid as a description of a man who resurrected an anti-Semitic rallying cry in his “Make America Great Again” campaign theme, and it only gets weirder and more skin-curdling on each rereading.

In the time since Trump’s visit to Israel, who he is — and who he is not — has only become clearer, as former FBI director James Comey’s riveting testimony taught us all. The man who fired James Comey is no yedid and no partner to any sort of brit. And every day seems to bring new reversals on previously uttered statements.

Trump voters are learning that his campaign promises were not covenants. Unfortunately, the only person this president seems to be keeping covenants with is himself.

Aviya Kushner is the Forward’s language columnist and the author of “The Grammar of God (Spiegel & Grau, 2015). Follow her on Twitter, @AviyaKushner