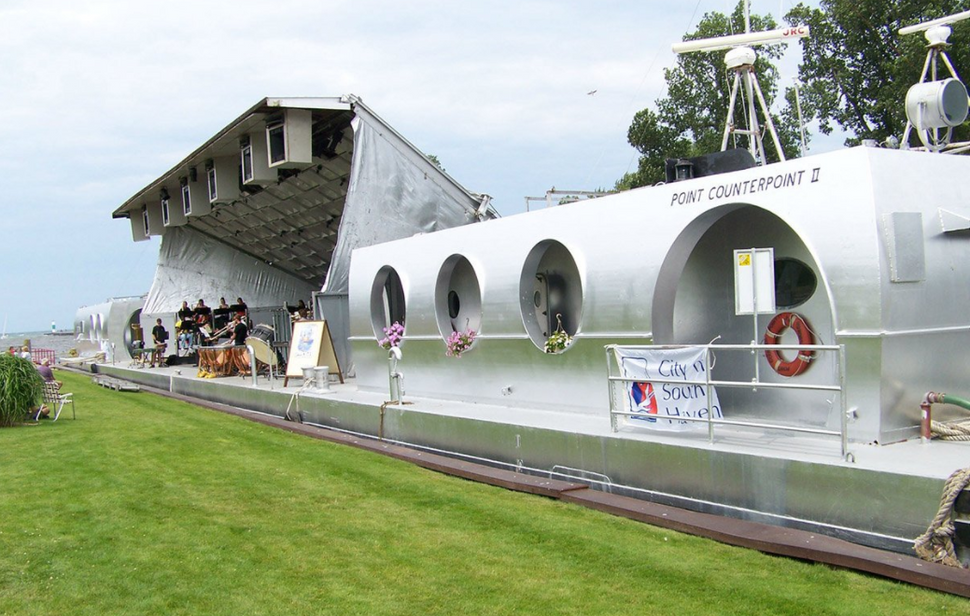 “How important is your thumb on your right hand?” Richard Saul Wurman asked, before he answered his own question: “It’s not as important as your whole arm, or your lungs.”

“Lou’s reputation as a great architect will live without this boat. But it’s really nice that it is recognized.”

Wurman, an author, architect and founder of the TED conference, was speaking with me over the phone about an unlikely subject to recently make the news: Louis Kahn’s music boat for the American Wind Symphony Orchestra, “Point Counterpoint II.”

Kahn, a Philadelphia-based Jewish architect best known for Dhaka’s Parliament Building in Bangladesh, the southern California Salk Institute, and the Yale Art Gallery, passed away in 1974. The boat, which captain and conductor Robert Boudreau commissioned from Kahn in the 1960s, has hosted performances across the waterways of the United States and Europe, as well as in the Baltic, Irish and Caribbean seas. Now, as Boudreau enters his nineties, if he can’t find the boat a new home it will face destruction.

Those facts might have remained hidden had it not been for the cellist Yo-Yo Ma’s impassioned plea, in the New York Review of Books, for the boat’s salvation. “It sails as a powerful, living testament to American creativity and to the elemental role that culture plays in human life,” Ma wrote.

Wurman has a unique appreciation for that testament. After all, “Point Counterpoint II” had, as he said, “a younger brother.” Wurman, almost immediately upon entering Kahn’s employment in his early twenties, oversaw that earlier boat’s construction.

That boat, which Wurman said went unnamed, was built for England’s River Thames. Also constructed as a platform for the American Wind Symphony Orchestra, it played concerts along that river from London’s Battersea to Oxford’s Christchurch Meadow.

“The boat pulled up to the shore, and you were on the land and heard the concerts,” Wurman said. “I thought it was fine. We had a good sounding board and good lighting. And a wind symphony has really good sound from it; it’s not subtle.” But “Point Counterpoint II,” which he believe he saw once in New Haven, was “much better, much more beautiful, much more complex, lovely.”

“To me this boat has two major significances in Louis Kahn’s life,” said Wendy Lesser, who published “You Say To Brick: The Life of Louis Kahn” earlier this year. “One has to do with boats, and the other has to do with music.”

Kahn’s ventures as a shipwright were constrained to his two music barges. But his early life was shaped by boats and water. Born on the Estonian island of Ösel, he was, Lesser said, constantly in contact with boats.

At 5, Kahn immigrated to the United States. On a ship from Liverpool to Philadelphia, Lesser said, he drew pictures of the other boats that passed.

“The captain apparently liked his picture so much that they got oranges for the rest of the trip.”

As to music: Kahn’s mother was a harpist, and while Kahn himself never learned to read music, “he could reproduce almost any tune that he heard on the piano.” As a teenager, he employed that skill as a musical accompanist at Philadelphia movie theaters, earning much-needed income for his family. And, Lesser said, he enthusiastically performed at social gatherings, taking to they keyboard at dinner parties until “the month before he died.”

In the 2003 documentary “My Architect,” Nathaniel Kahn, one of Kahn’s three children (by three different mothers, a story for another time) visited Boudreau on “Point Counterpoint II.” The boat was sleek, futuristic, patterned with vast round windows: “People say ‘this thing’s from Mars!’” Boudreau exclaimed. Musicians occupied the ship like a jungle gym, some practicing in indoor practice rooms, and the rest on any free surface available on its deck. Later, as they gave a concert from its opened stage, purple lights lit the face of the barge, and fireworks capped the performance. There was something of the pageant to it, a free-spirited entertainment that felt, despite its European origins, entirely American.

Luckily for fans of the boat, it may yet survive. After Ma’s plea became public, officials and activists in the New York town of Kingston, which plays host to a thriving arts community on the banks of the Hudson River, contacted Boudreau about buying the boat. An initial meeting went well, the Kingston Daily Freeman reported — although the city’s path to purchase has been complicated. Boudreau’s boat, which he thought might be an unsellable burden, has become a hot property: Bids for “Point Counterpoint II” have risen to over 3 million dollars. And The Washington Post’s architecture critic recently argued that the boat belongs in Washington D.C.’s Potomac River.

For Kahn’s advocates, the increasing likelihood that “Point Counterpoint II” will avoid the scrapyard is good news.

“It’s very, very important to save every piece of Louis Kahn’s architecture that still exists, because he didn’t finish many things,” Lesser said.

And Wurman, who thinks the boat’s English predecessor rusted — “that boat died,” he said — sees the boat as a symbol for Kahn’s place in the canon of American architecture.