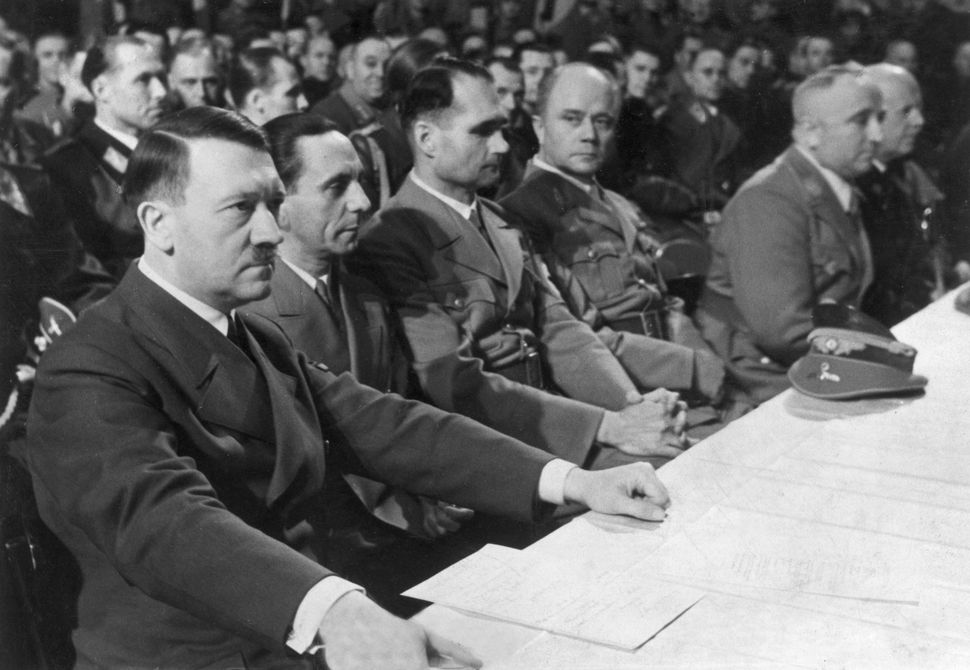 The blatant anti-Semitism of the Charlottesville riots and the alt-right are chilling, but rest assured: the Nazis have always hated uppity New York Jews.

In the 1930s, many German authors frequently praised American policy while criticizing Jewish influence. In his 1935 book USA Lernt Um! (USA Learns), Johannes Stoye praised FDR’s New Deal in one breath and denounced how the “great influence of the Jews” made New York institutions the home of an unparalleled “radicalism” that had “very little to do with America” in the next.

Nazis hated the radical chutzpah of the New York Jews so much they used us, not European Jews, as the scapegoat for enacting the first of the terrible Nuremberg Laws, which established the iconic Hakenkreuzflagge, a blood red flag bearing a swastika, as the official flag of Nazi Germany.

On July 26th 1935, as the Forverts reported, a group of “2,000 anti-Nazis, communists, Catholics and sailors,” protested the fact that Americans were travelling on the Bremen, a Nazi ship, to Germany and tore down the swastika-bearing flag from the ship’s mast. A detective on site, Matthew Solomon, “forced to choose between his duty as a policeman and his own sympathies as a Jew,” tried to maintain the peace and was beaten by the rioters. The German government was furious and sent a statement of protest to the State Department. Though the U.S. government expressed regret, they stood with the NYPD and noted that the ship owners had been warned but did not take adequate precautions against rioters.

On September 6, a low-level magistrate of Lower Manhattan, Louis Brodsky, took bold action and decided to release the rioters.

Brodsky’s opinion did not mince words. He wrote that the Nazi flag “symbolizes all that is antithetical to American ideals of the God given and inalienable rights of all peoples to life, liberty, and the pursuit of happiness… [it is] an atavistic throwback to pre-medieval, if not barbaric, social and political conditions.”

In the 1930s, the German right was embroiled in a great power struggle. As James Whitman, a professor at Yale Law School, writes in “Hitler’s American Model: The United States and the Making of Nazi Race Law,” “In September 1935, as the Nuremberg ‘Rally of Freedom’ approached, the Nazi takeover of Germany was not yet symbolically complete. During the early period after Hitler’s ascent to power in January 1933, the Nazi Party was forced to share authority with other right-wingers: nationalist conservatives…men who detested the democratic ways of the Weimar Republic, and who were willing to cooperate with the Nazis, but who maintained a degree of distance from the Nazi Program.” The course of history would prove their milquetoast approach to be inadequate. But during this time, two German flags flew together: the historic German flag, with its black white and red bars, and the Nazi flag with its culturally-appropriated swastika. As long as both flags were flying, the “fine people” of Germany possessed a semblance of moral wiggle room.

But the Brodsky affair gave the Nazis a perfect opportunity to cement their power. In 1935, as Peter Longerich, a leading German authority on the Holocaust, notes in Politik der Vernichtung (Politics of Annihilation), on September 9th, the fearsome minister of Nazi propaganda Joseph Goebbels wrote in his diary, “Judge Broudski [sic] insults the German national flag…Our answer: In Nuremberg, the Reichstag collapses and declares the Hakenkreuzflagge the sole national flag.”

Just 9 days after Brodsky released the Bremen 5, the dreadful Nuremberg Laws were passed at the Party Rally of Freedom — and the first one was the Reichsflaggengesetz, Flag Law for the Reich, which established the infamous Nazi flag as the sole flag of Germany for the duration of Nazi rule. An insult from a Jew was too much to bear.