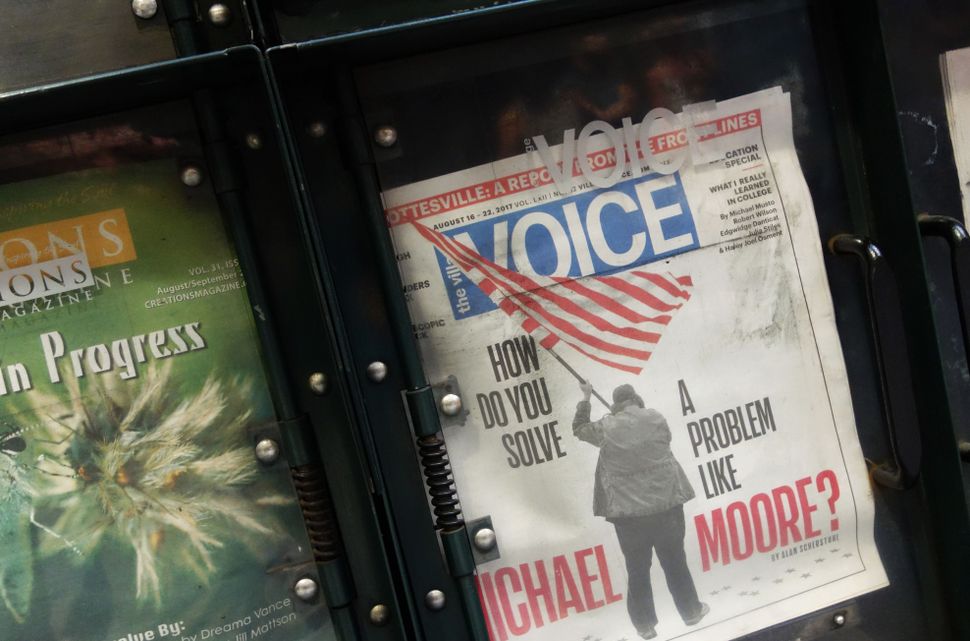 To the distress of many, iconic New York City weekly newspaper The Village Voice announced this week that it will cease producing a print issue.

While a date for the final print issue has yet to be confirmed, the paper’s imminent absence from city newsstands sparked a keen mourning for what it once had been.

“The print pages of The Village Voice were a place to discover Jacques Derrida or phone sex services, to hone one’s antipathy to authority or gentrification, to score authoritative judgments about what was in the city’s jazz clubs or off off Broadway theaters on a Wednesday night,” wrote The New York Times’s John Leland and Sarah Maslin Nir.

“In the latter part of the last century, before ‘Sex and the City,’ it was where many New Yorkers learned to be New Yorkers.”

So while the Voice still occupies its iconic red and blue newspaper vending machines, look back on some of its most memorable achievements in print journalism.

Mailer, who co-founded and named The Village Voice, wrote a column that may be notable less for its journalistic excellence than its author’s eventual acclaim. In 2007, The Voice reprinted Mailer’s first column, titled “Quickly: A Column For Slow Readers,” in which his trademark arrogance was on proud display.

“I also feel tempted to say that novelists are the only group of people who should write a column,” Mailer mused. “Their interests are large, if shallow, their habits are sufficiently unreliable for them to find something new to say quite often, and in most other respects they are more columnistic than the columnists.”

While Mailer’s column lasted only four months — he quit, alleging too many “typographical errors in his column” — he left a lasting impression. He promised to be an “assassin-and-lover columnist;” quite the voice, indeed.

Hentoff joined the voice in 1958. “There was no pay at first, but the Voice turned out to be a hell of a resounding forum,” he reflected in his last column for the paper, published after he was laid off in 2009.

A proud, self-identified “civil libertarian,” over the years, Hentoff wrote with fury on racial discrimination in the unions of the early 1960s — once a “furious labor partisan,” he wrote, “Now, organized labor is like organized Zionism — self-canonized” — scoured New York mayor John Lindsay in 1968 for refusing to take a strong stance against police brutality, and delivered a poignant plea for defense of the Bill of Rights following the 9/11 attacks.

Hentoff, a prolific jazz critic who also wrote for publications ranging from The New Yorker to Down Beat magazine, was given the National Press Foundation’s award for lifetime achievement in contributions to journalism in 1995. Nine years later, he was the first non-musician to be declared a Jazz Master by the National Endowment for the Arts

If you were introduced to Jules Feiffer through his illustrations for the beloved 1961 children’s book “The Phantom Tollbooth,” his strip in The Voice might have surprised you. Feiffer started writing the weekly strip in 1956 under the title “Sick, Sick, Sick,” later changed to just “Feiffer;” by 1959, his cartoons were nationally syndicated.

“The prototypical Feiffer strip features a character — man, woman, boy, girl, or politician—staring point blank at the reader, explaining his dilemmas or justifying his actions, ironically, bitterly, ingenuously, mendaciously, or, as often as not, in a state of confusion,” Gary Groth wrote in the introduction to an interview with Feiffer for “The Comics Journal.”

Feiffer tracked his instinct to create satire back to his time in the United States Army, which began in 1951; while there, the abuses of authority he witnessed filled him with rage. “If you’re angry, and express that anger in a tantrum, or a polemic, then nobody’s interested, including yourself,” he observed to The Atlantic. “So you have to find a misleading way—a satiric and comic way—to make your points.”

In some of his earliest strips, Feiffer skewered both the chilling lack of compassion central to a certain breed of American capitalist mentality and the selfishness inherent in seeing oneself as ignored by society. His universally critical eye was revolutionary in cartooning, and oh-so-well-suited to The Voice’s penchant for daring countercultural critique.

4) Allen Ginsberg’s elucidation of the Beats

Ginsberg was both a subject of and contributor to The Voice, in each role giving clarity and insight to the often-mystifying Beats with whom he was associated.

“‘On the Road’ was written around 1950, in the space of several weeks, mostly on benny, an extraordinary project, sort of a flash of inspiration on a new approach to prose, and attempt to tell completely, all at once, everything on his mind in relation to the hero Dean Moriarty, spill it all out at once and follow the convolutions of the active mind for direction as to the ‘structure of the confession.’”

A mystifying sentence construction with a clear message: Beat prose, at its best, was “An attempt to trap the prose of truth mind by means of a highly scientific attack on new prose method.”

In a 1967 article by Don McNeill, Ginsburg the subject mused on the difficulties attendant to the much-fantasized idea of revolution.

“I imagine that it could happen here, but somebody has got to do it. I’m not going to,” he said.