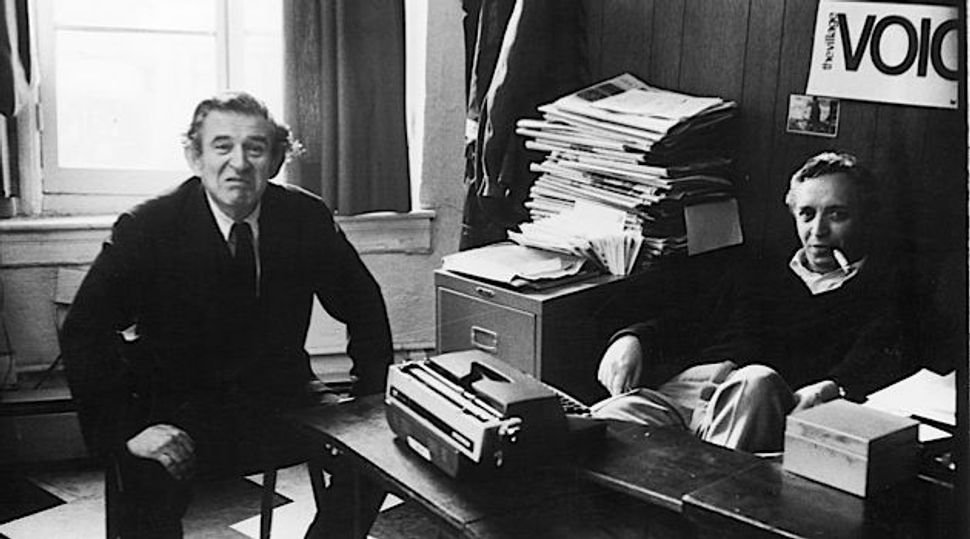 For much of its existence, the Village Voice was a paper where you could call a momzer a momzer and use just that term to do it. But the news in May that the out-of-town momzers who own the Voice had fired the paper’s last remaining signature writers — Michael Feingold, Michael Musto and Robert Sietsema: idiosyncratic, underground types all — effectively brings down the curtain on one of the most distinctive institutions in the history of New York journalism.

How Jewish was the Village Voice?

Well, New York’s countercultural paper of record was founded in 1955 by Brooklyn-born Jewish novelist Norman Mailer, Jewish political activist (and eventual senior adviser to Mayor Ed Koch) Dan Wolf and Edwin Fancher, a psychologist whom Wolf met in 1946 while standing in line to register for classes at The New School for Social Research under the GI Bill. Allen Ginsberg, Lenny Bruce, and Bob Dylan were all Voice heroes at one time or another. Tuli Kupferberg, the Beat poet and indefatigable member of the underground rock group, the Fugs, regularly contributed letters to the editor.

As for me, among the first articles I contributed to the paper was a 1976 piece on the revival of Yiddish-language talkies; among the people I interviewed was the great Yiddish actor Jacob Ben-Ami, then 87 and living alone in small apartment in the West 90s. For all I know it may have been his last interview. (He died the following year). 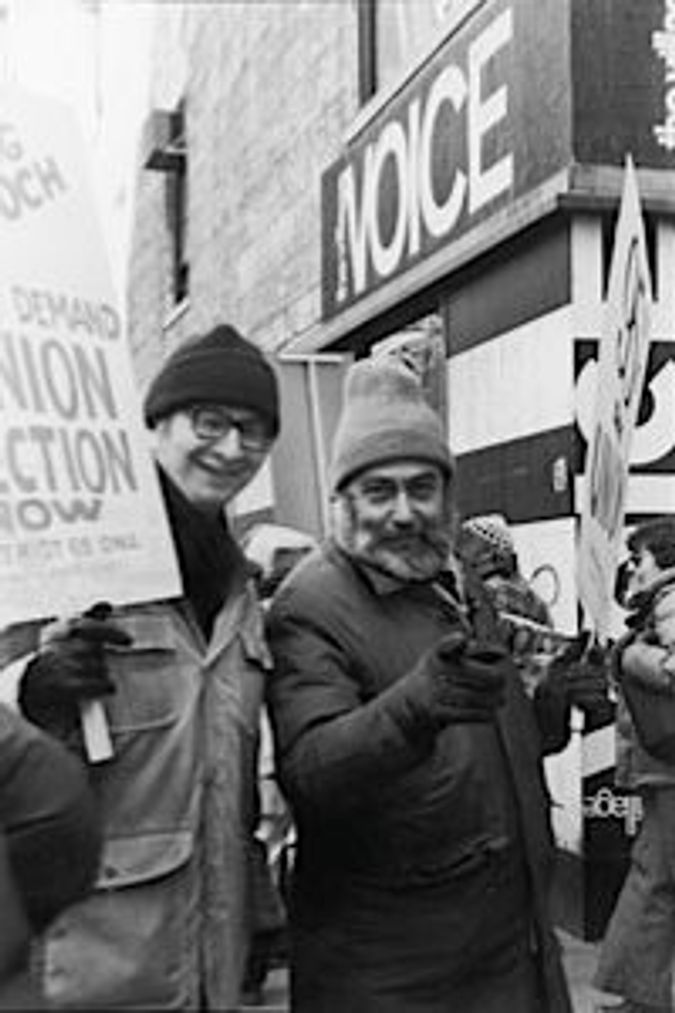 Ben-Ami was slightly grumpy regarding all Yiddish talkies — including “Grine Felder”— which he co-directed with Edgar G. Ulmer, as shund, or mere pulp. He was also a little discombobulated. At the end of the interview, he asked me what paper I was from. I told him, and he said, “Oh, the Vilna Voice.”

I liked that, and so did my Bronx-born editor, Richard Goldstein, the world’s first regular rock critic and, in newsroom parlance, my “rabbi” (the guy who brought me into the Voice). Goldstein made my story the lead arts piece. It started on the back cover, as was the practice in those days under Clay Felker, its celebrated owner. Goldstein even lifted a line from my description of “Grine Felder” to give the piece a quasi-Yiddish headline: “When ‘Shayneh Maydelehs’ Roamed the Silver Screen.”

Tellingly, there were actually readers who corrected our incorrect conjugation of the Yiddish plural. The Voice prided itself on its mastery of hipster slang. You could use Yiddish (or Kitchen Yiddish) with impunity in those days, although not, as rule, the transliteration from the YIVO Institute for Jewish Research. Instead, fact checkers actually had a copy of Leo Rosten’s “The Joys of Yiddish” alongside their French and Spanish dictionaries. Rosten was the Voice’s arbiter of Yiddish usage.

At once provincial and cosmopolitan, the Village Voice of the 1970s, ’80s, and ’90s was Jewish the way New York City was Jewish — or the way the local beatniks, hippies, radical activists and miscellaneous members of the luftmensch intelligentsia were Jewish. It was a strong flavor in the paper’s ethnic stew. Most of the locally born writers (of which there were many, including myself) were either Irish lapsed Catholics or secular Jews. (Guys with consonant-rich last names, like Robert Christgau and Ross Wetzsteon, were often assumed to be Jewish — after all, they wrote for the Voice.)

Of course, not all identities at the Voice had an ethnic base. The paper had a large and vocal gay contingent and an even more outspoken group of feminists, not to mention leftists of all persuasions. We were unlike any other local publication. For me, that diversity was a great source of pride. It was also a source of great internal dissention. The Voice was a fruitfully argumentative place (something I also thought of as a Jewish form of discourse in the sense of my favorite saying, “Two Jews, three shuls”).

There wasn’t a specific Jewish beat. But, besides my license to employ Yiddishisms freely, I would write up the occasional Yiddish play, and review Yiddish books in translation. After I became the lead film critic in 1988, I was able to prioritize as I saw fit, giving a lot of attention to movies or documentaries on Jewish subjects and (related in my mind) to films from Eastern Europe. When “Shoah” was first released, in 1985, I wrote two features — an interview with its director, Claude Lanzmann, and a report on the movie’s reception. 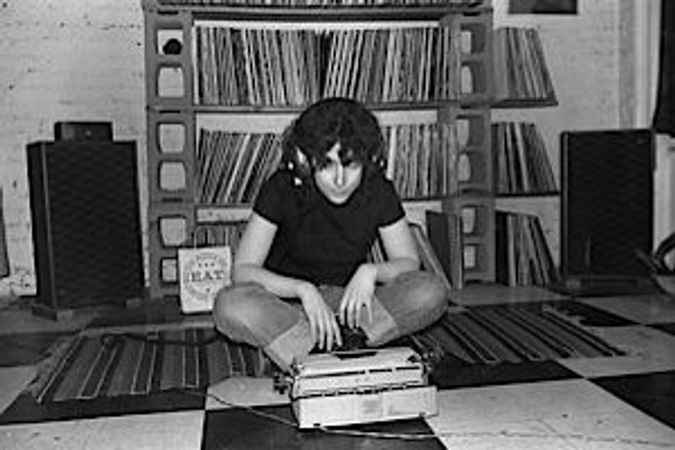 Feminist: Critic Ellen Willis wrote about politics, culture and women for the alternative paper. Image by courtesy of university of minnesota press

In those days, there was international reporting: Israel was covered, usually but not exclusively, from a critical perspective. For a while, Yossi Klein Halevi, a lapsed disciple of Rabbi Meir Kahane, served as the paper’s regular Israel correspondent. The late Ellen Willis did the occasional brilliant piece on anti-Semitism. (Let me say that hers is a voice I continue to miss. Hardly a week goes by without a political development that would inspire me to wonder, “What would Ellen think?”) Brooklyn street kid Jack Newfield was the chief muckraker and Nat Hentoff, who wrote liner notes for Dylan’s first LP, planted the Voice’s flag on the First Amendment.

In the spring of 1995, when the paper was still flush, Goldstein and Editor-in- Chief Karen Durbin came up with the idea of a yearly Jewish supplement. I got to write a piece that I really loved headlined “Artists Invent a New Jewish Tradition: Diasporama!” It was a great section, but there was no advertising base, and so the supplement proved to be a one-off.

The Voice began its decline well before it was acquired by the Phoenix-based New Times chain in 2006. But that hostile takeover truly marked the beginning of the end. I was okay for a while. Tony Ortega, the only New Times lifer to serve as editor in chief, let me write a feature on Elliott Gould and the “Jew Wave” movies of the ’60s and ’70s. He even put it on the cover. (Gould was incensed, imagining that the cover illustration was designed to make him look like Borat.) Ortega, however, was taking orders from “corporate” and was in no position to go native, so that echt Voice feature evoking the old days proved to be an anomaly. Ironically, the ascension of the New Times made me feel more Jewish than ever. To have been a Voice staffer for the first nine months of 2006 was to live under occupation.

It was clear that, even though they renamed their company Village Voice Media, our new out-of-town owners loathed the paper and its staff — and seemed frightened of New York. Thus, we suffered contemptuous overlords who instituted capricious disciplinary rules and contrived regular (if metaphoric) bloodbaths. For a time, a Voice staffer who had worked for the New Times was installed as a sort of one-man Judenrat. As the office emptied out, it became painful even to be there. Haunted by the ghosts of fired colleagues and suffering a form of survivor guilt, I had to work as if with blinders. It was a lonely situation. (Former books editor Ed Park’s novel “Personal Days” gives some of the period’s feel. Parks was first told that books were irrelevant and was subsequently fired via conference call.)

I had been involved in the creation of the Voice union back during the late 1970’s when it was acquired, however improbably, by Rupert Murdoch. We were affiliated then with District 65, a leftist, heavily Jewish local representing “distributive workers.” (Our custom-designed health care package not only included “domestic partners” of any gender — a rarity back then — but also subsidized the consumer-costly, so-called Jewish science, psychoanalysis!) I was only moderately active, mainly as a steward. But I wound up heavily reinvolved in the union once we were taken over by the New Times — who were not just downsizers, but union busters.

In 2011 I was the chief negotiator, mainly by default. Almost none of the other union stalwarts was left. The negotiations were predictably acrimonious; suffice to say that we preserved our medical coverage and less than six months later, I was “laid off.”

Most likely they would have axed me in any case; my union rabble-rousing only gave the owners an additional incentive. It also gave me a source of pride that I had long since stopped feeling as a Voice staffer. I felt like I went down fighting, and not only for myself. It was what I would consider a Jewish way to go.