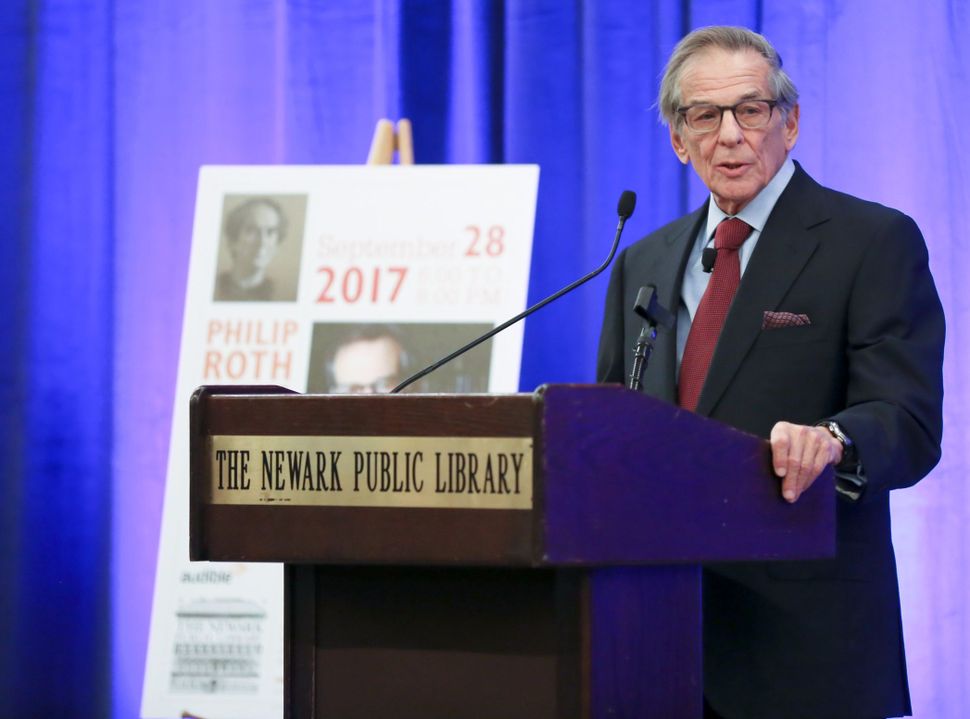 In the future, when some scholarly young Jew flirts with bankruptcy while composing an engagingly voluminous biography of noted biographer-of-length Robert Caro, he or she might note the occasion, last week, upon which Caro took to a Newark Public Library Stage to deliver that institution’s Second Annual Philip Roth Lecture.

Worth particular observation would be two details.

First, Caro chose to open his talk on presidential responsibility and civil rights with a joke about a drunk rabbi. Roth was not in attendance; Roth, surely, would have approved.

Second, in detailing President Lyndon B. Johnson’s genius in arranging the 1964 passage of the Civil Rights Act – efforts temporally parallel to certain of Roth’s own acts of genius – Caro delivered a message of subtle literary homage with great contemporary relevance.

The first achievement was presaged by the author Joel Conarroe, who introduced Caro by noting, to laughs and expressions of chagrin, that both he and Roth had been honored at the White House “by a president who reads books.”

But Caro was careful to limit his own remarks to the subject of Johnson, whose life he has chronicled, to date, in four books penned over as many decades. (A fifth book, and decade, are both in progress.)

His subject was the Freedom Summer, which, in 1964, drew crowds of volunteers – primarily students – to join black residents of Mississippi in a massive voter registration drive directed at that state’s black residents. The endeavor was scarred by violence, beginning, in its earliest days, with the murders of the volunteers James Chaney, Andrew Goodman and Michael Schwerner. Yet organizers and volunteers persevered.

“When we talk about civil rights in 1964,” Caro said, “we’re talking first of all about a group of heroes, young people who aroused the nation’s indignation over civil rights.”

But, he pointed out, the nation’s indignation had been roused before, only to subside. (Caro could not have anticipated that by the time this journalist recounted his comments, his observation would be one of renewed astuteness; mass shootings, as well as egregious violations of civil rights, result in outrage followed all too quickly by bleak acceptance.) What was different, this time, was the man in the White House.

“We talk about today, this divide in Congress, as if there had never been anything like this before,” Caro noted, “but in fact that’s not correct. What happened, really, was that the last major piece of social welfare legislation that Franklin Roosevelt passed was a minor act that got passed at the beginning of 1938. He never got another piece of major social welfare, liberal legislation passed during his presidency.”

That divide was rooted less in party than geography: Democratic Southerners held the positions of power in a majority of relevant congressional committees, and on issues of race, they held fast with Midwestern Republicans against progressing civil rights legislation.

Yet Johnson, widely thought of as one of the greatest parliamentarians ever to hold office in this country, got the Civil Rights Act through by relying on an uncommon legislative maneuver called a discharge petition. He organized leaders of the civil rights movement, union bosses and the clergy alongside the more ordinary ranks of political operatives to sway key members of Congress. Eventually, they forced Howard Smith, then Chairman of the House Rules Committee, to stop indefinitely restraining the bill in committee.

Caro’s political message, while implicit, was deeply felt: Johnson, in his work on the Civil Rights Act, was the picture of an effective and morally conscientious leader. (As Caro clarified, that position was severely compromised in other of Johnson’s presidential acts, most notably those involving the Vietnam War.) Both qualities might be seen to be lacking in the man who currently occupies the Oval Office. Given lack of the latter, we must be grateful for lack of the former. Yet lack of the pair is a tragedy for this country, allowing the suffering of communities and individuals still subject to frequent human rights violations to continue unaddressed. That lack, ongoing, might result in a disgrace like that which marked the near-century of inaction that preceded the Civil Rights Act’s passage, leading to death, discrimination and suffering the effects of which are still felt today.

In literary terms, as relates to Roth, Caro’s message was murkier. In his own career Roth has chronicled lives and eras of profound social and political disarray and pain. Civil rights themselves, however, have never been one of his particular preoccupations.

Among those preoccupations, most notably in “The Ghost Writer” (1979), is the idea that the literary resuscitation of historical figures after their deaths can clarify the needs, insecurities, wants and fears of subsequent generations. Spoilers follow: In “The Ghost Writer” Roth’s alter ego Nathan Zuckerman famously imagined, as he visited the home of a literary idol, that he had encountered Anne Frank, who had not, after all, died in the Holocaust.

The fictional prospect of a living Frank sparked in Zuckerman, a fictional young Jewish writer grappling with every aspect of his identity, with an unexpected and profound imaginative flowering. So biography, at its best, does for its readers. Obviously, famously, Ron Chernow’s biography of “Alexander Hamilton” inspired Lin-Manuel Miranda’s “Hamilton,” and in turn, a fresh political awakening in scores of Americans. And while Conarroe fantasized about Caro’s biography of Robert Moses, “The Power Broker,” on Broadway, Caro’s own aspirations tend towards a different kind of achievement.

“From the first time I thought of writing biographies, I was never interested in writing a book just to tell the life of a famous man,” Caro said. “I was always interested in trying to use the life of a famous man to illustrate the great forces of his time, particularly the force that’s political power, because I came to realize, or came to think I realized, that political power shapes all our lives.”

“When I wrote my book on Robert Moses, I didn’t really think of it as a biography of Robert Moses. I thought of it as a study in urban power, power in cities, not the power that we learn about in textbooks in high school or college, but the real, raw native realities of what power really is in cities. After that I wanted to try to do national power, and I picked Lyndon Johnson.”

Jeffrey Trzeciak, director of the Newark Public Library, told me that Roth himself had recommended that Caro deliver this year’s lecture, as he recommended that novelist Zadie Smith deliver last year’s. He declined to speculate as to why. But this author thinks that Roth, no stranger to the lessons of resurrection, might have seen Caro’s resurrections as particularly relevant to a moment in which the range of raw power attached to Johnson’s former office is in need of newly refreshed public scrutiny.

When that zealous young biographer reanimates Caro years or decades from now, concerns of power and its uses ill and good will still be relevant. They always will. But perhaps readers of that future volume will have the luxury of resembling Zuckerman, pondering a fearsome inflection point of history after it has passed.