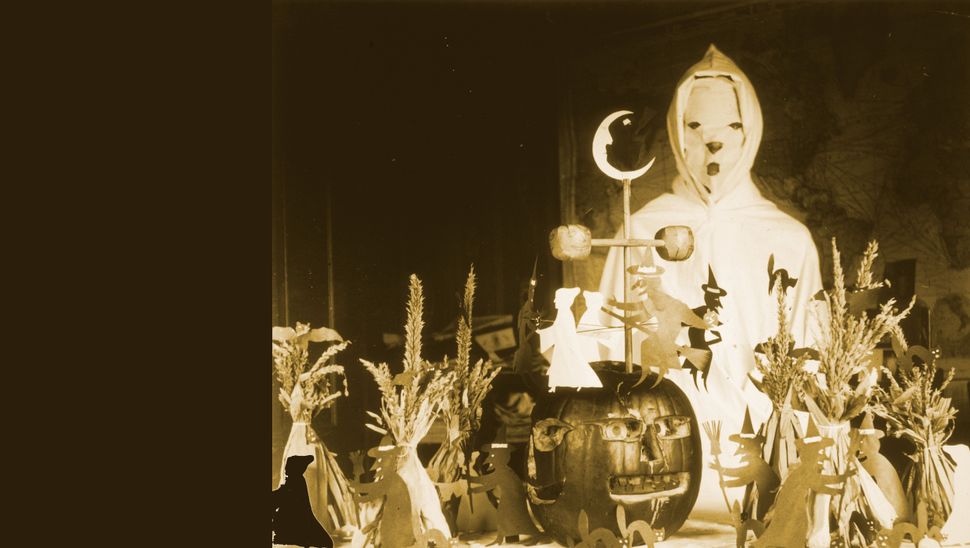 It’s difficult today to look at the orange-and-black paper scenery behind toddlers in ghost costumes and imagine just how disturbing Halloween was a century ago.

For the Jewish community — coming from Europe — the devilish practices of Halloween were not only bewildering but also threatening. Yes, we could come to terms with people walking the streets dressed in costumes, but it was harder to understand an alien custom where people banged on our front doors demanding goods — promising retribution if they weren’t satisfied. “Trick or treat” seemed, if not quite a pogrom, a lose-lose proposition. As indeed perhaps it still does.

Anarchic festivals are scary. And the first step for the Jewish community in coming to terms with American Halloween was being able to understand it.

After largely ignoring Halloween before the war, the Forward published a series of long, historical articles in the 1950s explaining the holiday’s Christian and pre-Christian religious roots. They also, helpfully, described how to avoid “brats” who might “break milk bottles or stuff up your buzzer with pins so it doesn’t stop droning.”

As always, for the Forward’s writers, the frame of reference is Jewish ritual. Here’s Jay Grayson on October 31, 1951: “Halloween is actually a Christian holiday. It’s a type of yizkor, memorial day, for the Christian Saints.”

Grayson is also gleeful at Christianity’s newcomer status, happily pointing out that it is an “ancient festival that Christians took over from the ancient Druids.” He further states that the Pilgrims “ignored Halloween” and that the date of the Catholic holiday of All Saints’ Day is not actually October 31 but November 2.

Although, as S. Minesman wrote on October 30, 1958, the holiday is “a tradition older than Christendom and brings with it much damage,” the heart of the explanations center on the children. In his article about the physical and psychological dangers of this “‘international Purim for children,’” he describes “kids dressed up in costumes of ghosts and goblins, with sooty faces or wearing masks that frighten onlookers.”

By the 1980s, explanation had shaded into appreciation, and Jewish purveyors of pop culture were reveling in the possibilities of Halloween. No longer needing to refer to anything beyond the universal American experience, Steven Spielberg took a suburban Halloween and added sunshine (by moving west) as well as an actual alien to create the most iconic scene of his 1982 movie “E.T. the Extra-Terrestrial.” The result shows how bizarre Halloween can seem to an outsider but also how the holiday can, strangely, make the outsider acceptable.

At the end of that decade, in the song “Halloween Parade,” Lou Reed delighted in the polymorphous perversity of the Halloween scene in Greenwich Village:

Although the neighbors from his teenage years on suburban Long Island might have viewed Reed himself as some sort of Halloween character, by this later stage in his career he was secure in his outsider persona and could take the diversity of the festival at its face value. American Jews had become comfortable with American Halloween.

Ironically, a generation on, the cycle has come full circle. Halloween is no longer described in terms of Purim; Purim is described in terms of Halloween. The American Jewish population clearly has many strands, but enough seem to understand Purim as a Jewish Halloween to provoke a series of articles on the Huffington Post, Kveller and in these pages, pushing for an authentic Purim, untainted by the commercialized Christian-Pagan customs of American Halloween.

The worry is that we have grown so comfortable with American Halloween that it is in danger of replacing our own anarchic festival of Purim. Costumes aside, though, there aren’t really that many similarities: They have Druids and Saints, we have beauty pageants and genocide. So, though I understand the concern, I have no real anxieties that a people who have kept apart milk and meat for thousands of years won’t be able to keep apart hamentashen and pumpkins for the duration of the American republic.

However long that may be.